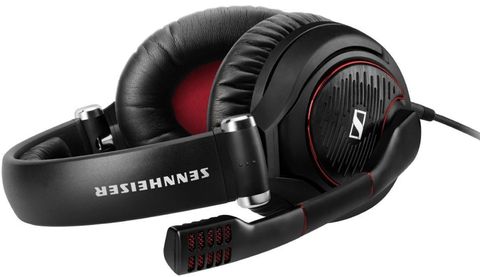 The Sennheiser Game Zero feels great, looks great and sounds great for the most part, but an overemphasis on voices holds it back.

Sennheiser’s gaming headsets generally sound good, but not great. This is unusual, given the old-school German manufacturer’s pedigree for top-quality sound. Of the company’s three gaming headsets, the Sennheiser Game Zero ($270) comes closest to delivering all-around aural excellence, and while it’s not perfect, there’s an awful lot to like. The Game Zero feels great, looks great and sounds great — most of the time. Competitive gamers will adore its high-quality microphone and immersive in-game sound, but audiophiles and single-player adventurers might not appreciate the way it handles voices.

Unlike Sennheiser’s bulky, difficult-to-transport GSP 300 and Game One headsets, the Game Zero has portability in mind. The headset is either white or black with shiny red highlights, but unlike the Game One, the Game Zero also sports a thin, flexible headband and foldable ear cups. A small, handsome carrying case comes with the headset, making it incredibly easy to transport it. While the boom mic on the left ear cup isn't detachable, the carrying case and foldable design make it feasible to bring the Game Zero along on your everyday trips.

Like Sennheiser’s other two headsets, the Game Zero sports a well-hidden volume wheel on the right ear cup. Beyond that, the manufacturer has kept things pretty simple. The device connects via either one or two 3.5-millimeter audio jacks, depending on whether your setup has separate or integrated ports for microphone and audio. You can swap out the two different cables, and there’s room in the carrying case for both, which should help keep things pretty orderly.

The Game Zero is easily the most comfortable gaming headset Sennheiser has ever made. With plush, breathable faux-leather ear cups, the 10.6-ounce peripheral felt almost weightless. Since the ear cups swivel and the headband can expand and contract easily, finding the perfect fit took only a few seconds. I wore the headset for hours, both gaming and working, and didn’t feel like taking them off once, either time. Even my glasses and large Jewfro didn’t do much to get in the way.

When a co-worker tested the Game Zero, he said that the headset was comfortable overall, and he especially appreciated that the ear cups make a good seal around the bottom of the ears. He didn’t find the ear cups and headband to be quite as soft as I did, though.

When I tested the Game Zero, I was expecting perfect performance across the board. What I got instead was a little unsettling. The headset positively excelled when it came to Overwatch, letting me hear my opponents’ movements and my allies’ calls for help with crystal clarity as I floated around the battlefield as Mercy. Likewise, the headset struck a rich balance between mission dialogue, sound effects and music when I took control of Terran forces in StarCraft II and Captain America in Marvel Heroes.

However, I encountered an oddity when I played The Witcher 3. While the music and sound effects reverberated across the rich soundscape, the voices sounded like they were coming from the bottom of a well. With other headsets that using immersive equalizations, I've noticed that they sometimes produce a funny, hollowing effect with voices, but since the Game Zero has no software, there’s no option to change things. I won’t say Witcher 3 was unplayable, but listening to quest dialogue was annoying instead of endearing, and I imagine that the same could hold true for other story-driven, dialogue-heavy adventures.

The Game Zero earns a wholehearted recommendation for competitive games, or single-player ones where dialogue plays a secondary role. If you’re mostly a role-playing game aficionado, though, you might have to invest in a device that handles voices better — and honestly, just about every headset on our Best Headsets list can do so.

As it does with games, the Game Zero tends to do funny things to voices in music and media. While instruments sound gorgeous and balanced, they also felt a bit muted and distant. Bass and drums are especially hard to pick up, as I learned when I listened to “The Hand of John L. Sullivan” by Flogging Molly and “Carry Me Back” by Old Crow Medicine Show.

The vocals, on the other hand, were front and center, but not in a very satisfying way. Each singer’s voice had a dull, straightforward quality that didn’t blend well with the rest of the ensemble. I felt as though I were listening to a soundscape optimized for chat rather than music or movies. At least I didn’t have any trouble understanding dialogue when I watched Black Mirror on Netflix.

I had a more mixed experience with baroque music. Bach’s Brandenburg Concertos (instrumental) sounded rich and balanced, but Handel’s "Messiah" (choral) somehow managed to be both heavy and muddled on vocals. As the owner of a pair of Sennheiser’s $150 HD25-1 II headphones, I was surprised that my much cheaper peripheral from the same company produced much better sound; there is no way that the microphone alone is worth an extra $100.

Since the Game Zero has no software, the only outstanding features are the volume control knob and its foldable nature, both discussed above. The microphone is a good one; it picked up my voice and blocked out almost all background sound when I tested it in Windows Voice Recorder. Unlike other Sennheiser mics, it even picked up my voice when it was situated above or below my mouth, rather than right next to it.

While the recording of my voice was a little too distorted for me to make a podcast or deliver a presentation online, the Game Zero’s mic more than gets the job done for in-game conversations, Skype calls and the like.

I liked the Sennheiser Game Zero, but I wanted to love it. There’s no denying that the headset is extremely comfortable and portable, and that it provides spectacular sound for competitive games. On the other hand, there’s also no denying that it overemphasizes (and sometimes distorts) voices, and its microphone alone is not worth the huge price spike over a comparable set of music headphones.

The Sennheiser Game Zero is currently the best gaming headset that the company produces, and if you’re an online gamer with a little money to burn, that’s enough. However, I believe that, given the company’s pedigree, it can create something even better in the future.