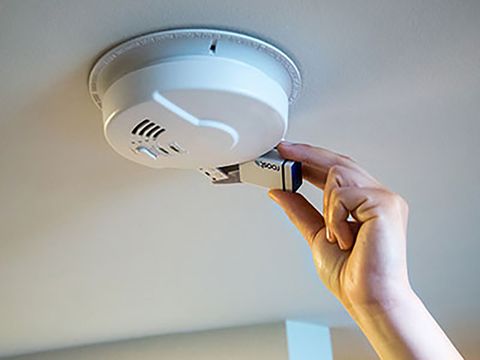 This Wi-Fi-connected battery will send an alert to your smartphone when your smoke detector goes off.

A smart smoke detector can alert your phone remotely if the sensor detects a fire or carbon monoxide in your home. But what if you have a bunch of traditional smoke detectors and don't want to spend a lot of money upgrading? Roost's Smart Battery offers a cost-effective compromise. This $35 device plugs into most any smoke detector. Not only will it alert you when the alarm sounds, but it will also let you silence the noise, temporarily, from your smartphone.

By necessity, the Roost Smart Battery's shape hasn't changed from its original version; it's the size of a 9-volt battery, but a small speaker is built into it.

The bottom end, where the smarts are housed, is removable. The Roost should be able to fit into any smoke detector that uses a 9-volt battery.

The biggest change between Roost's first- and second-generation smart battery is that the company simplified the setup process. Previously, the battery would emit a series of beeps and squeals, which would be picked up by the Roost smartphone app, as part of the configuration process.

Now, after launching the app, you merely have to connect to the battery's Wi-Fi, and then connect the battery to your home Wi-Fi network; that approach is similar to those found with most other smart home devices, such as smart plugs.

As it's only a battery, the Roost can't detect smoke or carbon monoxide. Rather, it sends you an alert when the detector in which you've installed the battery sounds an alarm. So, you'll want to make sure that whatever detector you're using is up to date and capable of picking up smoke, fire and carbon monoxide.

One of the reasons that the Nest Protect is our favorite smart smoke detector is that its photoelectric sensors can detect both smouldering and fast-burning fires, as well as carbon monoxide.

After installing the Roost into a smoke detector, I then pressed the test button on the detector. A second or two after the test alarm went off, I received an alert on my smartphone from the Roost app, which gave me the option to snooze the alarm. That's roughly the same amount of time as Nest's app took to alert me.

Roost's integration with other smart home systems is fairly limited. You can connect it to other devices only via IFTTT; by comparison, the Nest Protect can directly connect to a host of smart home devices.

If you're looking for the best smart smoke detector, the Nest Protect can't be beat. But Nest's $119 device costs roughly the same as three of Roost's batteries. If you have a bunch of traditional smoke detectors and are looking to retrofit them to make them connected, then the Roost smart battery is the way to go.