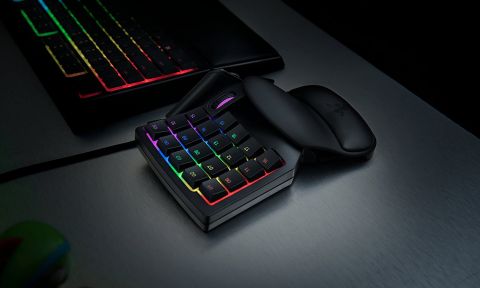 The Razer Tartarus V2 can be useful for high-level MMO players, with easily programmable buttons, but its benefits are mild for most gamers.

There's something to be said for a product that puts its best foot forward, even though it's intended for an incredibly niche audience. The Razer Tartarus V2 Chroma ($80) is one such gadget: a 25-key keypad with a directional stick and a full RGB lighting suite. It's not as versatile as a full keyboard, but it can be a boon to the hardest of hardcore gamers who don't need 104 keys to excel in their competitive games of choice.

For what it is, it works well. If you really feel like your gaming experience would be enhanced by a small, programmable keypad with a directional stick, the Tartarus V2 gets the job done (and it's much cheaper than Razer's more elaborate Orbweaver, which charges $40 more for a slightly more comfortable experience). However, it's simply not necessary for most genres — even competitive ones — and the price is hard to swallow, considering the other peripherals you could get for that amount of money.

The Tartarus V2 is what Razer calls an "ergonomic keypad," which means it's a small keyboard that has four rows of five keys apiece (except for the bottom row, where there's a scroll wheel in place of the fifth key) above a hand rest. Off to the side, there's an eight-directional D-pad, a small, circular button (Alt, by default) and a thumb button that usually functions as a space bar.

All told, there are 25 programmable buttons. That's about one-quarter as many as you'll find on a standard, full-size keyboard. If you need only a handful of keys for whatever game you're playing — or whatever graphic design project you're working on — it's easy to see the appeal.

Even so, the Tartarus V2 isn't nearly as comfortable as it could be. You can adjust the hand rest to one of two positions, but in either case, you're going to be reaching for the top row of keys and the space bar, unless you have truly enormous hands.

The button that maps to S has a little ridge to help you identify the movement keys by touch, but the bump is extremely subtle, and I found that I often reset my fingers one position to the left or right. That's inconvenient in a single-player game, dangerous in a multiplayer game and absolutely deadly in a high-stakes tournament match.

The Tartarus V2 isn't nearly as comfortable as it could be.

Otherwise, the design is neat and compact. The Tartarus V2 definitely saves a lot of room, which could be beneficial in a crowded tournament scene. At home, though, you'll probably need to use it in conjunction with a regular keyboard — not instead of one. More on that later.

One area where the Tartarus V2 loses points right off the bat is in its key structure. Instead of mechanical switches, like Razer uses in most of its high-end keyboards, the Tartarus V2 goes with Razer's "Mecha-Membrane" technology, which is also found in its very good Ornata Chroma keyboard. In a nutshell, the keycaps mimic the feel of a mechanical keyboard, while still relying on a squishy membrane underneath.

With only 25 keys, though, I have to wonder why Razer didn't just offer the full mechanical experience. (For reference: You can get a BlackWidow tenkeyless mechanical keyboard for $70 — a full $10 less than the Tartarus V2.) If you want Razer's clackety green or quiet orange switches in a keypad accessory, you'll need to pony up $120 for the Orbweaver — an amount of money that could also buy you a top-of-the-line wireless gaming mouse, full-size mechanical gaming keyboard or wired gaming headset.

Perhaps Razer's target audience for the Tartarus V2 already has all of those things, but it drives home the idea that the Tartarus V2 is a very, very niche product, even within the already-niche world of gaming accessories.

At any rate, taken on their own merits, the mecha-membrane keys are fine: While they're not as satisfying as a mechanical switch, they're not as mushy as a membrane model, either. I wasn't able to evaluate them in a typing test, since writing anything out on a keypad would be an interesting challenge (25 keys, 26 letters in the English alphabet, for one thing), but they felt responsive and comfortable.

The D-pad was the more interesting component to evaluate. At first, I thought it was a full thumbstick, like on a game controller; instead, it acts more like a set of arrow keys, with a command between each two cardinal directions. As discussed below, it can be either incredibly useful or profoundly useless, depending on your genre.

To be honest, the most remarkable feature about the Tartarus V2 is that it exists. There aren't that many small-form gaming keypads on the market, much less from major peripheral manufacturers. In terms of functionality, though, everything interesting stems from the Razer Synapse 3.0 software.

The Tartarus V2 lets you switch between three different keymaps, which is perfect for different characters in an MMO or MOBA, for different weapons layouts in an FPS or different races in an RTS.

Synapse 3.0 is still in beta, and it shows. The whole program feels sparse, with a lot of white backgrounds and space between options. Setting up Chroma lighting options requires a bit of trial and error, although it automatically syncs with other Razer products, which is a nice touch. Otherwise, you can reprogram the keys, link individual profiles with games (credit where it's due: The interface for this is really pretty) and record macros.

One useful feature of the Tartarus V2 is that you can switch between three different keymaps, which is perfect for different characters in an MMO or MOBA, for different weapons layouts in an FPS or different races in an RTS. You can also enable a "Hypershift" functionality, which completely changes what every key does when you press or hold down a button of your choice.

While setting up these options requires a lot of time (and a lot of effort, since you'll need to test and optimize your choices in-game), you could theoretically have almost 150 different commands at your fingertips in each game. The only trouble is that, by default, there are no keys assigned to enabling Hypershift or swapping keymaps. Programming them isn't hard, but it seems odd to make one of the Tartarus V2's best aspects an opt-in choice rather than an endemic feature.

I tested the Tartarus V2 extensively with StarCraft: Remastered, Overwatch and World of Warcraft in order to see how well it handled the genres in which players are most likely to employ it.

(I also toyed around with The Witcher 3 and SpellForce III to see how it might handle more traditional, single-player adventures. Short answer: Don't bother. There's no real advantage over a mouse and keyboard.)

The first thing you should know is that if you want to use the Tartarus V2 successfully, you'll have to break years' worth of keyboard habits. When I played StarCraft: Remastered, I did my level best to rely on the Tartarus V2. I programmed all of my most frequently used commands into the 25 keys, then tried to train my fingers to recognize the unfamiliar locations.

My experiment wasn't successful. Every time I needed a command that I'd forgotten to program in — such as M to train Terran Marines, or Ctrl + 1 to designate a control group — my hands would drift back toward the keyboard, and stay there until I realized that I hadn't touched the Tartarus V2 in a few minutes. Then I'd reprogram the Tartarus V2, use it again for a few minutes until I realized I'd forgotten another vital command, and repeat the process all over again.

The problem wasn't so much that the Tartarus V2 didn't work properly — it did — it's just that I didn't see any clear advantage to training myself to use a wholly new peripheral, when a keyboard is both more spacious and more familiar. (Using the D-pad to explore the minimap, on the other hand, was actually very useful, and let me micromanage my units a bit more effectively. This convenience isn't worth $80 on its own, but it has a tangible effect on gameplay.)

If you want to use the Tartarus V2 successfully, you'll have to break years' worth of keyboard habits."

Overwatch was probably where I saw the least improvement. Yes, I could assign special skills to the keypad, but the D-pad didn't have a clear purpose, and the game doesn't really benefit from macros. I'm sure there are a handful of FPS snipers who might like having the extra scroll wheel, but unless you're profoundly uncomfortable with the mouse-and-keyboard setup, I don't see the Tartarus V2 having much of an impact.

World of Warcraft is probably where the Tartarus V2 demonstrated the most utility. High-level MMO play requires a lot of buttons, and can fully leverage macros to manage complicated DPS sequences or effective healing chains. Especially since you can reprogram the keymap for different alts, MMO diehards could theoretically benefit from the Tartarus V2 — and an $80 accessory is arguably a more attractive prospect than a huge, dedicated MMO keyboard, with a price that could range up to $180.

On the other hand, a standard mouse-and-keyboard setup is still functional for most MMO players — which drives home my central criticism of the Tartarus V2. What it does, it does just fine; it's just not that helpful — or that necessary — for most players.

There's clearly a market for the Tartarus V2; after all, fans embraced the first iteration enough to demand a second one. Still, having experimented with it in some of my favorite games (admittedly, at a low competitive level), it seems a bit like a solution in search of a problem. The learning curve is steep, the price is high and the benefits are mild, at best.

The Tartarus V2 succeeds at what it sets out to do, and it's easy to program it to meet your specifications, both mechanical and aesthetic. Whether that makes it a worthwhile purchase, on the other hand, really depends on what else you could do with $80 in your life. Personally, I'd go with a nice bottle of Auchentoshan.