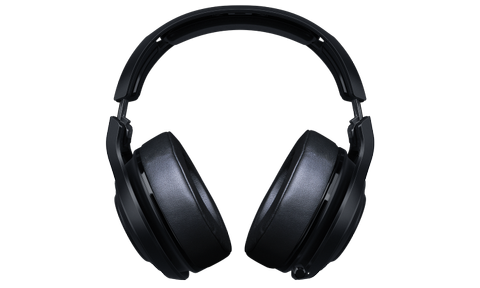 The title "Man O' War" has been given to star racehorses, powerful warships and even deadly sea creatures, all of which are known largely for one thing: dominating the competition. Perhaps it's no surprise, then, that it's also the name of Razer's latest wireless gaming headset, which is far and away one of the best sets of wireless cans I've used.

The $169 ManO'War offers stellar wireless performance on PC and PS4, complete with virtual 7.1 surround sound on the former and rich stereo on the latter. It's incredibly cozy, and its companion app offers tons of ways to tweak both its sound output and LED lighting. The ManO'War's lack of an analog cable for mobile devices and other consoles keeps it from being at the top of the pack, but it's easily one of the best-performing wireless headsets in its price range.

The all-black ManO'War is a chunky, commanding headset befitting of its name. The peripheral's positively massive ear cups sport glowing Razer logos and are held together by a similarly huge plastic headband that features the company's name emblazoned at the top. Razer's enormous headset kind of made me look like Lobot from Star Wars, but considering that it's meant to be used at home (and that I really like Star Wars), I didn't mind much. I was also simply too comfortable to complain — but more on that later.

The ManO'War's cans swivel 90 degrees, with a fully retractable mic in the left cup that's easy to hide when you don't need to chat. The headset's on-ear controls are pretty conveniently placed — there are volume knobs on the left and right ear cups for adjusting chat and game volume, respectively, and you can push them in to mute your mic or cut the sound completely. There's also a cleverly placed slot on the right cup that discreetly stores the headset's small wireless dongle when it's not in use.

Like pretty much every Razer gadget in existence, the ManO'War features customizable LED lights that can be programmed to glow any of 16.8 million colors. But unlike many other gaming accessories, the ManO'War's lighting is subtle and slick — most of the time, the headset's two glowing Razer logos simply look like painted-on graphics that happen to change color.

The ManO'War defaults to Razer's chameleon-like spectrum cycling mode, which has the lights slowly run through the colors of the rainbow. You can also choose a single color to glow statically, or have your favorite hue pulsate in and out in breathing mode. If you have any of Razer's Chroma-enabled mice or keyboards, you can have the headset's lights sync up to them with a single click in the Synapse app.

Of course, the need for headset lighting is debatable — after all, you can't see it yourself when you're wearing the cans. Still, if you want to give your Twitch viewers something cool to look at or just insist that all of your gaming gadgets light up in cool colors, you'll find the ManO'War's lighting is implemented well.

The ManO'War is supremely comfortable, largely thanks to its thick and spacious leatherette-coated ear cups that felt like marshmallows over my ears. It also helps that Razer's huge-looking headset is just 0.83 pounds — I rarely got the urge to take the cans off, even after hours of play.

The ManO'War's headband also sports a generous layer of faux leather to keep your dome comfy, and can be raised or lowered about an inch to suit your head. Its ear cups swivel up and down slightly, further enhancing the headset's ability to adjust itself to various head shapes and sizes.

Whether I was engaging in competitive multiplayer or getting lost in immersive solo adventures, the ManO'War's virtual 7.1-channel surround sound was impressively enveloping on every PC game I played.

Razer's headset made it a bit easier to stay alive in team shooter Overwatch, as I could easily pinpoint where enemy footsteps and gunfire were coming from. The headset was just as handy for getting lost in Batman: Arkham Knight's moody Gotham City — I could clearly hear tiny details, such as raindrops and the fluttering of the Dark Knight's cape, but I also enjoyed a beefy, bone-crunching sense of impact every time I broke a thug's jaw.

While the ManO'War is primarily a PC headset, I was pleased with how wonderfully it worked with my PS4 — once I stuck the dongle in the console's USB port, I was good to go. While the ManO'War is limited to stereo sound on PS4 (and can't be customized via the Synapse app), it still sounded great in my testing. The headset made Street Fighter V's punches and kicks sound satisfying while still highlighting the guitar-laden background music, and the detailed sounds of screeching tires and bouncing soccer balls made it easy to keep up with a hectic Rocket League match.

You can confidently game wirelessly from the couch with the ManO'War, which utilizes a 2.4-GHz wireless connection to offer virtually lagless audio at up to 12 meters (about 39 feet). I never experienced any latency or crackling when gaming roughly 10 feet away from my PC, nor did I have any issues when sitting 8 feet away from my PS4 on my couch.

I was able to walk around the entirety of my small apartment without losing a signal, and the headset only faded when I left my place, walked down my hallway and entered a stairway about 30 feet away. If that's not enough range for you, you can gain an extra 6 feet or so by plugging the included extension cord into your PC or PS4.

As with any Razer peripheral, the ManO'War can be customized to your heart's content via the company's superrobust Synapse app. Aside from the aforementioned lighting options, Synapse lets you fine-tune the headset's audio via an equalizer as well as turn on special features like Bass Boost and Voice Clarity, the latter of which filters incoming chat. You can also calibrate the ManO'War's surround sound to make sure it's as directionally accurate as possible.

If you have multiple games and apps open, Synapse's mixer lets you adjust the volume levels for each individual program, as well as choose between surround and stereo sound for each app. You can adjust the mic volume and sensitivity, as well as activate volume normalization and ambient noise reduction. The former feature keeps the volume from jumping wildly even as your voice grows louder, while the latter helps filter out background noise.

The ManO'War's retractable boom mic is very flexible and sports a convenient LED strip at the edge that lights up red when you're muted. When I chatted with a co-worker on Skype, she told me that my voice sounded impressively clear — clearer than on many of the recent headsets I tested, such as the HyperX Cloud Revolver.

I also listened to a recording of myself that I made with the headset. Not only was my voice crisp, but the sounds of construction happening outside my window were virtually nonexistent. I'd be happy taking this microphone into a heated online battle, and wouldn't even mind using it for a podcast in a pinch.

My only real gripe with the ManO'War is the lack of an analog 3.5mm cable for using the headset with mobile devices (or for when you're simply out of juice). Considering Logitech's similarly priced G933 headset offers wired and wireless options, it would have been nice to have the wired option on Razer's latest headset as well, particularly because its cozy design and rich soundstage would be perfect for kicking back with my smartphone's music library.

The ManO'War promises 14 hours of battery life on a charge, or 20 hours with the Chroma lighting turned off. Either way, that's more than the 12 hours that Logitech's G633 is designed to last. After two days of on-and-off play, I had yet to get a low-battery warning on Razer's headset, perhaps partly because the ManO'War automatically powers down if you don't use it for a while.

The $169 Razer ManO'War comes startlingly close to being the perfect headset — at least for my needs. It's easily one of the coziest set of cans I've ever worn, and its rich audio output proved to be thoroughly immersive on both PC and PS4. The headset's wireless performance is virtually flawless, and its accompanying software makes it easy to tweak sound or sync its lights up with your other Razer accessories.

Because the ManO'War works so well, it's extra disappointing that there's no included analog cable for enjoying the headset on a mobile device or Xbox One. There's also its blatantly bulky design, which would probably keep me from wearing the headset out in public even if I could. Logitech's G933 Artemis Spectrum offers similarly excellent sound with both wired and wireless options, and can be found for the same price. Still, if you don't mind being limited to PC and PS4, the Razer ManO'War is one of the best wireless headsets around.