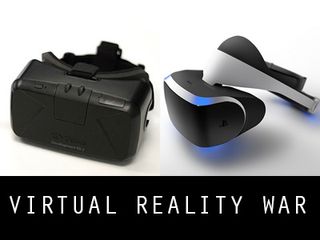 Forget the console wars: Gaming's next big battle will be taking place in virtual reality. Just as the Oculus Rift virtual-reality headset was on its way to becoming a household name, Sony got in on the fun by unveiling Project Morpheus, a similar apparatus that will immerse PS4 owners in their favorite titles.

These devices have some sharp differences, but it's clear that both Sony and Oculus are fighting to bring virtual reality to the masses. Here's how the two headsets stack up, based on what we know so far.

The original Oculus Rift development kit looked kind of like a small tablet slapped onto a pair of ski goggles, but the VR headset has received a much sleeker redesign for its Development Kit 2 iteration. The internal screen and its surrounding body now look seamlessly woven together, resulting in an all-black, 0.97-pound brick with Velcro straps that keep the device attached to your head.

MORE: What Is Oculus Rift?

Oculus' DK2 looks comfortable but fairly bland next to Sony's stylish Morpheus prototype. Sony's curvier headset is also primarily black, but the color is offset by a few inviting streaks of white around the front and on the head strap. Like the PS4's DualShock 4 controller, the Morpheus emits a warm, blue glow on its edges. Morpheus can slip over eyeglasses and will support any headphones the user chooses to wear. At least at this stage, Sony's headset just looks cooler and more futuristic.

As the term "virtual reality" implies, both Oculus and Morpheus use accelerometers and gyroscopes to create an immersive field of view, in which you can look around the game world as if it were your actual environment. There are some slight differences, however, in how these two devices deliver the VR experience.

The latest version of the Oculus Rift touts a resolution of 1080 x 960 pixels per eye, with a refresh rate of up to 75 Hz. The headset has an update rate of 1000 Hz for internal tracking, as well as a 60-Hz update rate for positional tracking. The Oculus DK2 includes an HDMI-to-DVI adapter, a DC power adapter and alternate lens cups for nearsighted gamers.

We don't know nearly as much about the guts of the just-announced Morpheus. The Sony headset has 1080p video output and a 90-degree field of view, compared with the 100-degree view the Oculus DK 2 provides. The PS4 peripheral will be compatible with the PlayStation Camera, the DualShock 4 gamepad and the PlayStation Move motion-control accessory.

Here's where the sharpest lines are drawn between the two headsets. The Oculus Rift and Project Morpheus are built for completely different platforms.

The current iteration of the Oculus Rift development kit is built for PC, Mac and Linux, and there are plans to bring the headset to Android devices. There are already a few dozen Oculus-supported games out now or in development, including the horror title "Alone" and the racing simulator "Live for Speed." Because the Oculus Rift supports common game-development engines, such as Unity and the Unreal Engine, it's likely we'll see more Oculus-ready games pop up as programmers become comfortable with the platform.

Because it's a PS4 accessory, Morpheus will almost certainly be tied exclusively to Sony's console. Sony has yet to announce any specific titles that will launch with Morpheus support, though the VR headset was being demonstrated at GDC 2014 with Square Enix's popular stealth game "Thief."

Sony has yet to announce a price or release date for Project Morpheus, if that's even the product's final name. You can preorder an Oculus Rift Development Kit 2 now for $350, though there's still no word on an official mainstream release.

Price will play a huge role in the success or failure of the headsets. Gamers might be willing to pay a premium for a virtual-reality experience but might not be as likely to if they've already dropped a few hundred bucks on their console or PC gaming rig.

Both Oculus and Sony have shown that they're heavily committed to VR, and the Oculus Rift and Morpheus have the potential to take gaming in some exciting and immersive directions. It's far too early to predict which of these two headsets will be embraced as an everyday gaming accessory, though the Oculus Rift does enjoy the advantage of having been in developers' hands for at least a year now.

Oculus Rift might have wider platform support (including mobile), but Sony's Morpheus could be the first product to successfully bring virtual reality to the living-room console experience, especially with its built-in compatibility with existing PS4 accessories. After all, who wouldn't want to play Sony-exclusive hits like "Uncharted" and "The Last of Us" from the first-person (rather than third-person) point of view?

For both platforms, developer support, comfort and overall performance are going to be key, and we very much look forward to testing the final consumer versions of both VR devices.