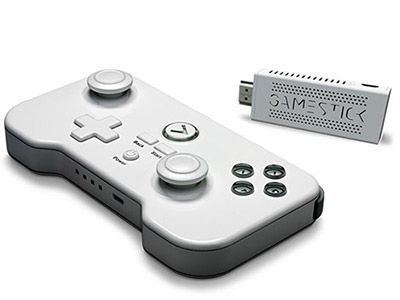 The $79 PlayJam GameStick is an entertaining Android console for kids and casual gamers, but it needs more software to become a must-buy.

Android gaming consoles are developing a market all their own, allowing casual players to enjoy mobile games on their TVs. PlayJam's GameStick is one of the newest devices of this kind, packing a big-screen gaming experience within a small HDMI stick. The $79 console is easy to use and provides access to cheap, fun games, but it's a few apps away from greatness.

No bigger than a Nestle KitKat, the 2.8 x 1.1 x 0.4-inch, 0.75-ounce GameStick is a small, white-plastic device that looks a bit like Google's Chromecast and is easier to stick in your pocket than the cube-shaped, 2.9 x 2.9 x 3.2-inch, 11-ounce Ouya. The stick has perforations throughout to keep it cool, including a carved-out GameStick logo on the front and back.

The GameStick's top edge has a microUSB port, as well as a miniscule reset button that requires a fingernail to activate. On the opposite side of the stick's HDMI input is a microSD slot for up to 32GB of extra storage.

MORE: How to Backup Your Android Device

The GameStick's white-plastic controller combines the flat, rectangular design of classic Nintendo gamepads with the button layout of modern Xbox 360 and PlayStation 3 peripherals. The wireless controller can be charged via microUSB and connects to the GameStick via Bluetooth 4.0.

The GameStick pad has two control sticks: one on the upper left and another on the bottom right. There's a directional pad on the bottom left, while the A, B, X and Y buttons rest on the top right. Power, Back, Start and the Home button can all be found in the middle.

The gamepad's top edge has a shoulder button on each side, as well as a compartment for storing the GameStick itself. The bottom edge has four LED lights that identify whether you're player one, two, three or four during multiplayer games. Next to the indicator is a microUSB port for charging the controller.

The 6-ounce GameStick controller feels comfortable and intuitive, especially if you're used to a console gamepad. The plastic build felt solid in our hands, and we had no trouble navigating our thumbs across the various buttons. Each control stick provides a satisfying click when you apply pressure, though we wish the A,B,X and Y face buttons were a bit more springy.

While the GameStick gamepad has a button layout almost identical to that of the Ouya controller, the latter accessory has a more modern shape with two long hand grips, similar to those found on the PlayStation 3 controller. However, the Ouya controller runs on disposable batteries, lacks the Start and Select buttons of the GameStick, and weighs a bit more, at 9.7 ounces.

The device turns on as soon as it's plugged in and powered. The software setup process is brief, as you'll just need to set up a GameStick account with a username and password, and connect to a Wi-Fi network.

GameStick's user interface has a sleek, black-and-silver aesthetic. The UI isn't too different than that of the Ouya, with easy-to-navigate menus and large, colorful tiles that display featured and popular games.

Four black tabs on the left side of the screen make up GameStick's main menu, which includes Games, Media, Profile and Settings. The Games tab allows users to sort through the GameStick library, which can be organized by featured content, popular content or Play Now, which only shows games already downloaded to the console.

Under the Profile tab, users can add credit to their GameStick account via credit card or redemption code. This menu contains four parental-control filters, which allow owners to enable content for ages 3 and up, 7 and up, 12 and up or 17 and up. You'll need to enter your GameStick password to change the filter, which reduces the chance of your little one turning off the mature filter. Unfortunately, the GameStick does not support multiple profiles.

The Settings menu has a bevy of options, including an App Manager for viewing downloads and deleting games, and a Controller Pairing menu for managing multiple gamepads. There's also the standard gamut of console settings, including Wi-Fi, Sound and Display, Screen Position, and Language Select.