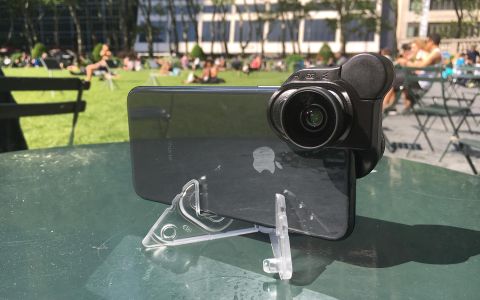 The Olloclip Mobile Photography Box Set is the iPhone X lens kit to get, thanks to three quality interchangeable lenses that work with all the phone's cameras.

The iPhone has traditionally had one of the better smartphone cameras, and Olloclip has traditionally had one of the better clip-on lens kits for Apple's smartphone. No reason to change for the iPhone X; its new Mobile Photography Box Set ($99) includes  excellent fisheye, super-wide and 15X macro lenses in a novel and practical housing that makes them easy to swap. And they work with all three of the iPhone X's lenses, making this the best all-around iPhone lens kit.

What's in the Box

For the iPhone X, Olloclip created a new lens clip, which allows you to use its lenses  with both of the rear cameras as well as the front camera. The lens clip, which is spring-loaded, is designed to accommodate the increased thickness of a phone with a screen protector, but not those phones with a case.

The lenses themselves attach to the clip using the spring-loaded tab. Most other companies' lens kits have screw mounts, which are secure but take longer to attach. Olloclip's method is both secure and fast.

The Olloclip also comes with a clear plastic clip that the lenses can attach to when not on your camera. The clip even opens to act as a stand, so you can prop up your iPhone when you want to get a group shot, for instance. It's handy, but the stand had a tendency to close on itself, causing the phone to fall.

I tested the Olloclip Mobile Photography Box Set ($99), which comes with super-wide, fisheye, and macro lenses. The company also makes an 155-degree ultra-wide ($44.99) and a 2X telephoto lens ($59), which can be purchased separately.

In general, the photos I took of Bryant Park were very good, but there was softness on the edges of the photo, and some chromatic aberration (purple and red fringing) around the skyscrapers on either side of the frame.

Hitcase's TrueLux Wide lens (which has 111-degree FOV) was comparable in quality, with some areas sharper, and some softer, than Olloclip's. The Shiftcam Travel's wide lens not only had a smaller field of view, but also  a smaller area that was in focus and even greater chromatic aberrations at the edges.

Capturing a full 180 degrees, Olloclip's fisheye lens performed pretty well. A large portion of the center of the frame was in focus, with only minimal distortion around the edges, which is to be expected. The fall-off in quality from the center to the edge was much more pronounced than with the super-wide lens.

I also found that photos taken with the fisheye lens had a bit of haziness, and less contrast, than a photo taken without any lenses.

Still, it's a lot of fun for taking a photo of a huge group of people, or if you want an artistically distorted close-up of an object, like this cat's face.

The Olloclip's macro lens was almost too powerful for its own good. Most other macro lenses have a 10X magnification, but Olloclip's 15X magnification lets you get really close. For example, I could see every single pore on my cat's nose, as well as individual strands of fur.

The macro lens also has a very narrow depth of field, so only objects within an eighth or an inch or so will be in focus.

Although it's not part of the Mobile Photography Box Set, Olloclip also sent its 2X telephoto lens ($59) to test. While it gets impressively close compared with the iPhone’s 2X lens — I could make out details on the upper level of the Empire State Building — only the very center of the images were completely clear.

For example, in the aforementioned shot, both the spire and the lower levels of the iconic skyscraper were blurred, and surrounding buildings exhibited fringing along their edges. Here, the difference between Olloclip's telephoto lens and premium lenses, such as those from Moment, Sandmarc and Shiftcam, are readily apparent; the latter three produce images that are far clearer, edge to edge. Still, those lenses are $90 apiece, nearly twice as much as Olloclip's.

Olloclip's iPhone X lens kit is a great middle ground between high-end, high-quality lenses such as Moment's, which can cost $90 each, and the myriad low-quality sub-$20 lenses that litter Amazon. For $99, you get three lenses that not only take very good photos but can be used with any of the iPhone X's cameras, making this the best overall lens kit for Apple's top smartphone.