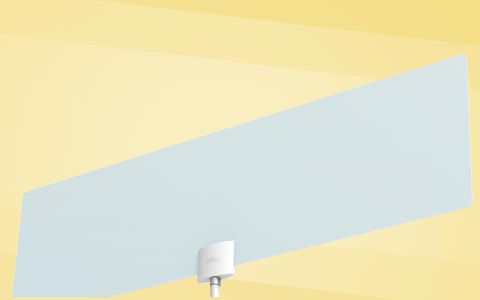 The Mohu Chroma is an able-enough flat, amplified indoor antenna. We just expected it to deliver more, given its larger-than-average size.

The road to the best reception isn't always paved with the best design intentions. Mohu's Chroma is a case where its design conception — a big wingspan that should lead to superior VHF reception — doesn't fully deliver. And given its relatively high $70 price, there are less expensive models (even from Mohu) with fewer ambitions but better performance.

Choosing one or the other may help camouflage this otherwise large flat antenna, which stretches a full 25 inches from side to side (versus a typical 12-inch square antenna, like the ClearStream Flex).

To help find the best position for this indoor model, Mohu includes a 16-foot coaxial cable with an inline amplifier that the company says is designed to filter out FM and cellular interference.

Mohu includes clear, logically laid out instructions for neophytes, as well as some sensible advice for owners having trouble tuning in stations (e.g., keep the antenna away from metal). The company also mentions that reception might improve in some situations without the amplifier (we tested it with and without amplification). Before you install it, we also recommend looking up what over-the-air broadcasts are available in your area at Antenna Web.

Like most flexible flat antenna designs, the Mohu Chroma is meant to be installed on a wall (using supplied push pins) or to a window using four included Velcro-style stickers. The inline amplifier has to be plugged into a power outlet. Alternately, you can plug it into a powered USB outlet on your TV, if one is available. We plugged it into its own outlet and also tested it without amplification by simply plugging directly into the set with the detachable coaxial cable.

With the inline amplifier powered up and connected to our test Samsung KS9000 4K TV, we initially found 35 stations with the Mohu Chroma. Further testing revealed that of those, 13 were too distorted or intermittent to be viewed consistently, leaving a total of 22 watchable stations in our area. (By way of comparison, the amplified $80 ClearStream Flex pulled in over 50 watchable channels in our tests.)

Lower channels from Fox and ABC looked solid and even the subchannels, such as Movies!, which was showing In a Lonely Place, looked crisp and clear. The antenna also captured higher stations, from the likes of Azteca and Umas.

On the other hand, the Mohu Chroma failed to tune in the local NBC affiliate, as well as two popular PBS stations. So overall, its performance proved to be something of a mixed bag and disappointing given the greater physical breadth of this antenna.

Depending on your location, amplifiers can sometimes do more harm than good (creating more interference between competing channels), so we also tested the Mohu Chroma without the inline amp. We managed to get slightly better reception this time, for an initial listing of 36 channels, 25 of which we found were watchable. The main difference was that in this mode, the Mohu Chroma pulled in some stations that were marginal before, such as the two HSN channels. We still failed to receive the NBC and PBS channels, however.

Given its size, and the fact that it includes an amplifier, we expected more from the Mohu Chroma. True, it will receive more stations than most $10 bare-bones models. But for the same price, we prefer the Mohu Curve 50. It pulled in over twice as many stations in our tests, and it comes in a tabletop design with a solid stand. You might not be able to hide the Curve as well as the Chroma, but you'll get more video entertainment out of it.