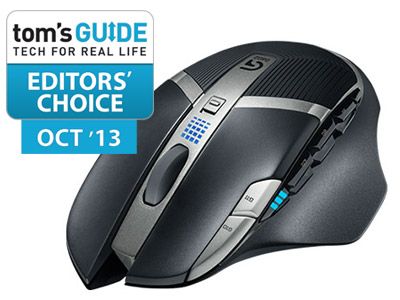 The mouse is the most important weapon for any hardcore PC gamer, and many players require more than three click buttons to stay on top of the leaderboards. Logitech's G602 gaming mouse is built to satisfy that need, packing a host of extra keys and two performance modes for optimizing battery usage. Read on to find out if this $79 accessory deserves a place in your arsenal.

While some gaming mice look like the jangled result of a tech lab accident, the G602 manages to pack all of its features within a sleek aesthetic. The mouse's two black click buttons are long with bladelike edges, and the gray strip of plastic between them hosts the scroll wheel as well as a switch for toggling performance modes.

The G602's black rubber palm rest is ridged, while a rougher texture wraps around the side of the mouse to keep your hand in place. This material protrudes out of the left side of the mouse, providing a comfortable thumb rest. The various materials that make up the G602's body were extremely resistant to fingerprints, even after long hours of use.

The bottom of the mouse has a weblike pattern, with a power switch and 2500 DPI LED sensor in the middle. Just under the sensor is a removable bottom panel that covers up the two included AA batteries. The mouse can run on a single battery if you want to shed some weight in exchange for less endurance.

Two rows of three black plastic buttons each sit on the G602's left edge, numbered G4 to G9 (the first three buttons are left, right and middle click). An additional two keys for adjusting mouse sensitivity sit next to the left click button, bringing the total count to 11. A striped baby blue LED indicator just under the G11 button shows which of the five sensitivity levels you have toggled.

The G10 and G11 buttons provide springy feedback, while the more gameplay-minded G4 to G9 buttons are a bit more resistant.

While the G602 has a hefty helping of extra buttons, it's worth noting that the mouse lacks the larger 12-button number pads of the Razer Naga and Logitech G600, both of which match the G602's retail value of $79.

You'll need Windows 8, 7, Vista or Mac OS X 10.6.8 in order to bring the G602 into battle. To get the mouse running on our Windows 7 PC, all we had to do was plug in the included 2.4-GHz USB wireless receiver and wait for a quick automatic driver to download.

The included 2.4-GHz receiver is designed to interact with the mouse from as far as 3 meters away, and there's an included extension cable if you need extra range.

Once the G602 is operational, you can download the optional Logitech Gaming Software to customize your playing preferences. You can use this application to assign functions for each of the buttons and adjust various sensitivity levels.

Once you've found the perfect setup, you can store multiple profiles within the mouse via on-board memory, which will keep your settings consistent from one game to the next.

If you'd rather have your control layout change on a game-by-game basis, you can toggle the software's "automatic game detection" feature, which allows you to create custom profiles for a bevy of popular PC games such as "Bioshock," "Assassin's Creed," and "League of Legends." If your game of choice isn't on the software's list, you can simply add it in.

The Logitech Gaming Software is easy to use, even if you're not a gaming pro. You'll see an image of the G602 when customizing controls, and assigning a command is as simple as clicking the corresponding button and selecting "Edit."