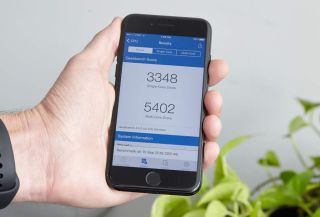 The iPhone 7's new A10 Fusion processor has gotten lost in most of the hype around the missing iPhone jack, but it shouldn't. In fact, based on our performance tests thus far, the iPhone 7 beats every major recent Android flagship phone. By a wide margin.

Take the relatively new Geekbench 4 test, which has been updated to model real-world tasks and applications. On the mutli-core portion of the CPU performance test, the iPhone 7 scored 5,507. That obliterates the 3,918 score from the Galaxy S7. In other words, the iPhone 7 is 33 percent faster.

We saw similar results from other premium Android phones, such as the LG G5, which notched 3,737 on the same Geekbench 4 test. However, the OnePlus 3, which benefits from 6GB of RAM, hit a fairly high 4,171.

MORE: Best Lightning Headphones and Earbuds For Your iPhone 7

We also measured browser performance on the iPhone 7 and Android competition using the JetStream Javascript benchmark. And once again Apple's phone came out on top. It scored 169.04, compared with 44 for the Galaxy S7 and the low 50s for the LG G5 and OnePlus 3.

We're still in the process of running other tests, so stay tuned for our full review.