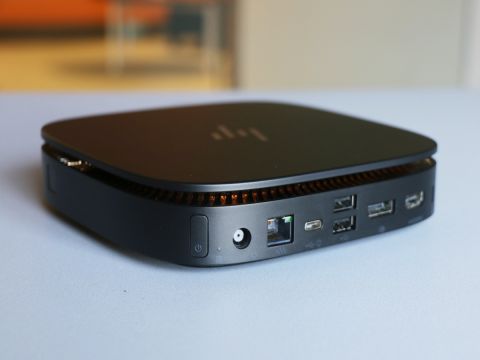 The HP Elite Slice is a stackable system that gives you a highly capable mini PC with an array of custom features.

The HP Elite Slice ($699 starting, $1,217 as tested) puts the power of a business desktop into a tiny package. It offers all sorts of business-friendly features, with a modular design that lets you mix and match to get your ideal system. Options include a DVD/CD drive, a module that serves as a security mount and a set of Bang & Olufsen speakers with a noise-cancelling mic for conference calls.

With strong performance, a handful of useful modules and covers to choose from, and an elegant design, the HP Elite Slice should show up in offices soon.

The compact Elite Slice desktop has a charcoal-gray finish with a stylized HP logo across the lid. Around the top of the mini desktop is a vent for heat and air, but HP adds some functional flair with copper cooling elements that double as visual accents.

Stacked like the layers of a Big Mac, the modular design starts with the HP Elite Slice on top. It has a compact, square-shaped design reminiscent of the Mac mini or the Asus VivoPC, and measures 6.5 x 6.5 x 1.4 inches.

This core unit can be expanded with a number of accessory modules, which stack underneath it. These modules have a nested design with an integrated USB-C connector that fits a corresponding proprietary socket on the underside of each module, including the core unit. The whole thing locks into place with a handy push-button latch that prevents accidental disconnection. The design is similar, in many respects, to that of the Lenovo ThinkPad Stack, but it's built around a functional desktop PC, whereas the Lenovo served as a collection of accessories.

On the back of the Elite Slice core unit is a modest selection of ports, with two USB 3.0 ports, a pair of USB Type-C ports (one with DisplayPort support), full-size HDMI and DisplayPort connections, and a Gigabit Ethernet port. On the side of the device is an integrated fingerprint sensor, while a Kensington case lock slot lets you anchor the small PC to your desktop.

On the bottom of the Elite Slice is a specialized USB-C connector for attaching additional Slice modules. Internally, the system has wireless connectivity for 802.11ac Wi-Fi and Bluetooth with optional TPM. An audio jack lets you connect standard speakers, headphones or a headset.

The Bang & Olufsen-equipped Audio Module offers surprisingly robust sound, with very good bass. Conference-call features over Skype sounded great, with excellent voice pickup and clear audio. Without the module, the HP Elite Slice has no audio, so you'll need to either opt for the HP Audio Module or connect a set of external speakers through the standard audio jack.

The HP ODD Module is a straightforward addition that adds a CD/DVD drive to the compact desktop. Disk-based media is becoming less common but is still an essential feature for many business systems, so the fact that this feature is optional and easy to install is a real boon to business users.

A second option for customization is the top panel of the tiny PC, where HP offers two different configurations with functional faceplates. The first is called the Charging Cover and offers wireless Qi charging for powering smartphones and smaller tablets without plugging in. The other is the Collaboration Cover, which supports Skype and Skype for Business conference calling. It includes touch controls for initiating a call, muting the internal microphone, adjusting speaker volume and ending a call. Our unit came equipped with the Collaboration Cover.

In our testing, the Skype-enabled conference calling of the Collaboration Cover worked quite well. Once you were logged in to Skype, calls were easy to make and the audio controls all worked without any problems.

Our review unit was the Elite Slice with Collaboration Cover, and modules for an optical drive and enhanced audio. Additionally, the compact desktop comes with a wired keyboard and wired mouse, along with a power cable.

As with most desktop PCs, you'll need to provide your own monitor. You may also want to invest in a USB hub if you frequently rely on USB 3.0 or 2.0 storage and peripherals, because the system's two USB 3.0 ports are filled by the included keyboard and mouse. If you've already made the switch to USB Type-C, then you won't have the same problem.

The included keyboard is adequate, but average for a bundled device, with 1.6 millimeters of key travel and a silicone membrane-switch design. In the 10FastFingers.com typing test, I hit 70 words per minute, below my usual 80 wpm, and I was more error prone than usual. The included mouse is also functional but uninspiring. It's a very basic optical mouse with a ratcheting scroll wheel.

Our review unit came equipped with a 2.8-GHz Intel Core i7-6700T processor, paired with 8GB of memory and a 512GB solid-state drive. The presence of an Intel Core i7 processor puts the HP Elite Slice head and shoulders above most mini PCs, which are frequently outfitted with low-powered processors from Intel's Atom, Celeron and Pentium lines. I felt the difference during everyday use; streaming video while having 15 browser tabs open didn't bog down the system.

It also chewed through our OpenOffice spreadsheet macro test, matching 20,000 names with their addresses in 4 minutes 5 seconds. That's dramatically faster than the Asus VivoPC (9:48), which is itself much faster than the Kangaroo Mobile Desktop (17:56) and the Intel Compute Stick, 2nd Gen (18:00).

With integrated Intel HD Graphics 530, the Elite Slice isn't made for graphics-intensive tasks like gaming, but it should be more than adequate for most office uses. It ran through the Dirt 3 gaming benchmark at 30.4 frames per second, just barely making our 30-fps playability threshold.

On 3DMark Ice Storm Unlimited, a general graphics benchmark, the Elite Slice scored 81,930. That's considerably better than the Asus VivoPC ( 22,597) and Kangaroo Mobile Desktop (16,037), and puts the Elite Slice in the same category as many standard office desktops.

The base model of the Elite Slice sells for $699 and comes equipped with an Intel Core i3 processor, 4GB of RAM and a 500GB hard drive, and sells without any additional modules or covers. Configuration options include your choice of Intel Core i3, i5 or i7 processors; up to 32GB of RAM; and an array of hard drive and solid-state storage options up to 512GB with optional OPAL-compliant self-encrypted drives.

Our review unit sells for $1,009 as the Slice with Collaboration Cover, and boasts an Intel Core i7-6700T processor, 8GB of memory and a 512GB solid-state drive. It comes with the HP ODD Module, HP Audio Module and Collaboration Cover for conference calling.

The HP Elite Slice offers exactly as much PC as you need, and nothing more. The compact size and business-friendly features make it a great choice for conference rooms or offices, and the built-in conference-calling features will be a welcome addition to anyone who spends a lot of time phoning in to meetings. The fact that HP outfits the Elite Slice with desktop-class hardware means you'll get far better performance than most mini PCs can offer, but the modular design makes it an odd fit for mainstream users.

This design also makes updating and improving the system straightforward, but adds the wrinkle of having to buy expansion modules through HP. That introduces the same problem seen on other modular systems, where you'll be limited to what HP has available and pay a premium for what is fairly basic hardware.

If you want a smaller desktop PC without the stackable modules, the Asus VivoPC is a decent option, so long as you can accept the less powerful performance it offers. But if you want something that's as compact as it is powerful, the Elite Slice is worth the splurge.