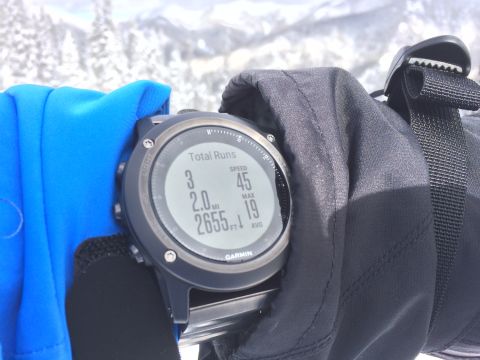 If you want a GPS watch to track everything and anything in the great outdoors, the Garmin fenix 3 is the one to get.

When you're in the great outdoors, it helps to know where you're going and where you've come from. The Garmin fenix 3 Sapphire GPS watch not only tracks a wide range of activities — from skiing to canoeing to hiking — but also has excellent battery life as well as a bevy of sensors that tell you your altitude, the temperature and even if the weather's about to turn for the worse. At $599, the fenix 3 Sapphire isn't cheap, but if you need a dependable watch when you're communing with Mother Nature, this is the one to get.

Wearing the Garmin fenix 3 Sapphire is like having a tank on your wrist. Its case and strap are made of titanium, while the bright 1.2-inch color LCD is protected by — you guessed it — sapphire. It's a tough, muscular-looking timepiece that looks massive on thinner wrists. I tested the model with a gray finish, but it's also available in a rose-gold tone with a white band, silver with a leather band, and gray with a leather strap.

The right side of the watch has two buttons for starting and stopping activities, while the left has three buttons. The lower two let you cycle through menus, while the top one turns on the backlight.

Measuring 2 inches in diameter and 0.6 inches thick and weighing 4.8 ounces with the titanium band, the fenix 3 is so heavy that I wouldn't want to use it for running. The weight drops to 2.8 ounces if you go with the silicone band, but even then, I'd rather stick with one of Garmin's lighter GPS watches for running, such as the 1.9-ounce Forerunner 225.

The watch is water-resistant to 10 ATM, which equates to about 330 feet. So, you can take the fenix 3 diving, although there are no scuba-specific features, such as a dive calculator.

The metal band that came with the fenix 3 was too big for my wrist. You can have a jeweler take out links, but I actually preferred having the extra links, as it allowed me to strap the watch to the outside of my ski jacket so that I could check my progress without exposing my skin to the elements.

The fenix 3 is packed with sensors for GPS and GLONASS (Russia's global positioning system), as well as an altimeter, a barometer and a compass. It can track a wide range of activities, including running, cycling, skiing (both downhill and cross-country), hiking, swimming, golfing and paddling.

For this review, I used the fenix 3 while downhill skiing, taking it to several mountains both in the eastern and western U.S. In all cases, the fenix 3 quickly picked up a GPS signal — usually within a minute — even when it was overcast or snowing. The watch also accurately tracked where I went on the mountain, even when I wasn't on a marked trail.

So, I had to go to the Garmin Connect website to see where I'd skied, golfed, etc. It was a little disappointing.

Garmin's website could also use some work. Although I chose the "ski/snowboard" option on the watch, my runs showed up as "uncategorized" on the Garmin Connect website. Still, the watch was smart enough to distinguish between the time I was actually skiing and the time I spent on the lift. On the site, I could see the results from each run, including how much time I was moving, elevation loss and average speed.

Another feature the fenix 3 includes is a GPS Track Log, which lets you leave digital breadcrumbs. That way, if you get lost in the woods, you can find your way back to civilization.

The fenix 3 also shows notifications from your smartphone. However, although you can read alerts, you cannot respond to them from the watch itself.

Prior to reviewing the fenix 3, I had linked my Garmin account to MapMyRun, and discovered that my ski runs showed up on the latter site as a general activity, which leads to some wonky stats — for example, it'll look like you were running at 20 mph.

As with some of Garmin's other high-end GPS watches, the fenix 3 supports Connect IQ, which lets you install apps on the watch. To do this, you have to connect the watch to your computer and sync it with the Garmin Express desktop app. From there, you can open the Connect IQ store and download apps to the watch.

Both the app store and the Garmin Express desktop app are a bit slow to load, but they're easy to use.

Several hundred apps (by Garmin and third parties) are available. They include everything from whimsical watch faces to GPS locators, weather apps and even apps that tell you when the sun rises and sets.

If the $599 fenix 3 Sapphire is too rich for your blood, consider the $499 fenix 3, which has a stainless-steel body and a rubber strap.

The $599 Garmin fenix 3 HR has the same body as the fenix 3 Sapphire but also includes an optical heart rate monitor and a rubber strap. This model can also measure your VO2 Max, an estimate of the amount of oxygen your body can process per minute.

The fenix 3's battery lasts up to 50 hours in UltraTrac battery saver mode, up to 20 hours in GPS mode and up to three weeks in smartwatch mode (GPS turned off), according to Garmin.

I took the fenix 3 skiing over several weekends and was able to get around 15 or so hours out of the watch using active GPS before it needed to be charged. Even in subzero temperatures, the fenix 3 never faltered. I wore it over an extremely cold weekend skiing in Sunday River, Maine, where the wind chill was minus 34 degrees Fahrenheit. Whereas the batteries in my other electronics, such as my phone and Oakley Airwave goggles, quickly succumbed to the frigid temperatures, the fenix 3 kept on going with no ill effects.

I like that although the fenix 3 uses a proprietary USB cable, it takes up minimal space and locks securely onto the watch.

I once got lost skiing in the middle of the French Alps. It wasn't fun. I eventually found my way out (thanks to the ski patrol). But had I worn a GPS watch that could have led me back to where I started, I would have been spared a few hours of anxiety. Of course, the Garmin fenix 3 Sapphire offers a lot more than just letting you know where you are. For those who want to collect as much data about their outdoor activities as possible, it's a valuable tool.