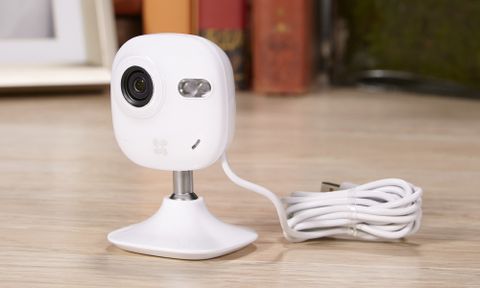 The EZVIZ Mini is easy to set up and attractively priced. But it has limited features, confusing interfaces and a poor build quality.

Everything about the EZVIZ Mini is tiny. We can imagine it being easily hidden in plain sight, should you not want to have people know that you've placed a monitoring webcam in your home or office. It's easy to use and, at $90, inexpensive, but it suffers from a cheap-feeling build, inconsistent software and bugs that plagued two different review units.

If you're only trying to capture or share video feeds, the EZVIZ Mini does a decent job. We're just not sure it would be reliable enough to use as a security camera.

Measuring only 3.5 inches tall, the glossy white EZVIZ Mini is the tiniest webcam-based security camera we've recently reviewed, and the simplest. It looks like a giant Chiclet on a stick.

The 115-degree lens sits off-center on the front of the 2 x 2-inch rounded-corner square camera, next to two infrared LEDs. A blue status light in the lower right blinks when the camera is connected, and a tiny microphone is barely visible in the lower left corner.

The head sits on a 0.5-inch leg that connects to the 2 x 2-inch square base via a ball bearing, and the camera pivots forward and backward about 100 degrees. The head can rotate and pivot in all directions. The base is magnetic and comes with a small metal plate (and two screws) for wall mounting. On the camera's side are a microSD card slot and a reset button. The cover of the card slot felt flimsy; the card sits deep in the slot, making it difficult to insert or remove. When we used the reset button, it sank into the body of the camera and became difficult to press again.

The short (5-foot) power cord is fixed to the camera head and ends in a USB/AC adapter plug, so that the camera can be powered by a computer or an AC electrical outlet. The slim USB/AC adapter won't block adjacent outlets.

The EZVIZ mobile app (for Android and iOS) is minimal and clean, but its features are limited and its icons not always self-explanatory. The main screen shows previews of the recent feeds from each connected EZVIZ camera, but on our Nexus Android tablet, the preview was scrunched and distorted.

A pale gray stylized arrowhead above each preview image gives you that camera's settings. Navigation icons stand for Home, Messages and More, which leads to My Album (snapshots and videos created from Live View), Account Management, Function Settings, Feedback and About. Function Settings were limited in the iOS app, but inexplicably much more varied in the Android version.

Each preview image opens a multiple view of up to four Live feeds. The tiny unlabeled icons on the grid of Live feeds were hard to distinguish on our Android tablet, and only marginally clearer on the iPhone. We had to use a magnifying glass.

The Live View screen has three circled icons: to record a video, to take a snapshot of the Live feed or to switch among Basic (512x288), Standard (768x432) and Hi Def (1280x720) resolutions. Since the camera's optical resolution is 720p, the latter two options are for interpolated image data.

The ezvizlife.com web portal (for Microsoft Internet Explorer or Apple Safari only) has a much better design than the mobile app, with a navigation bar on every screen and larger, labeled icons. Its home page features a sizable preview image from each camera and links to My Video, My Album, Messages, Cloud Images and Sharing Invitations.

The large Play button in each preview image leads to the convenient and intelligent Live/Playback page. Initially, that page shows the live feed from a single camera, but a large orange button switches to a multiscreen displaying feeds from up to four cameras. A zoom tool draws rectangles in the image to enlarge a specific area, but the zoom tool doesn't work in captured videos.

The EZVIZ Mini's daylight videos were generally well exposed, if a bit over-contrasted, in the mobile apps. But on the web portal, videos were dark and underexposed, even when shot in good light. The two EZVIZ Mini units we tested gave us very different experiences with night mode. With the first, we saw significant blue glare in the highlights. But the second camera produced a nice, clear grayscale infrared image.

The low 720p resolution of the 1/3-inch progressive scan CMOS sensor doesn't capture much detail, which is noticeable when you zoom in for a closer look. It can produce soft, sometimes noisy pictures, especially in night mode.

The sound on captured video is soft and breaks up from time to time, but audio captured near the camera sounded distinct (though not loud). When we listened remotely, words were understandable only when a person spoke directly in front of the camera. The EZVIZ has no two-way audio/ intercom function, a feature that is becoming common on webcam-based security cameras.

The EZVIZ Mini has no motion-area definition or sound detection. But to activate Motion Detection, flick on Push Notifications in the web portal, or Alarm Notification in the mobile apps.  Scheduling is flexible and easy, with up to four different time periods for each day of the week. You can duplicate a time slot on any other day, even with completely different start and end times.

Initially, we received only a few EZVIZ notifications over several days, all on our iPhone 6s. After installing a replacement EZVIZ Mini, we got regular iPhone notifications, but still none on our Nexus 7 Android tablet. EZVIZ representatives told us they'd never seen that before, but admitted they hadn't tested the app on a Nexus 7. Several hours later, Push Notifications began appearing on our Android tablet.

Nevertheless, cloud storage isn't necessary to use the EZVIZ Mini. You can save everything to the microSD card, and you'll still get push notifications. However, if your camera is stolen by a burglar, the footage goes with it.

We had difficulty activating the first month's free cloud storage because the Activate button was missing from the mobile apps and web portal. EZVIZ told us work being done on the "back end" of the system might have affected our unit. (Apparently, software functionality is tied to specific devices.)

MORE: How to Turn Your Laptop Into a Home Security System

It took several days for the Activate button to appear. This and other bugs we encountered made us wonder if the EZVIZ Mini had been thoroughly tested in real-world situations before going to market.

Video clips appear in Messages and Gallery in the mobile app, and in Messages and the combined Live/Playback and Timeline page on the web portal. This redundancy creates a certain messiness, but also makes it easy to find your videos.

On the mobile app, an icon on the home page leads to Messages; the Gallery link is at the bottom of the live-feed screen. On the web portal, Messages and Gallery links are in the main navigation ribbon on every page, and the home page links directly to Cloud Images (within the Gallery). Confusingly, another main navigation link is Cloud Storage, but that's a rundown of subscription plans.

The web portal's Messages page is nicely arranged. Each message is identified by alert type – most of ours were motion-detection alarms.

EZVIZ's Sharing, activated via the web portal, controls how much someone else can see. Only registered EZVIZ users can view content. You can share Live Video, Playback and/or Alarms, and select time periods to share with a specific person. Each time period must be the same for every day of the week, but you can have different options for different cameras.

We had installation problems until we changed our iPhone's Wi-Fi frequency preferences from 5 GHz to 2.4 GHz. Then everything went smoothly as we connected the camera and mobile app through a QR-code scan.

Following installation, it's important to go to the Camera Settings screen in the mobile app and click on the Upgrade button to update the camera's firmware. (Apparently, a number of the EZVIZ Minis currently being sold need it.)

When we moved the camera from close to the Wi-Fi router to our dining room, the app found it easily, and the camera resumed broadcasting its signal correctly. Throughout the rest of our test period (more than a month) we had no reliability problems, and the EZVIZ Mini continued to work with no interruptions.

MORE: How to Use Your Android Device as a Security Camera

EZVIZ's Quick Start Guide is well written and more helpful than most, though the print is tiny — you may need a magnifying glass to read it.

At $90, the EZVIZ is the least expensive security camera we recently tested — and definitely seems that way at times. It has no sound detection and it limits your control over motion detection, and there are substantial differences among its iOS and Android apps and the web interface.

Those inconsistencies, and some apparent quality-control issues in both units we tested, make us wonder whether the EZVIZ Mini was rushed to market before it was fully ready. Given that competing IP security cameras offer more features, better thought-out software and better video and sound, we can't recommend the EZVIZ Mini at this time, even at its low price. We'd spend a bit more for the Belkin NetCom HD+ instead.