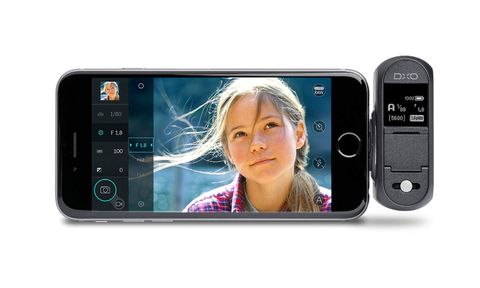 Not much larger than a Zippo lighter, the DxO One camera accessory for the iPhone takes tremendous pictures for its size.

Smartphone cameras are getting better and better, but they're still nowhere near as good as a bona fide mirrorless camera or DSLR. However, a dedicated camera is too bulky for shutterbugs looking to travel light. The DxO One is a great compromise between the two; its 1-inch sensor is much larger than that of any smartphone, yet this iPhone add-on is still small enough to slip into your pocket. Yes, it's pricey, but after taking the DxO on a few trips, I'm highly impressed by its quality and convenience.

Update (2/2019): DxO makes a version of the DxO One with a USB Type-C connector that will work with Android phones.

The DxO One is unlike any other camera before it. About the size of a wall charger for your phone, the 3.8-ounce DxO One slipped easily into my pocket, making it great for when I wanted to travel light.

The front of the camera has a lens cover that, when slid open, causes a Lightning jack to pop out the side of the camera. The connector rotates 45 degrees in each direction, so you can hold the DxO and iPhone above or below your head, and still see what's on screen. I just wish it felt more secure; I was always wary of snapping off the connector.

The top of the DxO has a fairly large shutter button, while the back has a small touch-screen OLED screen that provides info such as battery life, camera settings and shots remaining. Cleverly, the touch screen is only active when the DxO is disconnected from your iPhone. Below the screen is a small door that conceals the microSD card slot and a micro-USB port.

There's no getting around that this is a wonderfully portable camera. However, when it was connected to my iPhone, I had to be careful not to block the DxO's lens with my middle finger.

As soon as you plug the DxO into your iPhone, the DxO's app launches. The app is laid out pretty much the same way as other camera apps: The main part of the screen shows you what the camera is seeing, and along the right are settings for image quality, flash, timer and scene mode.
On the left is a thumbnail image of the last photo you took, as well as a button to switch from still to video.

In addition to Sports, Portrait, Landscape, and Night modes, the DxO offers shooting modes normally found only on DSLR and mirrorless cameras: P (Program), A (Aperture Priority), S (Shutter Priority) and M (Manual). Depending on the mode you select, controls to adjust the aperture, ISO and shutter speed will appear on the left.

It was fairly easy to adjust the manual controls using my left thumb, but it's a much slower process than having physical dials. Still, for a camera as small as this, it's not a horrible trade-off.

One thing I wish the DxO had was a more extensive Live View; the app only shows you the changes you make to the aperture (making the background blurrier) as well as exposure compensation.

You can configure the camera to save photos just to the microSD card in the camera itself (up to 128GB), or to your iPhone. I chose the former, because it freed up storage on my phone, but to transfer photos, I had to connect the camera.

After I slid the lens cover open, the DxO was ready to shoot within a second or so. I liked that, as soon as I plugged the camera into my iPhone, the DxO app automatically opened.

The DxO One's 1-inch BSI CMOS sensor produced superb images that were significantly sharper than those from the iPhone 6s. In this photo of the Austrian Alps I took on a recent vacation (tough life, I know), the distant snow-capped mountains were much crisper and defined than a similar shot taken with the iPhone. Even the contrails left by passing airplanes were sharper.

I also put the DxO up against the iPhone 6s' camera, as well as the Sony Alpha a5100, a $500 mirrorless camera with a 24.3-megapixel APS-C CMOS sensor. In a shot of the Empire State Building taken from Madison Square Park, the DxO was just as good, if not better, than the Sony at picking up details of the skyscraper. I could better make out the art deco trim, as well as all of the radio antennas on top of the building.

The DxO also captured a good amount of detail, even in the shadows. You can make out the expression on the skier hanging out underneath the Ice-Q restaurant (seen in Spectre).

I was even more impressed with the DxO's metering when taking a photo from the top of the Spanish Steps in Rome; I could see a remarkable number of colors in the tourists in the shade, even though the rest of the scene was brightly lit.

The one area where the DxO struggled was when shooting toward the sun. The lack of a lens hood resulted in a lot more lens flares than I expected.

The DxO also excels at taking pictures of very close objects, though I found that you need to be careful if you have a very narrow depth of field. In this photo of some broccoli romano, not all of the points are in focus.

In low-light conditions, the DxO managed to capture well-defined images. I was pleased with the evenness of the lighting, as well as the details in a picture of a woman with the New York skyline in the background.

The DxO was generally quick to focus, usually taking about a second to do so. But occasionally, it was confused, especially in darker situations. You can also tap on any part of your iPhone's screen to have the DxO focus on that point. While not a speed demon, the DxO was ready to shoot about half a second after taking a photo. You'll get a faster response from a camera such as the Sony A5100, but then again, the DxO isn't meant for sports photography.

Although it shoots video at a max of only 1080p and 30 frames per second, the DxO performed well here, too. A video I shot of a rainy Bryant Park was detailed and in focus. Colors were well saturated, with the exception of yellow daffodils, which looked blown out.

However, while filming, the video feed from the DxO to my iPhone was jittery, especially as I panned around. Most likely, I was stretching the processing power of the DxO to its limit.

A neat trick with the DxO is that you can use it even when it's disconnected from your iPhone, making it fantastic for impromptu and surreptitious shots. In this mode, the DxO's display turns into a touch screen, and lets you swipe between camera and video modes. Even more clever is a live preview mode; while the DxO's miniscule screen shows only a very pixelated black-and-white image, it helps give you some sense of what you're aiming the camera at.

DxO estimates that the One's battery will last through about 200 photos — a claim I found to be fairly accurate. To conserve battery life, the DxO goes into power-saving mode after 50 seconds of inactivity. After 2 minutes of inactivity, the camera turns off.

No matter how good it is, every third-party iPhone lens faces the same reality: It just doesn't take images as good as the ones from a real camera. The DxO One is the perfect compromise for people who want to get better pictures but don't want to be weighed down by a lot of gear. The DxO One not only lets you shoot excellent images but also gives you full manual control. At less than $200, it's one of the more expensive iPhone accessories, but one of the best, too.