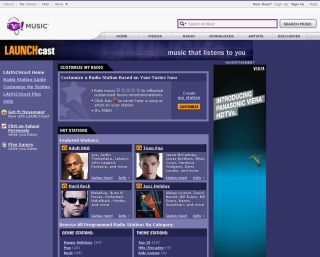 A new CBS Radio player will be integrated into the Yahoo Music site that will make LaunchCast available to Macintosh, Firefox, and Safari users for the first time. The new CBS Radio player will also be incorporated into Yahoo’s News and Sports pages to deliver content from a range of sports-, news-, and talk-radio stations, including New York’s WFAN and Los Angeles’ KNX-AM. CBS Radio will assume responsibility for selling ads on the combined portfolio.

"CBS Radio has clearly demonstrated its commitment to streaming media, one of the hottest spaces on the web,” said David Goodman, president of CBS Radio’s Digital Media and Integrated Marketing. “This announcement along with our relationship with Last.fm, and other distribution partnerships, reinforces our Company’s position as the Number one Internet radio company in the world."

In addition to operating 140 terrestrial radio stations, CBS Radio has an agreement with AOL to power AOL Radio. Parent company CBS Corporation has been seeking for the past several years to attract a younger audience online, perhaps in an effort to offset the older audience that watches its television programming. According to Adweek, the average age of a CBS online viewer is 36, while the average age of its TV viewer is 53. The company spent $280 million in 2007 to acquire the London-based Last.fm music-recommendation engine.

Yahoo, struggling to regain its mojo, recently shuttered its Yahoo Music Unlimited subscription service. The company turned those subscribers over to Rhapsody, but retained the free LaunchCast Internet radio service and subscription-based LaunchCast Plus services.