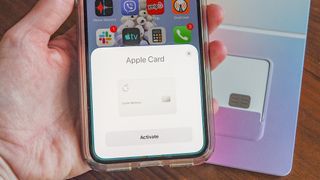 The Apple Card is Apple’s way of trying to upset the credit-card establishment, with no hidden fees and perks like Daily Cash back. However, a bunch of Apple Card users are upset by possible discrimination against female applicants.

Programmer David Heinemeier Hansson took to Twitter on November 7 to complain about what he saw was discrimination within the application process for Apple Card, citing the disparity between the "credit limits" offered to him and his wife, and complaining that this decision could not be appealed. (Presumably, Heinemeier Hansson is referring to the spending limits on each individual card.)

The @AppleCard is such a fucking sexist program. My wife and I filed joint tax returns, live in a community-property state, and have been married for a long time. Yet Apple’s black box algorithm thinks I deserve 20x the credit limit she does. No appeals work.November 7, 2019

The day after this thread was posted, Heinemeir Hansson’s wife was given the same spending limit after discussions with several Apple representatives, and the discovery that her credit score was in fact higher than his. (He said and his wife bought their credit scores from TransUnion, but that score is based on the VantageScore algorithm and may give results that are different from the FICO credit score that most lenders use.)

While pleased with the outcome, Heinemeir Hansson still questioned the integrity of the algorithm that had decided his wife’s initial spending limit, and why the people they had spoken to were so confident in its accuracy despite having no way of examining it.

Steve Wozniak, the co-founder of Apple and co-designer of the original Apple computer with Steve Jobs, also tweeted about this subject, saying he and his partner had experienced the same problem.

Today, the New York Times reported that the New York State Department of Financial Services would be investigating if the algorithm governing credit-limit decisions was indeed discriminatory against women or any other protected class.

The NYSDFS’s superintendent, Linda A. Lacewell, wrote in a Medium post explaining that the decision that the investigation was based on Heinemeier Hansson's and others’ complaints. She invited others who believe they have been affected by similar circumstances to contact the department with their experiences.

Bias, even when unintentional, against protected groups is against the law, so if the NYDFS finds evidence that back up Heinemeir Hansson’s accusations, then this will be a big deal for both Apple and Goldman Sachs, who along with Mastercard are responsible for running Apple Card.

While algorithms like the one governing the Apple Card application process can’t themselves be discriminatory, at least in theory, the process of programming and the data used to train the algorithms can introduce bias into supposedly objective pieces of software, which can then be overlooked.

Goldman Sachs responded to this news with the statement below, saying that because each application is treated individually, it’s entirely possible for two people in the same family to end up with very different spending limits.

We wanted to address some recent questions regarding the #AppleCard credit decision process. pic.twitter.com/TNZJTUZv36November 11, 2019

To add some context, it is possible for Heinemeir Hansson’s wife to have a higher credit score than he does, yet receive a lower spending limit on a credit card.

A credit score predicts how likely you are to pay back a loan, but it does not by itself determine how much you would be allowed to borrow. The lender would also have to consider your individual income and how much debt you have.

Over the course of 30-odd angry tweets, Heinemeir Hansson never mentions how much money he makes or how much money his wife makes. That's none of our business, but it is now Apple's business. If one spouse's annual income was seven figures and the other's was five figures, they would likely end up with very different credit-card spending limits.

Apple Card is certainly a unique new direction for Apple to take, but as with many fresh ideas, there are teething problems.

We’ve already written about how it can be tricky to use Apple Card overseas, and sometimes fails to work within Apple’s own stores, but this alleged problem would be of a far greater magnitude if it can be proven.

That will likely take some time, however, as New York State’s investigators will need to gather evidence and thoroughly examine it.