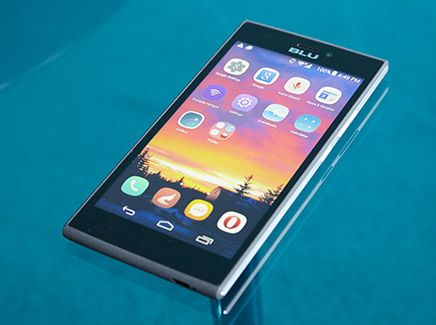 The Blu Life One is an affordable unlocked smartphone with a very light and sleek design, a 13-megapxiel camera and dual-SIM support, but it's a bit sluggish.

If you're not a fan of contracts and would prefer to buy your phone first and pick your carrier second, the Blu Life One is a tempting bargain. Available for $179 unlocked, this Android handset features a 5-inch IPS display, a 13-megapixel camera and dual-SIM support. You can use this phone on such GSM networks as AT&T, T-Mobile, Cricket and MetroPCS and enjoy LTE speeds. The Life One packs a lot of value in a sophisticated package, but we have some reservations about its  performance, which we consider subpar in some aspects.

The Blu Life One could hold its own in a beauty pageant with the top-tier smartphones. Its rectangular body is slim, and I loved the back's unique texture when I picked up the handset. Blu calls it a Sandstone Grey finish, and it truly does look and feel like a smooth stone. It’s a welcome change from the typical slippery, shiny smartphone back. My review unit came in grayish black, but you can get the back in white or gold.

The sides use a brushed silver metal housing, which makes for a rigid construction, while the 5-inch display is covered in Gorilla Glass 3 with a black bezel on the top and bottom.

Under the back cover of the Life One are two microSIM slots, convenient for those who travel abroad often, or for those who want the same phone for work and personal use. One of the slots in the Life One can support nanoSIM cards as well, but you'll need a microSIM adapter.

The Blu Life One's 5-inch, 1280 x 720 IPS display delivered bold colors and crisp details when I watched YouTube videos in bed. In the trailer for "Inside Out," I could see all the tiny peach-fuzz hairs over Anger's body.

The display is very bright, notching an average of 525 nits based on our readings. That's better than the smartphone category average (388 nits) and it beats both the Moto G (463 nits) and the Nuu X1 (314 nits).

The Blu Life One is powered by a 1.2-GHz quad-core Qualcomm Snapdragon 410 processor and 1GB of RAM, with just 8GB of internal memory (expandable with a microSD card slot up to 64GB). While the phone could handle 10 apps open at once, there was about 3 seconds of lag before apps fully opened and loaded.

The Life One delivered benchmark scores that were similar to other budget phones on some tests, but it was slower on others. On the Geekbench 3 test, which measures overall performance, the Life One notched 1,449. That's better than the Nuu X1 (1,108, with a 1.2-GHz quad-core Snapdragon 400 CPU), but it falls short of the Moto G (1,591, with a 1.4-GHz quad-core Snapdragon 410 CPU) and the smartphone category average (2,511) by a long shot.

You'll definitely want to invest in a microSD card if you opt for the Life One. Only 4.45GB of storage is available out of the box, which doesn't leave you much room for photos and apps.

Running Android 4.4 KitKat, the Blu Life One has a subtle skin over Google's operating system that makes all the icons' rounded squares look like bubbles.

Aside from the typical suite of Google apps, including Gmail, Chrome, Maps and YouTube, Blu added some of its own software. The default dock has a shortcut icon for the browser Opera, and you'll find programs like File Manager, FM Radio, Sound Recorder and Downloads. One of the more helpful programs is SIM Toolkit, which lets you set up and configure the SIM cards you have inside the Life One.

The Life One's 13-MP rear camera took lovely photos on a summer's day in New York City. The colors of the flora in Madison Square Park were rich and bright, but overall there was a lack of crispness around the edges of the plants. I got the best results when I manually tapped the screen to focus, and it never took more than a second for the camera to capture and save the photo.

The camera's lack of detail carried over in low-light situations. You will want to keep the flash in those scenarios as well, since the camera on its own produced images that were too dark otherwise.

Videos, by contrast, were super-sharp, zeroing in on the details of passing taxis and trucks, as well as individual leaves on trees.

The 5-MP front camera took nice-looking selfies, rendering the baby pinks of my shirt accurately yet softly, and even capturing the faint hint of lipstick left on my mouth.

To really bump up your selfie game, you can use the Face Beauty shooting feature on the Life One’s camera, which is similar to Live Makeup mode in the HTC Desire Eye. Selfies taken in this mode narrowed my face slightly, making my cheekbones more prominent, and enlarged my eyes. The differences were very noticeable when placed side-by-side with a regular selfie - the worst part of that mode is that it made my skin look a tinge too gray for my liking.

The Life One's 2420 mAh battery lasted 7 hours and 49 minutes on our battery test, which involves continuous Web surfing over Wi-Fi at 150 nits of screen brightness. While that's not as good as the smartphone category average (8:28) or the Moto G (9:00), it will serve you better than the Nuu X1 (5:12).

The Blu Life One is a cheap unlocked phone that doesn't look the part. I really like the sophisticated design, bright and bold display, and capable camera. While its performance leaves something to be desired - and you'll likely need to invest in a microSD card - this handset is faster than the Nuu X1 and is $20 cheaper. In this price range, the Moto G is the fastest and longest-lasting of the bunch, but the Blu Life One is an affordable option not to be overlooked.

Valentina Palladino is a senior writer at Tom’s Guide. When she’s not writing about technology, she’s probably at a concert, or shopping at a beauty supply store. Follow her on Twitter at@valentinalucia.