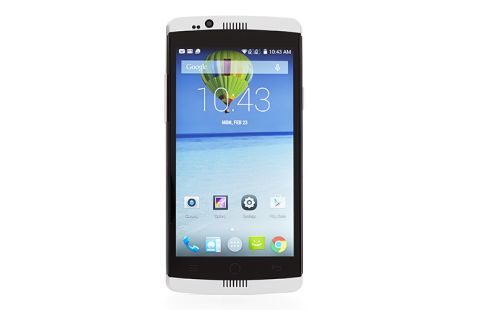 The Nuu X1 is an affordable unlocked Android smartphone with a sharp camera, but its overall performance and battery life don't measure up.

Unlocked phones are all the rage lately, thanks to aggressive pricing and tempting no-contract plans. Nuu's X1 is an LTE smartphone that costs $200 unlocked and features a 5-inch display, stock Android (albeit the older KitKat) and NFC support. But that's where the fun stops and the "meh" begins. With an unexciting design, short battery life and underwhelming performance, the X1 isn't a good deal.

At first glance, you might mistake the Nuu X1 for the handsome HTC One, but you'll know the X1 is a phone of a different breed when you touch it. While it has the same curved top and bottom edges around a black, rectangular panel as you'll find on the One, the Nuu's white-plastic body makes it look and feel bland.

On its white-plastic back sits a 13-megapixel camera and an LED flash at the top, with the Nuu logo stamped on the bottom. A groove on the bottom left lets you pop open the back cover to access the micro SIM, SIM and microSD card slots, as well as the removable battery.

The top edge of the phone houses its micro USB port and headphone jack, while a volume rocker and power button sit on the left and right sides, respectively.

Under the rear cover sit two SIM slots — one for micro SIM and one for regular SIM. The cards support LTE and 2G separately, so you'll need both cards for calls, text and data. The slots are numbered; SIM 1 (micro SIM) is for LTE, and SIM 2 (regular SIM) is for 2G.

The Nuu X1's display didn't fare as well as its competitors on various screen benchmarks, but I still enjoyed watching a 1080p trailer for Kingsman: The Secret Service on the X1's 5-inch, 720p touch screen. Colin Firth's lux red robe and Eggsy's gold, patterned jacket looked bright and colorful, while details such as pinstripes on Firth's suit and Samuel L. Jackson's eyebrows were clear. Viewing angles were generous, with colors staying true as I tilted the screen away from me.

Although the volume was on the quiet side, I was impressed with the X1's speakers, which delivered crisp sound. Taylor Swift's voice rang out clearly against the background instruments when I played "Style", while Ellie Goulding's haunting voice was distinct in "Love Me Like You Do."

Powered by a 1.2-GHz quad-core Snapdragon 400 CPU with 1GB of RAM and 16GB of ROM, the X1 delivered mostly smooth performance. I played a few rounds of Spider-Man Unlimited without significant lag, while apps such as Gallery and Play Store, and a video in Chrome ran in the background. While going back and forth between apps and the home screen felt zippy, the camera was often slow to start and snap a shot.

The X1's 13-megapixel Sony camera snapped sharp, colorful pictures. My shots of Main Street buildings and parade floats in Disney World were vibrant and clear, as I could make out individual light bulbs on a store sign. Red flowers and buildings looked true. The camera had trouble dealing with bright light, though — some building edges were overexposed and lost in the sky.

My full-HD recording of the Disney parade looked smooth and had similarly vibrant colors and clear detail.

Up front, the 5-MP wide-angle camera performed inconsistently. Selfies were frequently blurry and often over- or underexposed. Even in a well-lit, nonshaky situation, they turned out somewhat dull. My brown hair was accurately captured, but my white top appeared gray.

It's hard to get excited about Nuu's X1. Sure, you get an unlocked LTE Android phone with a very capable 13-MP camera for an affordable $200. But otherwise, it's an underwhelming 5-inch Android handset with middling performance and short battery life. Even the supposedly cool dual-SIM feature works only in a limited manner. The older version of Android doesn't help, either.

We recommend the OnePlus One instead. For just $100 more, you get a sharper display, more powerful performance and a super-long-lasting battery. It also runs CyanogenMod, which is a more open version of Android that offers better security and customization options. Shoppers on a budget will prefer the Moto E (second generation), which has a smaller display but zippier performance and longer endurance, for $100 less.

Cherlynn Low is a Staff Writer at Tom's Guide. When she's not writing about wearables, cameras and smartphones, she's devouring old episodes of Torchwood or The X-Files. Or taking selfies. Follow Cherlynn @cherlynnlow . Follow Tom's Guide at @tomsguide and on Facebook.