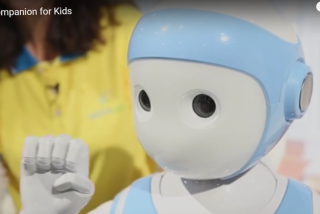 Kids could be clamoring for an iPal social robot later this year, which promises to become a friend and educator for less than $2,000, a price that may actually be considered reasonable for the kind of technology that it uses.

The iPal is equipped with 15 sensors that, for instance, can identify motion and recognize objects, people, voices and facial expressions.

And since it's Android-based, it could be relatively easy for app developers to cater to iPal's users vs. users of robots with proprietary operating systems, said Madeline Duva, advisor to the robot's maker, AvatarMind in an interview with Tom's Guide.

Before the iPal can make it to homes, AvatarMind will be spending the first half of this year working with app developers on kids content that's compatible with the robot, Duva said.

The iPal can also be used to help care for the elderly, serving as a companion that can carry on conversations and monitor those who aren't as mobile as they used to be.

The iPal can also make sure that its users stay safe, Duva said. But don't be lulled into a false sense of security. Social robots aren't meant to replace common-sense safety measures that humans should be there to exercise around kids, like making sure young ones don't choke on small parts from toys that they put in their mouths.