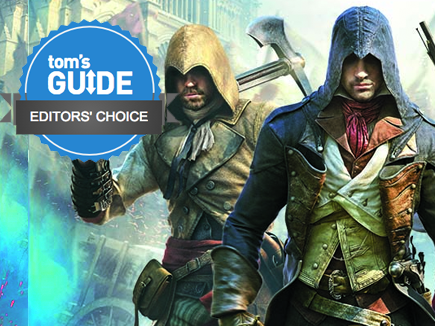 Assassin's Creed Unity refines the franchise's gameplay and graphics with next-gen tech, and the results are understandably excellent.

Assassin's Creed Unity ($60; PlayStation 4 and Xbox One; PS4 version reviewed) is one of the most anticipated games of 2014, and with good reason. The Assassin's Creed series has always delivered superb stealth/action gameplay, impeccably researched narratives and incredibly realistic depictions of historical cities. Moving the action to Paris during the French Revolution and leveraging the power of current-gen consoles to refine gameplay and graphics seemed like a smart move, and the results are understandably excellent.

Editor's Note: Although I encountered relatively few bugs when I played Assassin’s Creed Unity pre-launch offline on the PS4, many other reviewers and players have encountered crippling flaws in Assassin's Creed Unity that range from annoying to game-breaking, especially on the PC version.

Tom's Guide is currently in the process of examining Assassin's Creed Unity on both the PC and the Xbox One to see how it measures up. We are not altering the rating at present, but we reserve the right to change it.

You could play Unity for the excellent story, the tight gameplay or the gorgeous visuals, but in all likelihood, what you'll remember most is the city itself. Paris doesn't just feel accurate; it feels alive. Like Ernest Hemingway's Parisian memoir A Moveable Feast, this is an experience that will stay with you for a long time to come.

Gameplay: The Art of Running Away

Arno Victor Dorian, a young French nobleman in 1790's Paris, is the latest hero to don the Assassin's cowl. You'll guide him across the rooftops of Notre Dame, through the skull-bedecked Catacombs and into the angry populist mobs outside the Palais de Justice. The free-running parkour, demanding stealth and counterattack-based combat from past series games are present and accounted for here, but in very refined forms.

Since I spent most of my time in the game scaling buildings and navigating crowds, I was very pleased to find that the free-running controls had incorporated a few new tricks since last year's Assassin's Creed IV: Black Flag. Climbing the edifice of Saint-Étienne-du-Mont or sprinting after a thief along the banks of the Seine requires only a few simple button combinations. Better still is that Unity implements a much-needed "free-run down" option, which helps you descend buildings in a jiffy or dash through crowds without mounting the nearest windowsill.

In a first for the series, Arno can also enter buildings not related to the plot. This adds some color to the world, but also makes it obvious that the platforming controls still need a little more refinement; trying to enter a window, especially while being pursued by King Louis XVI's finest, is usually a great way to get perforated with flintlock bullets.

The combat system has also undergone a much-needed upgrade. Rather than politely waiting their turn for the protagonist to impale them, as they had in past games, enemies in Unity will pile on Arno with swords, axes and guns, necessitating precise counterattacks and cunning dodges.

This means that even great combatants will want to avoid out-and-out brawls whenever possible and instead make use of Arno's arsenal of hidden blades, wrist-mounted crossbows, smoke bombs, pistols and more to confuse and eliminate enemies outside of combat. After all, the name of the game is Assassin's Creed, not Extremely Visible Target's Creed.

Arno also has access to an improved stealth system, including the ability to leave a "shadow" for enemies to investigate when he breaks their line of sight, and sneaking while in a crouch to reduce the amount of noise he makes. Infiltrating a location quietly is still usually the best approach, although enemies can be surprisingly oblivious when their compatriots succumb to a hidden blade right behind them in brightly lit rooms.

The gameplay upgrades in Unity are subtle, and Ubisoft probably could have gone further. The combat is still not up to par with similar titles such as Shadow of Mordor, and the platforming gets sticky at times. Still, the changes are welcome ones in a series whose fundamentals have not changed since 2007.

Plot Missions, Paris Stories and Murder Mysteries: Too Much content?

The moment-to-moment gameplay in Unity is all well and good, but the game's main draw is the staggering amount of content it offers. During the course of the game, Arno explores Revolution-era Paris in its entirety, as well as nearby Versailles, seat of the royal court. There are even a few other epochs to explore, although to say more would be telling too much.

Take a look at the city map, and you'll see that it's absolutely choc-a-bloc with stuff. There are chests to loot, scenic viewpoints to climb and cockades to collect (a "cockade" is a decorative ribbon; I had to look it up, too). More important, though, there are missions to complete — and there are a ton of them.

Missions come in a few flavors, but the ones you'll get to know the best are plot missions, Paris Stories and Murder Mysteries. Plot missions are self-explanatory, and there's plenty of variety across the game's 12 chapters. The assassinations that cap off each chapter are particularly delightful, as there are a lot of ways to take out your target, from specialized environmental kills, to a stealthy blade in the dark, to a good, old-fashioned pistol shot, to a sword applied directly to the vitals.

Paris Stories are the catch-all side quests that task Arno with everything from retrieving stolen artifacts to crossing swords with expert duelists. They're all diverting, although they're mostly just there to pass the time and fill your coffers.

The Murder Mysteries are the standout, and possibly my favorite part of the entire game. Every now and then, you'll come across a dead body surrounded by only a few clues and a miasma of mysterious circumstances. From there, Arno becomes an Early Modern Francophone Batman, following leads, interrogating suspects and ultimately putting the murderer behind bars. These missions will often take you all across Paris, crossing swords with evildoers and using your brain to put clues together. Each mission highlights the best of what Unity has to offer.

Add a deep-item customization system (money buys gear, Sync Points from plot and cooperative missions buy character upgrades, and Assassin points, which reward stealthy or stylish behavior, buy equipment upgrades) and it's possible that Unity is packed with too much content.

This may seem like a nitpick, but opening the map reveals a visual cacophony of arcane symbols, so crowded that seeing where you need to go next is impossible. (You can apply filters, but that doesn't solve the underlying issue.) Add the inevitable glitches that crop up (such as mission objectives malfunctioning or even disappearing entirely, which happened to me multiple times), and it can turn anything that doesn't involve the main plot into a confusing ordeal.

Multiplayer is nothing new for the Assassin's Creed series, but it's always been competitive. Unity introduces something new by letting players team up to tackle cooperative missions and rewarding them with gear, Sync Points and money.

Since multiplayer servers were not active at the time I wrote the main review, I’ve written a separate piece weighing its strengths and weaknesses. The cooperative multiplayer can be fun with friends, but does not affect the overall experience of the game should you choose to eschew it.

While the American Revolution rages overseas, young Arno Victor Dorian in Versailles befriends the beautiful Élise de la Serre and loses his father to a murderer's blade in the same day. In 1789, when Élise's own father suffers a similar tragedy, Arno investigates and learns two uncomfortable truths: Élise and her father are part of the nefarious Templar order, and Arno's own father was an Assassin, fated to oppose them.

Arno embraces his Assassin heritage, and the hunt for M. de la Serre's murderer begins just as the French populace enters a period of civil unrest. With a revolution brewing and dissension in the Templar ranks, Arno must discover what happened to M. de la Serre, how he can salvage his relationship with Élise, and why his own father was fated to die.

As far as murder mystery stories go, Assassin's Creed Unity is a good one, complete with steady pacing, strong writing and memorable characters. My only real qualm is that it's been done before. Arno's quest in Unity is extremely similar to Ezio Auditore da Firenze's in Assassin's Creed II, right down to the murdered Assassin father and Templars taking advantage of social upheaval to ascend to positions of power.

This time around, you'll meet the Marquis de Sade instead of Leonardo da Vinci. I won't say whether that's better or worse, but da Vinci never had a very amusing cutscene with a goat, so take that for what it's worth.

Assassin's Creed Unity is not available on last-gen consoles, and even a casual stroll through the City of Lights reveals why. The streets of Paris positively teem with citizens. At the gates of the Palais de Justice or Notre Dame, you might encounter hundreds of people massing about the entrances, some of whom are wielding torches, burning effigies or attempting to engage in pickpocketing.

The actual art design and graphics don't vary too much from last year's Black Flag, particularly if you played that game on a current-gen system. Faces are sharper, backgrounds are clearer and textures are more detailed, but the main difference between Black Flag and Unity is one of scale rather than fidelity.

For as long as I've reviewed video games, I have nursed a pet theory that you can always determine roughly how much a developer cared about a game by how much effort it put into the sound design. In that case, Ubisoft must have cared about Assassin's Creed Unity very much.

From the original score to the songs in the bars (including a slightly anachronistic rendition of La Marseillaise) to the voice acting, everything about Unity screams effort and attention to detail. Dan Jeannotte as Arno and Catherine Bérubé as Élise -- who both bear a remarkable resemblance to their digital counterparts -- in particular deserve shout-outs for bringing their characters to life with both conviction and nuance.

The only problem with the otherwise-excellent voice acting in Unity is that there's nary a French accent to be found. For whatever reason, just about every character has some variation on a British style of speaking. Given that previous games have attempted to emulate Syrian, Italian, Iroquois and Jamaican accents, the oversight is a strange one and feels a bit jarring.

Assassin's Creed Unity is a great game, but that's not surprising given its pedigree and how good it looked during development.  In fact, "surprising" is probably the last word I would use to describe the game. It doesn't reinvent a classic series, electing instead to elevate the gameplay, the graphics, the sound and the setting to a next-gen level.

When developers pour their hearts and souls into a project and have the necessary resources to pull it off, a game like Assassin's Creed Unity is the result. In fact, this title is perhaps the single best argument in favor of big-budget gaming today. It falls just short of perfection, but not for lack of trying.

In what's already been a banner year for open-world action games, Assassin's Creed Unity stands head-and-shoulders above the competition. If you don't have a PS4, Xbox One or gaming PC, consider getting one. That way, whatever else comes out within the next few years, you'll always have Paris.