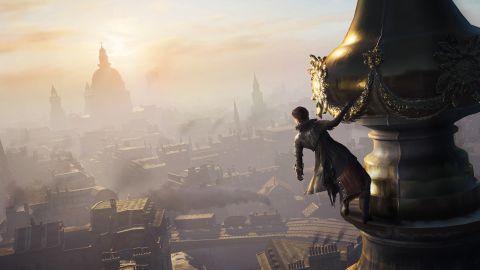 Victorian England is, paradoxically, one of the Internet's favorite subcultures, but also one of its most misunderstood. Online denizens tend to adopt an extremely romanticized view of the era, extolling the dapper lords and fetching ladies, and celebrating the advances in technology while neglecting to explore the vile racism, shameful abuse of human rights and crushing poverty endemic to the time. While Assassin's Creed Syndicate doesn't fully expose the nasty underbelly of Victorian life, it at least takes a stab at it — and provides a consistently fun game in the process, too.

After last year's problematic Assassin's Creed Unity, Ubisoft had to demonstrate that the long-running series could perform on current-generation consoles without crippling bugs, while still adding new elements to keep the series feeling fresh. The former goal has been a nearly unqualified success: Syndicate is much, much cleaner than its predecessor.

The latter goal results in more of a mixed bag. Assassin's Creed Syndicate has polished gameplay, gorgeous visuals and a big world to explore, but both the story and new elements sometimes feel like they're spinning their steam-driven wheels.

The Assassin's Creed series has taken place all around the world across almost 700 years of history, and Syndicate is the first game set in the relatively modern era. This time, the action focuses on Jacob and Evie Frye, English twins who venture to London at the height of the Industrial Revolution in order to liberate the working class from the iron fist of industrialist Crawford Starrick.

If you've played any Assassin's Creed game in the last eight years, Syndicate will feel immediately familiar. You parkour your way around tall buildings, sneak up on enemies to assassinate them silently and engage in large-scale brawls with fists, swords, guns and whatever else you have handy.

The platforming, stealth and combat haven't significantly changed since the first game, but dozens of little tweaks help the system feel somewhat fresh. You can switch between Jacob and Evie for most missions, and although their skill sets are slightly different (Jacob favors combat; Evie, stealth), you'll end up spending about half of your time as each sibling.

Take combat, for example. You'll still need to attack and counterattack your way through half a dozen foes in any given street fight, but the game now keeps track of your combos, like in the Batman: Arkham series or Middle-earth: Shadow of Mordor. You can upgrade your skills so that a higher combo means a faster dispatch, or weaken multiple enemies at once for brutal multiple takedowns. It feels a bit action-heavy for a game that (in theory) focuses on stealth, but there's no denying that combat feels faster and more fluid than before.

Stealth, too, has seen some refinements since Unity. Rather than just holding down a button to sneak, you can now enter a sneaking mode, which helps you take advantage of cover automatically. This feels much more natural than using one button for cover and one button for sneaking, and you can also upgrade your stealth skills to make less noise as you tiptoe around, land from high places or assassinate nearby foes. It's a nice touch that helps you feel more proficient over time, even if you're prone to botching stealth missions (as I am).

Exploration has arguably gotten the biggest upgrade of the three core Assassin's Creed pillars, since now you can explore London with carriages and use a rope launcher to propel yourself to the top of tall buildings almost instantly. Getting around the city with these two advancements feels much easier than before, but neither one makes travel so simple that you'll miss the beautiful scenery along the way, or get to avoid some difficult platforming sections during missions.

If there's one area where Assassin's Creed Syndicate doesn't really deliver, it is gang warfare. Ubisoft talked up this feature ever since it first announced the game, and while the end result is functional, it doesn't add that much to gameplay overall. You can recruit the disaffected proletariat of London into your gang, the Rooks, and command them to help you in combat. You can also upgrade their skills and equipment over time.

There's no real problem with the mechanic. It works exactly as advertised, and it makes perfect sense in context of the "working class uprising" story. However, it also doesn't add much to gameplay. Jacob and Evie are perfectly capable fighters on their own, and while having AI allies for some of the larger battles is helpful (and even necessary), it doesn't change the fact that you'll spend most of the game playing by yourself, focusing on Jacob and Evie rather than their temporary companions.

One advantage to gangs, though, is how most side quests in the game work. In previous installments, optional assassinations, investigations, combat missions and pickpocket assignments were mostly just for extra money and gear. This time, they're directly tied into control over each of London's neighborhoods. Complete enough missions, and you can confront the local leader in an all-out gang war. Not every side quest is directly tied to a gang mission, but it helps them feel like integral parts of the story rather than busywork.

The year is 1868, and the British Empire has never been more powerful. London is the capital not only of Britain, but arguably the entire world, and that success has bred corruption. Crawford Starrick, a powerful business magnate, is also the Grand Master of the clandestine Templar Order, and grinding mankind beneath their boot heels (for its own good, of course) is just how the Templars roll.

The Assassins, another secret society opposed to the Templars, seek to liberate London from Starrick's stranglehold. When British-Indian Assassin Henry Green writes a letter begging for help, it shows up in the form of Jacob and Evie Frye, 20-something twins who want to live up to their late father's Assassin legacy and help Green in his hour of need.

Jacob and Evie are young and inexperienced, and the situation in London is dire: profiteering, inequality and exploitation run rampant. In order to stop Starrick, they'll need to gain popular support, recruit allies from every walk of life and hone their skills to become master Assassins.

Assassin's Creed, as a franchise, usually strikes an excellent balance between telling a personal story and a larger historical one — which is why it's odd that Syndicate doesn't. Jacob and Evie don't get too much development beyond their initial characteristics (Jacob is brash and sarcastic; Evie is thoughtful and clever), and this feels disappointing after the complex arcs of Altaïr, Ezio, Connor, Edward and Arno in the previous games.

Similarly, the central story of stopping Starrick doesn't carry much weight, since Starrick is a fictional character rather than a real historical figure, unlike previous series villains Rashid ad-Din Sinan, Cesare Borgia and Laureano de Torres y Ayala. While having some control over the order of the large assassinations is fun, it also means that the story doesn't have much of a progression between the beginning and the end.

On the other hand, the setting allows for a wide variety of interactions with a stunning supporting cast that includes Charles Dickens, Charles Darwin and Alexander Graham Bell, among others. Helping Dickens with a supernatural investigation or making use of Bell's engineering expertise feels both fun and true to the personalities of these real-life characters.

Like last year's Unity, Ubisoft has proven in Syndicate that it really knows how to construct a large-scale European city with current-gen gaming technology. Each neighborhood in London, from the downtrodden Whitechapel to the upmarket Westminster, looks phenomenal. As an extra treat, since London in 1868 looked remarkably similar to how it looks now, you'll spot plenty of recognizable landmarks that look just like the real thing. (One particularly delightful mission brings you to the top of Big Ben to install a telegraph wire.)

What's really impressive, however, is the animation. In previous games, characters always looked a little stiff in combat, but now, each strike, block and counterattack feels incredibly fluid, and varies significantly by weapon. Both Jacob and Evie have unique animations that highlight the differences between them: Jacob tends to look like a brawler, whereas Evie is more agile. For the first time, combat is almost as much fun to watch as it is to play.

Assassin's Creed has never really been about hummable, memorable music (save for the tavern songs and shanties in Black Flag), but rather about background tunes that accentuate the location and the action. Syndicate takes this idea a step further by pairing musical tracks and locations. In impoverished neighborhoods, expect to hear a lot of strings and drums, while more sweeping orchestral pieces dominate the wealthy neighborhoods. It's a wonderful confluence of game mechanics and storyline.

Voice acting, too, seems up to the usual series standard, although there's no single standout performance that comes to mind. Darwin's voice sounds a little bit off, although perhaps that's just my own personal bias. I always imagined he'd have more of a gravelly voice.

In many ways, Syndicate is just another Assassin's Creed, but that seems to be the worst criticism I can level at it. The story isn't very exciting, the setting feels a little staid and the gameplay innovations are mild. At the same time, London is a big, beautiful city to explore; there are plenty of missions to undertake and the two protagonists are charming, if not terribly deep.

Longtime fans can pick this one up without any hesitation, but those who were hoping for something incredibly new and exciting can probably hold off and see what era the series tackles next.