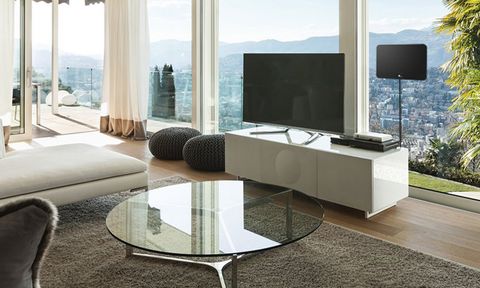 The 1byone is a well-packaged antenna with good instructions for cord cutters, but the build quality could be better.

Shoppers looking for a simple indoor, powered antenna will find that the $40 1byone amplified HDTV model (available for $30 at Amazon) comes with all the necessary components, making setup relatively straightforward. The antenna also pulls in a good number of channels, making it one of the best TV antennas we've reviewed and a solid option for cord cutters looking to save some money.

As is typical of many HD TV antenna designs, the 1byone is a flat, black, rectangular antenna (13.25 x 9.25 inches) that can be stuck on a wall or window using the two included adhesive pads. It comes with an attached, 10-foot-long coaxial cable, which should give you enough maneuvering room to set the antenna up to catch a proper signal.

There's also a 5-foot-long USB cable for connecting the 1byone  to the amplifier — and a USB power adapter, which many cheaper antennas omit. For neophytes, there's also a brief but extremely clear and helpful installation guide.

The 1byone is rated to pull in stations located within a 50-mile radius. A preliminary scan using the built-in tuner of our test Samsung KS9000 4K TV turned up 65 channels (your tuner's results may differ), but as with most antennas, not all those stations were watchable.

Most of the main network affiliates, including CBS, NBC and Fox, came in clearly at up to 1080i resolution. The notable exception was the local ABC station, which was difficult to capture in our test location in New York.

Other local broadcasts, including retro TV channels and the game-show station Buzzr, came in well enough. If you wanted to watch the likes of Bewitched or Flipper, you'd be well-served. There were also the primary Telemundo and Univision channels, which looked crisp and clear. Missing from the lineup were some Asian and Hispanic stations further up the dial, as well as oddballs like the marine weather station.

After an initial day of testing, I repositioned the antenna and was able to receive the ABC affiliate and a couple of nearby channels that the antenna originally missed. (However, this time, it registered only 61 stations in toto.)

Trying various positions, I discovered that the initial reception problems were not due to the location of the antenna; rather, the cable's fixed attach point to the antenna was loose, and jiggling it could affect reception of marginal signals. This is not, as they say, a user-serviceable part and may be an indication of some quality-assurance issues.

Ultimately, the 1byone antenna registered 61 available stations, of which it was able to capture 46 watchable channels.

After contacting the company about our test results, we received another antenna to replace the one we purchased on Amazon. The second antenna, also from Amazon, did not have a loose cable connection. However, this antenna produced different reception results, even though we used it in the same position, at the same time of day and under similar weather conditions. Retesting produced an initial scan of 53 stations (versus the other antenna's 61). The troublesome ABC affiliate came in right away this time. However, 12 of the channels produced too many dropouts, and visual distortions and were deemed unwatchable.

The differences in test results could come from a number of factors, including variances in the manufacturing process or interference from outside sources in our crowded, urban test location.

The 1byone is an inexpensive and capable antenna with all the requisite components. If you're looking in this price range, we slightly prefer the $27 Holisouse amplified antenna, which pulled in a few more channels and comes with a longer cable. But, there's a good reason the 1byone is a top Amazon seller: It performs well and doesn't cost a lot.