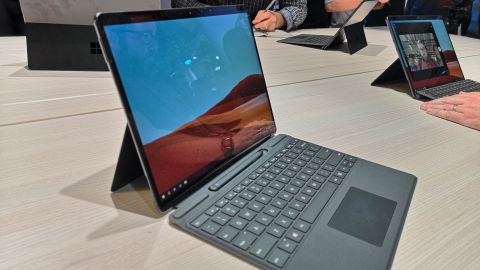 With a slick full-screen design, powerful SQ1 chip and a clever pen holster, the Surface Pro X could be a real iPad Pro killer.

Microsoft's new Surface Pro X could be the first ARM-powered 2-in-1 laptop that's worth buying. Coming in November for $999, this is also a direct competitor to the iPad Pro that steals a trick from Apple: a custom-made chip.

The Surface Pro X is unlike any device we've seen from Microsoft before. It's sleek, study, and sports seriously thin bezels. It features the expected built-in stand and a custom SQ1 CPU designed in partnership with Qualcomm. Just be prepared to spend a lot once you add the keyboard and pen.

Here are our hands-on impressions of the Surface Pro X so far.

There's a more premium config of the Surface Pro X that includes 16GB of RAM and a 512GB SSD.

The first thing you notice on the Surface Pro X is the slimmer bezels on the 13-inch edge-to-edge display. Microsoft says the bezels are 33% thinner than other Surface Pro devices. The idea is to give you a 13-inch screen experience inside a chassis normally reserved for 12-inch chassis, similar to the Dell XPS 13.

As you might expect, the Surface Pro X is skimpy on ports. There are just two USB-C ports on the left side, but that's more than the single USB-port on the iPad Pro.

The Surface Pro X has an optional Slim Pen. It's redesigned for fitting into a notch on the detachable Surface Pro X Signature Keyboard. As noted above, this bundle costs a pricey $270.

The good news is that this groove secures your pen while charging it. The pen has a flatter feel than the pen that comes with the Surface Pro 7, but I'd rather have the peace of mind that the pen is less likely to get lost.

The Surface Pro's travel-friendly design is enabled by a custom, ARM-based CPU. This is the first time Microsoft is experimenting with a Microsoft custom SQ1, 7-watt chipset.

According to Microsoft, this SQ1 chip offers three times the performance per watt than the Surface Pro 6. It boasts "all-day" battery life, faster performance, and efficient computing.

Microsoft also redesigned the GPU with Qualcomm that pushes over 2 teraflops. So this is not your typical Snapdragon-powered PC.

The Surface Pro X is fast charge capable, which means you can get up to 80 percent capacity in less than an hour.

Microsoft also promises all-day battery life, with a rated runtime of 13 hours, but we'll have to see how that shakes out in our testing.

What makes the Surface Pro X a noteworthy portable detachable is its built in LTE Advanced for connecting on-the-go. A 5G modem would make the Surface Pro X more future proof, but not having to use a phone as a hotspot is a win.

The Surface Pro X has the potential to deliver the best of all worlds. Powerful performance and long battery life in a design that's lighter and sleeker than any Surface before it. Stay tuned for our full rated review and verdict.