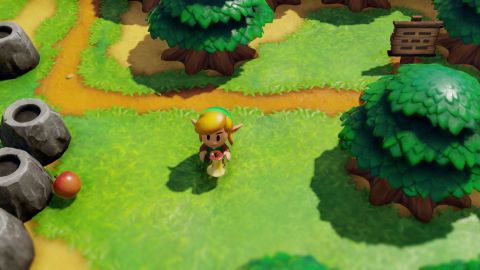 Pick up The Legend of Zelda: Link's Awakening if you have any affinity for the series and don't mind replaying a 26-year-old game. However, if you've played the Game Boy original to death, you won't find much new here.

Now, there's The Legend of Zelda: Link's Awakening, a remake of the 1993 Game Boy classic. It's hard to remember the last time a Nintendo console offered this many Zelda games — or the last time they've been so consistently good.

If you played Link's Awakening back on Game Boy, you don't need me to tell you why it's so good. The Switch remake, somewhat surprisingly, does very little to shake up the formula. It's almost exactly the same game, just in full color and with a few clever bonus features. You'll traverse the same dungeons, fight the same bosses, undertake the same complex trading minigame, and experience the same surreal story that eschews the traditional Zelda yarn for something more dreamlike and abstract.

Granted, that also means you'll be putting up with some of the same frustrations you did 26 years ago: an overworld that takes a little too long to traverse, a few opaque side quests and a general sense that the game is quite a bit smaller than most Zelda titles. The $60 asking price is also enough to give gamers pause, since the game is not terribly long, either. But these quibbles are not enough to derail a gorgeous remake of an excellent game.

For those who didn't catch Link's Awakening the first time around (or the second time — it had an expanded rerelease called Link's Awakening DX back on the Game Boy Color), the game is a very different take on the Zelda mythos. After rescuing Zelda and defeating Ganon, Link sets off on a seafaring adventure and winds up stranded on the otherworldly Koholint Island. There, he embarks on a quest to awaken a legendary creature known as the Wind Fish in order to return to Hyrule.

While the setting and story are atypical for a Zelda adventure, the gameplay is anything but. Link's Awakening takes place in a top-down perspective, like the NES and SNES Zelda titles. You'll lead Link across a varied overworld, comprising forests, deserts, mountains and all the usual biomes. Then, you'll delve into eight varied dungeons, doing battle with fearsome monsters and solving clever logic puzzles.

The formula here is pure classic Zelda. First, you'll get a quest from a townsperson who wants something from a certain location on the overworld. You'll find your way to the new location, usually solving a few terrain-based puzzles along the way.

When you accomplish your goal, you'll receive a key for a dungeon. Within the dungeon, you'll discover a new tool, such as a feather that lets you leap over small chasms or a bracelet that allows you to lift heavy objects.

You'll beat the boss and recover a legendary doodad. Then, you'll return to the overworld, where you can use your new tool to unlock a new area, and the whole process begins again. As gameplay loops go, it's both admirably simple and immensely satisfying.

What struck me about Link's Awakening is just how directed it feels after Breath of the Wild. This is both a good and bad thing.

In every dungeon, I used my one sword and one shield to take down a predetermined number of enemies. Each puzzle had one solution, and while the dungeons aren't strictly linear, you'll eventually need to visit every room and open every chest. If you see a heavy jar, you need to lift it with the Power Bracelet; if you see a long gap, you have to cross it with the Pegasus Boots and Roc's Feather.

This is all a far cry from the "go anywhere in the world, tackle any problem with an open-ended set of skills" approach from Breath of the Wild.

But solving these puzzles also made me feel very clever, especially when I'd been struggling with one for a while. Allowing only one solution generally means you'll be dealing with puzzles that are more ingenious, some of which involve finding secondary uses for your special items or defeating enemies who never turn their backs on you.

For fans who complained that Breath of the Wild didn't feel much like a traditional Zelda game, Link's Awakening offers a panacea — even if you've probably already played it.

In fact, "you've played it before" is perhaps the biggest criticism I can lob against the game.

When I saw the title's gorgeous new art style, which makes Link and friends look like adorable wooden dolls in an elaborate playset, I thought that Nintendo was going to rework the game from the bottom up. But as I played through the game, I realized that the overworld layout, dungeon maps, bosses and even script were almost exactly the same as in 1993. If you remember an obscure solution to a puzzle from back then, it probably still works.

One new feature, however, is the dungeon creator. This allows Link to progress through custom-built dungeons in order to complete specialized challenges.

After you complete the first two dungeons, you can employ series regular Dampé the gravedigger to mix and match chambers to create your very own dungeon to explore. Just building a dungeon in the first place is a pretty good puzzle, since you need to make sure that every room's exits and entrances line up, and you'll often have to work under constraints, like where you can put treasure or rooms with locked doors.

Over time, though, the dungeon creator can feel a little rote. You'll start to see the same rooms over and over, and you don't get any earthshaking rewards from it. It's a nice little bonus, but as extra feature go, the Color Dungeon from Link's Awakening DX was more substantial.

I was surprised to find that, aside from the dungeon creator, there's not really much new in Link's Awakening. It's got all the same enemies, weapons and townsfolk as before, and the story doesn't go into any more detail about Koholint Island or Link's potential paramour, Marin.

The game arguably didn't need anything drastically new or different. But it's a little disappointing to realize that you could get about 90% of the same experience by dusting off your old Game Boy cartridge.

However, I would be remiss if I didn't mention just how gorgeous the remixed soundtrack sounds. The melodies on the Game Boy version were top-notch, but the chiptune bleeps and bloops never quite captured the majesty of the tracks. Now you can hear every theme in Link's Awakening with strings, percussion, voices and more.

Whether you burned out your Game Boy's batteries with Link's Awakening back in the '90s or are just approaching the title for the first time, this is an adventure well worth experiencing.