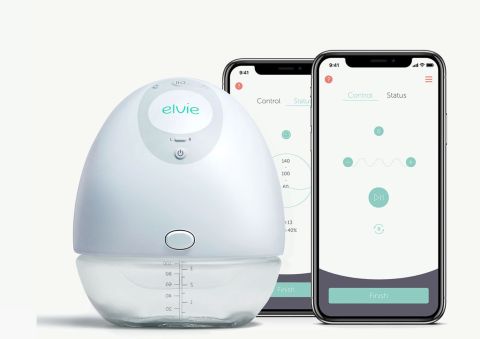 For a comfortable, hands-free experience, the Elvie Pump is hard to beat. New mothers are sure to appreciate its convenience.

When it comes to breast pumping, the most convenient method for me used to involve finagling myself into a special bra and getting stuck on the couch for a while, hooked up to various tubes and having limited range of motion for my arms. In other words, not convenient at all. But the Elvie Pump ($279 for one, $499 for a set, potentially free if covered by insurance) was able to change all that.

Elvie claims to be the breast pump that's going to pull mom out of the cupboard so she can express milk comfortably and discreetly with minimal disruption to her day. After testing the pump, I'd say Elvie has nearly nailed it.

The Elvie Pump is shaped like a breast and fits comfortably inside your bra. The pump itself has a few small buttons that are nearly flush with the outside surface, and a BPA-free plastic bottle is inserted underneath to catch milk. Four bra extenders are included, meaning you won't need a size upgrade while you're wearing the pump. However, the pumps add enough bulk to make it difficult to button certain tops, and they give a much saggier-looking appearance. Additionally, each pump has a light that is bright enough to shine through even some of my thicker tops, providing a glaring exception to the company's claim that you could lead a meeting while pumping.

While the Elvie Pump is certainly quieter than traditional pumps like the Spectra, it is not completely silent. The suction makes a low sucking noise, and eventually milk is going to start flowing. I'm not sure many women are comfortable making a sound reminiscent of giving a urine sample into a disposable cup while surrounded by colleagues.

Elvie's bottles can contain up to 5 ounces of liquid, so you can pump a nice full meal in one sitting if you're wearing one on each breast. The bottles have a horizontal shape and don't fit nipples for feeding, so you'll need to pour your milk into another bottle before serving baby.

The only drawback to Elvie's bottle shape is that it can be difficult to pour out the milk solids, which tend to stick to the surface after the milk has separated and cooled. This just means that I find myself not using these bottles for storage in the fridge, preferring instead to transfer to a typical bottle immediately after expression.

The best part about Elvie's bottle is that, unlike another popular hands-free pump, the Willow, specially shaped storage collection bags are not necessary. If you're trying to cut down on plastic waste or plan to serve the milk within a day or two of pumping, you won't need to buy anything else beyond the bottles any caregiver would already have on hand.

Cleanup is a breeze since Elvie's bottles, valves, breast shield and pump seals are all dishwasher- and microwave-safe; you can also boil them for sterilization. The pump itself is not waterproof, though it can be wiped down with a damp cloth.

Since there is no traditional machine necessary to drive suction, Elvie is more compact and lighter to transport. You won't have to buy an expensive extra bag just to carry your pump. As a working mother who commutes on a bike, I found this a huge plus; Elvie fits in my regular backpack with my lunch, shoes and a book without adding much heft.

Included with each Elvie pump are a bottle, valve, spout, seal, bottle cap and breast shield in two sizes. Extra parts are not currently available for purchase with the exception of a breast shield in an additional size. Like any other pump, the Elvie device needs to be outfitted with its accessories before use.

The pump should automatically stop pumping when the bottle is full; usually this was the case, although there have been rare instances when overflow happens. Similarly, it seems that leaning forward can make a half-empty pump think it's at capacity, which stops pumping.

There were occasions when the power turned off for no discernible reason. The bottle wasn't nearly full and the Elvie still had plenty of battery power. I found myself wanting an alert from either the device or the app when the pump stops itself; since it's hands-free and quieter than a regular pump, it could take time before I noticed that Elvie was off. This could mean significant milk lost for someone who has limited time during the day to pump.

Elvie can be used manually, but pairing it with the associated app (Android, iOS) lets you track information about your lactation, such as time pumped and amount of milk expressed from each breast. The app provides straightforward and simple instructions for pairing the device and initial connection takes only a few moments.

After first use, the app's landing page will display a button to connect to the pump over Bluetooth. There is no way to turn on the pump from the app, meaning the one time I tried to clandestinely wear it at my desk, I had to fumble at my chest to find the On button.

Once the devices are appropriately positioned and connected, you are ready to start pumping. With the pump turned on, you then activate the pump on the Controls tab. The pump will begin in let-down mode and automatically switch to expression when it recognizes milk flow. If you're using two pumps, you can designate left and right so that the app can track how much milk comes from each breast.

Switch to the Status page in the app for a real-time view of how much milk has been collected in each bottle, as well as the battery life in each pump. You have the option to set a timer for 5-minute increments up to 45 minutes. The Your Account page will let you choose whether to measure your milk in ounces or milliliters. The amount of milk shown on the app does not always properly reflect the amount in the bottle; I suspect that too much movement can have an impact on accuracy.

Each pumping session can be saved, and the app will recognize the total amount of milk collected both as a whole and from each breast. The History page in the app lists each day's pumping sessions; selecting a day from the menu will provide a breakdown of each session.

Elvie provides a truly convenient hands-free pumping experience. Unlike traditional hands-free pumps that connect to tubes and external machines, you can express without being confined to one spot.

I may not have been comfortable using Elvie at my work desk, but I have worn it while walking my dog and doing dishes, and it was incredibly handy to pump in the car when I was both painfully engorged and in a rush to get out the door. Aside from a few minor bugs that cause the device to power off prematurely or reflect an incorrect amount of milk collected, Elvie has created a superior product that any expectant mother should consider adding to her baby registry alongside baby video monitors.