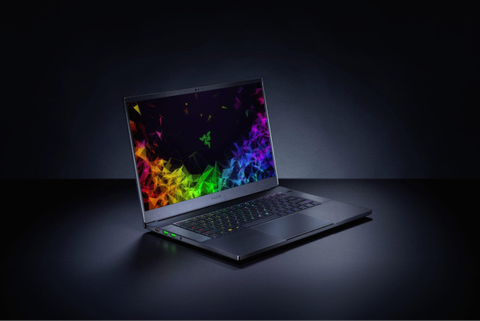 While PC gaming has traditionally been something mostly limited to desktop systems, hardware manufacturers have been working hard for years to bring laptops up to the standards set by regular PC towers. As a result, there are tons of amazing gaming laptops on the market and choosing one will allow players to take their high-quality gaming experiences with them on the go. Due to their awesome value, gaming laptops, specifically those powered by NVIDIA GPUs, have become popular in demand – and there’s no time of year when that’s truer than during the holiday season, as folks are looking to surprise loved ones with gifts or save plenty of money on [great deals]( https://www.nvidia.com/en-us/geforce/campaigns/holiday-deals/). Here’s our round-up of all the best GeForce RTX and GTX gaming laptops this holiday season. No matter what price point suits your budget, there’s a GeForce gaming laptop for you.

Laptops fitted with NVIDIA’s cutting-edge RTX GPUs have the ability to support real-time ray tracing, bringing stunning lighting effects to games that use the feature. They also make using Deep Learning Super Sampling (DLSS), a unique AI-based anti-aliasing technology, possible as well, which will improve performance at higher settings. RTX cards are also the most powerful graphics cards NVIDIA puts out in terms of raw power, too, meaning that for the best possible gaming performance, you’ll want to go with a laptop powered by RTX. Though laptops prevent significant thermal challenges by their nature, NVIDIA has managed to make these Max-Q GPUs efficient, making for a quieter experience, which is something every gamer will love. This is impressive, especially when you consider how thin and light these laptops are too.

Featuring up to a stunning 15.6-inch 4K 60Hz OLED Touch display, up to a beefy RTX 2080 Max-Q GPU, a 9th Gen Intel Core i7 9750H processor, 16GB of RAM, and up to 512GB of storage, the Razer Blade 15 Advanced is a stellar gaming laptop. It’s got all the power you could ever want (or need) in a laptop, and the device itself has a strikingly sleek aesthetic that everyone will love. It’s pricey, but you get what you pay for. There’s also an option for a standard FHD display with 240Hz, too, if you’d prefer a higher refresh rate to 4K.

The Alienware Area 51M is the most powerful (and expensive) gaming laptop you can buy right now. With up to an RTX 2080 GPU, up to an 9th Generation Intel Core i9-9900 processor, up to 64GB of RAM, and up to a whopping 2TB of storage space, this laptop is essentially a portable supercomputer. Its 17.3-inch display is the weakest part of the package, but even that is still great overall, as it’s an FHD screen with 144Hz. You’ll need to sell an arm and a leg to afford this device, but you won’t need to worry about upgrading for a long time, either.

While high-end RTX devices are typically expensive, you can get laptops that have some of the lower-end RTX cards and still have an incredible gaming experience, all while saving some money. Enter the Lenovo Legion Y740, which is designed specifically to fill this niche – with the option to select either an RTX 2060 or 2070, its 9th Generation Intel Core i7-9750H processor, its 16GB of RAM, and its 256GB of storage, the Lenovo Legion Y740 perfectly fits the bill of an affordable RTX device. The 15.6-inch FHD 144Hz display is nice, too.

For folks who have less money to spend, gaming laptops that are equipped with NVIDIA GTX graphics cards are great choices. While they won’t give you the same level of power that RTX devices do, they still provide enough to enjoy modern titles efficiently without needing to worry about performance issues. Devices fitted with NVIDIA’s GTX 1660 Ti specifically are meant to be on the affordable side, though all laptops that have GTX cards of any kind will be less expensive than state-of-the-art RTX gaming laptops.

The HP Gaming Pavilion is the best overall GTX laptop you can buy right now, achieving an excellent balance of power, price, and looks. With its GTX 1660 Ti Max-Q GPU, 9th Generation Intel Core i7-9750H processor, 15.6-inch FHD 60Hz display, 8GB of RAM, and 256GB of storage space, this laptop is definitely the best way to get a competent portable gaming rig in your hands without breaking the bank. It looks stylish, too, which is always a nice bonus.

People looking for a GTX laptop that has the best overall storage space should opt for the Lenovo Legion Y540, as it comes with a 1TB hard drive and a 256GB SSD, which is more than other laptops at the same price range. It’s rocking a GTX 1660 Ti, a 9th Generation Intel Core i5-9300H, 16GB of RAM, and an 15.6-inch FHD 60Hz display, too, making it more than capable of handling modern gaming. Ultimately, the HP Gaming Pavilion is better in terms of raw power since it has a considerably better CPU, but if you own a ton of games and need lots of storage space, this laptop may be a better pick for you.

Dell’s G3 Gaming Laptop will be the best choice for you if you want good performance while being as easy on your wallet as possible. Out of all of the devices in this article, the G3 boasts the lowest, but that doesn’t mean it doesn’t perform well. In fact, between its GTX 1660 Ti GPU, 9th Generation Intel Core i5-9300H processor, 8GB of RAM, 512GB of storage, and its 15.6-inch FHD 60Hz display, this budget device packs quite a punch.

Folks who want a GTX laptop with high-end capabilities will enjoy what the Acer Predator Triton 700 has to offer. Packing an overclockable GTX 1080 Max-Q graphics card, a 7th Generation Intel Core i7-7700HQ CPU, 32GB of RAM, 512GB of storage, and a 15.6-inch FHD display with 120Hz, this is a beefy GTX device that gives the lower-end RTX laptops out there a run for their money. Since the GTX 1080 is just about between the RTX 2060 and the 2070 in terms of power, this laptop will provide a comparable experience to what you’d find using a device with those cards – though, it won’t be able to support ray tracing or DLSS.

Which device should you choose?

With so many amazing NVIDIA-powered laptops out there this holiday season, it’s tough to know which one is the best for you. I would say that if you’re looking for a premium experience and are willing to pay up, the Razer Blade 15 Advanced is the best choice. If you’ve got the cash for it, the Alienware Area 51M is also a fantastic choice as well. If you want RTX but don’t want to spend a lot for it, the Lenovo Legion Y740 should be your go-to.

People who are looking for a mid-range device would be better off using one of the GTX laptops on this list. The HP Gaming Pavilion is my personal favorite because I think it offers an excellent balance of capability, cost, and style, but folks who are looking to save as much as they can will love the Dell G3 Gaming Laptop. The Acer Predator Triton 700 should be your choice if you want high-end GTX, as the GTX 1080 GPU offers power that is similar to some of the newer RTX graphics cards.