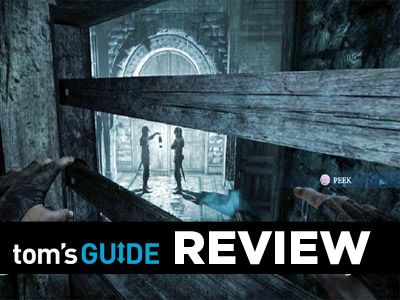 "Thief" isn't too confident in its story, and it knows even less how to tell it.

You play as Garrett, a well-established burglar and thief-for-hire in The City, a sprawling medieval-like hub of twisting cobblestone streets dotted with electrical lamps that signal the onset of a steampunk-style industrial revolution. At the game's beginning you'll team up with Erin, a young woman and former apprentice of Garrett's who now works on her own, to deliver a recently stolen item to the client's drop point.

Lately in video games the leading lady is either the main character's love interest or his daughter. Erin seems like she could be either, but the game isn't ambiguous on this point so much as it is noncommittal.

Throughout this prologue, Garrett will chide Erin for using the Claw, a sort of climbing pick that helps her scale walls, and for killing one of their opponents. When Erin protests that killing is part of the job Garrett proclaims that he only kills when he has to.

At the end of the prologue, in a cutscene (a prescripted non-playable scene) Garrett and Erin fight over the Claw, and Erin ends up falling through a roof into the midst of a strange ritual. Garrett falls after her and loses consciousness. Later, he awakens to find himself back on the street, now with one vividly blue eye and the ability to see important objects when he focuses.

From the Queen of the Beggars, the blind leader of a homeless network, Garret learns that he's been unconscious for an entire year. Further, The City is worse off than ever thanks to the evil Baron's ever-increasing taxes and a new disease sweeping the lower classes called the Gloom, which is apparently like the plague crossed with severe depression.

Assuming that Erin is dead, despite his own miraculous survival and year-long sleep, Garrett decides to resume business as usual and visits his fence Basso in order to pick up new jobs. (At this point, by the way, the Claw is a staple of Garrett's inventory, despite his criticizing Erin for using it in the prologue.) But with a new client named Orion who leads a populist rebellion against the Baron, and plagued with visions of Erin, Garrett's life won't be going back to normal anytime soon.

This all makes for a great premise to a story, but because Garrett evinces no real concern for any of these events or takes any direct actions based on these opening events, none of it feels particularly urgent. The game's story arc doesn't really begin until Garrett's fence and friend Basso is arrested for working with Orion. That means the first three chapters, plus the prologue, just feel like going through the motions.

"Thief" tells its story with just as little conviction as its protagonist has. Garrett talks to himself throughout the game without any conversational or decision-making input from the player, kind of like a voiceover narration. That makes it seem like he should be a fully fleshed-out character, as opposed to a vessel created by the player's decisions. However, aside from sarcasm he fails to leave any distinct impression of personality or desire, other than to keep stealing stuff — an excellent quality in a thief, perhaps, but not great for a main character.

The game's habit of clumsily switching between first and third-person perspective further distances players from creating a relationship with Garrett. Almost all of the game itself is played in first-person, and focuses on action and exploration. Here the game does an excellent job of making players feel like Garrett's body is moving behind the first-person camera; when you look down you see his feet, when you grab items his hands swing up as the camera moves forward, when you reach ledges he hunkers down to peer at the ground below.

Communicating the game's main plot is left largely to frequent third-person cutscenes, which feel particularly jarring after the first-person gameplay: sometimes we are Garrett, and then abruptly we are watching Garrett. Perspective is one of video games' most unique storytelling tools, but "Thief" switches haphazardly between the two, using the third-person cutscenes like a crutch to tell the story it can't quite convey in the interactive space of the first-person.

It seems disingenuous to talk about "Thief" without talking about "Dishonored," a 2012 game from whom "Thief" has borrowed heavily. "Dishonored" did itself draw from the original 1998 game "Thief: The Dark Project," but it used that game's groundbreaking stealth-based combat in a compelling original story.

In "Thief," a medieval steampunk city split along harsh class lines, a mysterious illness, the story beginning with a woman's death, a mystical old beggar woman, even a level that takes place in a brothel — all these are lifted almost straight from "Dishonored." There's nothing wrong with paying homage to another story, or sharing good ideas — the problem is that you might as well just play "Dishonored."