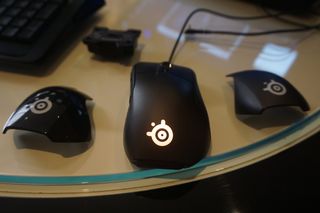 LAS VEGAS – OLED is a hot term in the TV realm, but now it's coming to gaming mice in the SteelSeries Rival 700. A tiny, black-and-white OLED screen uniquely sits near the thumb buttons. Sure, you can still program profiles with your favorite colors and button combinations, but now you can also add your favorite animated GIFs to the mix.

When SteelSeries showed me the Rival 700 at CES 2016, my first reaction was surprise. Why would anyone need an OLED screen on a mouse? What on Earth could you do with one? My fears were dispelled as soon as a SteelSeries representative showed me how I could load an animated GIF of Nicolas Cage's ever-expressive mug right on the side of the mouse.

The GIFs are not just for show, either. Just as players can use different colors to distinguish between profiles on a gaming mouse, they can use the Rival 700's OLED screens to signify their button combinations, dots-per-inch (DPI) sensitivities (up to 16,000) and other fine-tuned settings. SteelSeries plans to allow users to share their profiles in an online database, and an animated GIF will act like the cover on a book. Imagine, for example, customizing a great setup for Protoss players in StarCraft II, and stamping it with an OLED GIF of one of the psionic warriors.

(Naturally, I did no such thing, opting instead to load the screen with a GIF of Homer Simpsons screaming at an exploding can of snakes.)

The OLED screen is the most notable thing about the Rival 700, but by no means the only feature that sets it apart from competing mice. The mouse is highly customizable, featuring swappable cables (braided or smooth), sensor units, face plates and name plates. Whether you want a glossy finish or a soft touch, SteelSeries will provide a mouse cover that fits your taste, and even plans to release exclusive plates to coincide with big games and gaming events.

Finally, the mouse takes a page out of the console controller playbook by offering tactile feedback. Those who turn their noses up at such things can deactivate it, of course, but I rather enjoyed feeling a slight vibration when I was getting shot in Counter-Strike, and it helped me avoid a few grisly deaths. Those who are worried that vibrations will throw off their aim need not be: the vibrations happen on an up-down axis rather than a left-right one, and had no noticeable impact on my hand position.

SteelSeries is working with Valve to implement vibration features, so to begin, only Counter-Strike and DOTA 2 will feature tactile feedback. It's possible that other games will follow if the feature catches on.

The Rival 700 does a lot of novel things for a gaming mouse, and doesn't ask that much more than a traditional peripheral for the privilege. It will be interesting to put the mouse through its paces for a full review and see how it stacks up.