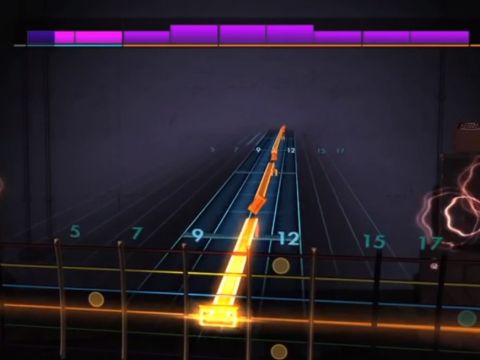 'Rocksmith 2014' won't make you into a guitar god, but it just might help you advance from a fledgling rocker into a bona fide ax-handler.

"Rocksmith 2014" will not make you into a guitar god, but if you have a little patience and dedication, it just might help you advance from a fledgling rocker into a bona fide ax-handler.

The concept of "Rocksmith 2014" is a simple one that's been tried before, with varying degrees of success, including in the game's predecessor, "Rocksmith." In that game, developer Ubisoft created a rock music rhythm game, à la "Guitar Hero," but replaced the plastic, five-button guitar with the real thing.

Like its predecessor, "Rocksmith 2014" includes a cable that allows you to plug any electric guitar into your Xbox 360, PS3, PC or Mac, but doesn't offer much in the way of rock star fantasy wish-fulfilment.

There's definitely some enjoyment to be had, but make no mistake: "Rocksmith 2014" is a teaching tool, and you'll have to put in some actual hard work to get anything out of it.

If you're a novice guitarist, don't expect to just plug your instrument in and start shredding like Eddie Van Halen. When the game begins, you select whether you're a beginner, an expert or something in between, and go from there.

While the game theoretically works with any electric guitar, not all guitars are created equal, and the quality of your instrument will affect your gameplay experience somewhat.

Tom's Guide played through the game with a well-worn Ibanez Stratocaster clone, and we found it challenging just to get past the very first tuning prompt.

Although getting there can be a little draconian, once you access the game's main menu, there's a ton of content to explore. "Rocksmith 2014" boasts more than 50 recognizable songs, a handful of challenging mini-games and an extensive library of interactive video tutorials.

The amount of stuff to do can feel overwhelming at times, especially since practicing guitar is exhausting, and the game does not lend itself to play sessions of more than an hour or two at a time. This is where the game's Missions come in.

At any given time, "Rocksmith 2014" will assign you three missions to complete. These start off as fairly simple (such as playing a song from the '80s, or watching a video on proper finger positioning), but get more complex as you progress (such as finishing a song with 85 percent accuracy, or repeating a solo section until you perfect it).

The missions, should you choose to follow them, also do a good job of keeping you from getting bogged down in any one section of the game for too long. You'll have three missions at any given time, and they will generally bounce from playing full songs to nailing difficult subsections to tackling the quirky mini-games.

As far as gameplay goes, "Rocksmith 2014" gives off a distinct "Guitar Hero" vibe at first glance, but the two series don't have very much in common under the hood. You select a song, and then play notes as they come toward you on a virtual fretboard, like in "Guitar Hero," but in "Rocksmith 2014," you'll grapple with six strings and more than 20 frets.

The key difference is that it's not really possible to fail a song in "Rocksmith 2014." If you nail every note, the game will automatically up the difficulty; if you screw up a tough section, the game will scale the song back down.

This adaptive behavior helps ensure that even the most musically challenged will hit a relevant note or two, while the aspiring Mark Knopflers and Jimmy Pages of the video game world won't get bored.

The mini-games, on the other hand, offer challenges to improve your dynamics, your timing and your sense of fret and string locations. In one of these games, you'll need to strum louder or softer to control the stream of water from a whale's blowhole; another casts you as a cowgirl who must defend her saloon from attackers by quickly selecting the correct string.

These mini-games can get repetitive after only a few minutes, but practice drills are just as important to studying a musical instrument as actually learning new songs, if not more so. The games are a relatively clever way to disguise this often-tedious activity, but it's still much more fun to just dive into the tracklist.