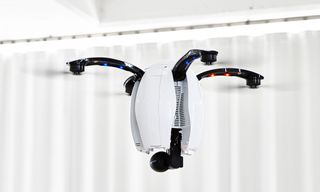 What's that in the sky? It's a bird! It's an egg! It's a...drone! PowerVision's newest flyer, the PowerEgg, certainly is the most unusual drone I've seen, but its odd form follows its function really well. We got a closer look at this ovular-shaped drone, available for $1,288, which will begin shipping in October.

In its storage mode, the PowerEgg looks like, well, a large white egg, or the world's largest pantyhose container. It's about the size of a rugby ball, and weighs 4.6 pounds. With the arms closed, the drone measures 10.7 inches long with a diameter of 6.9 inches at its thickest point. With the arms extended, its wingspan is 18.7 inches.

The rotor arms have to be opened manually, but the drone's four landing struts extend and retract automatically based on the PowerEgg's altitude. (Pilots can also manually operate the legs, and set the height at which they retract). Like the Yuneec Typhoon H, retracting legs are not just about the cool factor; it also gives the PowerEgg's camera (hidden under a removable white cap on the bottom) an untrammeled view of its surroundings.

The PowerEgg's camera has a 1/2.3-inch CMOS sensor with a 95-degree field of view, and can record video at a max resolution of 4K at 30 frames per second. It also has a fairly wide aperture of f/2.8, and has an ISO range of 100 to 3,200 for video. Similar to other drones, the camera is mounted on a 3-axis gimbal, to keep it steady during flight.

Owing to its odd shape, it's fun to see the PowerEgg in flight; it looks like some kind of alien spaceship as it hovers over the ground. Company reps said that, despite its design, the drone shouldn't be affected any more than other drones by gusts of wind.

Two controllers come with the PowerEgg. The first is a traditional two-handed affair that requires an Android or iOS device to get a video feed from the drone's camera. However, the transmitter (which PowerVision calls the Base Station) is housed in a separate unit, which has its advantages and disadvantages. It makes the controller a lot lighter, but it's a second piece of equipment you need to remember.

The second controller that comes with the PowerEgg is a one-handed device called the Maestro, which lets you operate the drone by moving your hand in the air, like a Nintendo Wii. The Maestro also has physical buttons and a directional pad if you find waving your arm to be too tiring.

The PowerEgg has a flight time of about 23 minutes, standard for a drone of its ilk, and a range of 3.1 miles from the base station.

For the price of $1,288, the drone will come with both controllers, battery, battery charger, and base station; those who order the drone before Sept. 30 will also receive a PowerEgg backpack, which will cost $218 after.

We're definitely looking forward to taking the PowerEgg out for a spin, so stay tuned for our review.