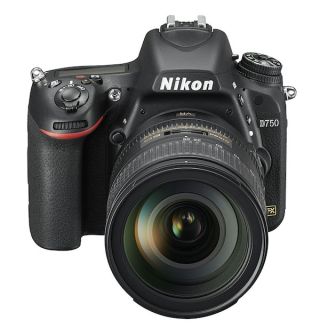 The just-announced 24-megapixel, full-frame Nikon D750 ($2,300) bears little technological resemblance to its long-discontinued D700 predecessor. A lot has changed in digital imaging since the D700 was launched more than six years ago, and the D750’s features reflect the improvements that have benefited cameras like the D810 and the D4S.

Within Nikon’s full-frame line-up, the D750 fits neatly between the D610 and the D810, making it ideal for photographers stepping up from a DX (mainstream APS-C size sensor) DSLR, or as a back-up camera for D810 or D4S shooters. Several features—including Group Area autofocus and advanced video capabilities, to name just two—are borrowed from the D810 and/or D4S. But the D750 beats them as the first full-frame Nikon DSLR with built-in Wi-Fi and a vari-angle LCD for flexibility when shooting video as well as photos overhead and from low angles.

I found the weather-sealed D750 to be well built — based on my handling of it during a pre-release briefing — thanks in part to its magnesium alloy top, back and bottom construction. The camera also features a built-in flash, Dual SD card slots and a 3.2-inch vari-angle LCD. While some controls have been moved around to make room for the tiltable LCD and there are now separate video and still menus, Nikon shooters will be able to transition smoothly to this new camera.

Specifications indicate solid performance with 6.5fps continuous capture, more than 1200-4400 images per battery charge (depending how much you use the flash) or 55 minutes of HD video. Default ISO light-sensitivity ranges from 100 to 12,800, but you can expand that to a low of 50 and a high of 51,200. Autofocus, particularly in low light, has been improved as well.

Highlight weighted metering promises better exposure accuracy for images where the main subject is, for example, under a spotlight. (Think concerts and plays.) Picture Control—for stills and videos--now features a “Flat Picture” option that provides a broad tonal range. Image parameters can further be adjusted with the new Clarity slider, within Picture Control.

As the first company to produce a DSLR with video (the Nikon D90), it’s no surprise that Nikon has been emphasizing video features in its DSLR line. Like the D810, the new camera offers a Power Aperture option that allows smooth changing of aperture settings for better transitions and less noise that might interfere with the video. Other features include Zebra patterning to indicate overexposed highlights on the screen when shooting video.

Nikon has managed to pack a broad assortment of the latest features in this compact (5.6 x 4.5 x 3.1 inches) and lightweight (1 pound 10.5 ounces) DSLR. While I, and many other photographers, have been waiting for a D700 replacement for quite a while, it looks like Nikon has put together a camera that—at least for me—has exceeded expectations. I suspect that others who have been waiting for a D700 successor for so long will embrace this new model.

New Flash and wide-angle lens on the way

Also slated to ship in September are a new compact flash and wide-angle lens.

Like Nikon’s DSLRs, the company’s new $250 SB-500 Speedlight acknowledges the important role video plays in picture taking these days. In addition to functioning as a regular flash, the SB-500 is equipped LED lights that can function as a video light. The LEDs, which offer three brightness levels, are great for macro photography as well.

Powered by only two AA batteries (others usually require four AA’s), the SB-500 measures a nicely compact 2.6 x 4.5 x 2.8 inches, and weighs only 8 ounces. The flash head tilts up to 90 degrees and can also swivel horizontally for bouncing light to avoid hard direct illumination. The unit can also be used as a commander or remote to trigger additional speedlights in a multi-flash setup. This simple-to-use speedlight reaches as far as 78 feet (at ISO 100) and should be good for shooting with wide-angle lenses (such as the new 20mm) with 16mm24mm coverage.

The $800, AF-S NIKKOR 20mm f/1.8G ED lens is the fastest (i.e. largest-aperture) 20mm lens in Nikon’s line-up. With a 94-degree angle of view (on a full-frame camera), this lens should work well for shooting architecture and landscapes, among other genres and is a solid options when recording video. The lens measures 3.3 x 3.2 inches and weighs 11.1 ounces.

Writer and photographer Theano Nikitas has been covering photography for almost 20 years and has reviewed hundreds of digital cameras as well as other digital imaging hardware and software. Follow her @TNikitas1 and on Google+. Follow us @TomsGuide, on Facebook and on Google+.