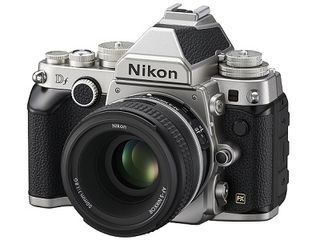 The future isn’t what it used to be, it would seem. Take a look at recent camera announcements for the Nikon Df or the Fujifilm X-E2 and you could be forgiven for thinking that we were back in the 1970s. These models have the leather grips and aluminum finish of professional cameras from the last century, and are part of a trend in camera design that looks backward to these classic cameras. Move over, Steampunk, the retro camera is coming through.

Fujifilm has been one of the main drivers of this trend with its X-series of cameras. Their first retro (or "classic design," as the company refers to it) camera was the FinePix X100. Launched in 2010, the X100 was a throwback that could switch between an electronic and optical viewfinder, with styling that owed more to the 1950s than the 2010s.

It could have just been an oddity, but instead X100 started a retro trend for camera manufacturers. The X series now includes five cameras and eight lenses, a sure indication that this range has proved popular with modern photographers.  However, Fujifilm claims that the design of the X100 wasn't a specific choice to be retro, but was more about usability with the buttons and knobs that allowed photographers of old to make quick adjustments.

"The idea behind the Fujifilm X-Series was to give photographers the easiest and most natural way to access each setting instantly," Yuji Igarashi, director of business and product development at Fujifilm North America, told Tom's Guide by email. "The X-Series is committed to the design elements that make these cameras both highly functional and aesthetically pleasing."

Other companies join the retro bandwagon

Olympus harks back to its own history with the OM-D E-M5, a Micro Four Thirds (aka mirrorless) camera that bears more than a passing resemblance to its own OM-1 from 1973 and OM-10 from 1979. This similarity stretches to having a bump on the top (despite not having a prism inside) and using the same textured grip strip around the body and weather sealing on the body and lenses as the older models did. These features made the original popular with wildlife photographers, and the company is obviously hoping that the same thing will happen with the OM-D E-M5, which it's marketed to.

Olympus is also taking another deep dive into its own history with the new OM-D E-M1, its second digital camera to use the venerable OM name.  The E-M1 adds even more buttons and dials to the mix, offering a button or dial control for almost every feature of the camera. But as a counterpoint, it also has a sophisticated focusing technology that is allowing mirrorless cameras to better compare with DSLRs.

Pentax is also looking back with its Q7 and Q10 models, which have an unusual boxy design reminiscent of the film cameras that the company produced in the 1970s: the Auto 110. These were the smallest interchangeable lens cameras of their time, and it seems that Pentax is aiming for that title again.

Even companies that didn't make film cameras are looking to go retro: the recently launched Panasonic Lumix GM1K is described by the company as a "fashion forward camera with an iconic style." In this case, iconic design means that the GMK1 is reminiscent of the film cameras of the 1970s and '80s, particularly the Leica cameras in the M series that were beloved by professional photographers. That's fitting, since Panasonic has long used Leica-designed lenses in its digital cameras.

More recently, Nikon has taken this retro trend to heart with the Nikon Df, a new DSLR that pays homage to the company's own F2 and F3 film SLR lines from the 1970s.

Compatible with the company's own Nikkor lenses from before 1978 (which don't work with Nikon's DSLRS), the Df is a deliberate attempt to capture the heart of those who remember film fondly. It's also the first retro camera to use a so-called "full-frame" sensor, which is about the same size as a frame of 35-mm film and is the standard for high-end DSRL and mirrorless cameras. "The Df brings together the best of yesterday and today for advanced full frame photographers," said Nikon, in announcing the camera.

Chris Chute, research director for digital imaging at IDC, thinks these cameras are proving to be popular among well-heeled photographers who like the professional look and feel.

“Their availability is driving ILC (interchangeable lens camera) demand due to nostalgic, fashionable designs that many prosumer photographers fall in love with (and have the income to afford)," he told Tom's Guide via email. These "prosumers" that Chute refers to are serious photographers who don't mind spending extra to get the same stuff that the professionals use. "They amount to about 37% of ILC users in the U.S.," Chute said.

So, if these cameras are appealing to a large group of well-off users who like to spend money on professional equipment, they aren’t going anywhere. Chute expects that more manufacturers will jump onto the retro bandwagon, and that we will see more cameras that prove the adage that what goes around, comes around.