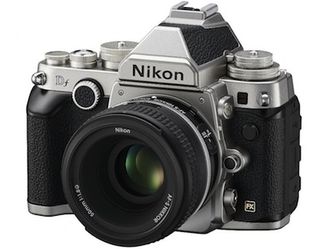 The new Nikon Df, the company's latest DSLR camera, harkens back to the golden age of film photography: The recently announced camera bears an uncanny resemblance to Nikon's film cameras and shoots only still images, forgoing the ubiquitous ability of DSLRs to capture video.

Priced at $2,749.95 for the body only, the Df is a high-end DSLR that the company hopes will appeal to those who remember classic Nikon 35mm film cameras of the 1970s and 1980s. In particular, the Df is designed to resemble the F2 and F3 series, which were high-end models used by professional photographers.

The Df shares many design features with these cameras, including a leather-textured grip, slim profile and magnesium-alloy body. It also uses the old-style Nikon logo that was replaced in 2003. But the most important carryovers from these historic cameras are the controls.

The Nikon Df has manual control dials for shooting mode (such as auto or manual), shutter speed, power, ISO (sensitivity) and exposure compensation, all located on the top of the body. A small calculator-style monochrome LCD on the top shows the shutter speed, aperture and images remaining, further echoing features seen on old-fashioned cameras.

The physical dials on the Df should allow users to make adjustments quickly. On the older cameras the Df imitates, photographers could, with practice, change most settings without looking up from the viewfinder because the grooved texture of the dials and click-stop response made settings easy to change with a light touch.

And, like these analog cameras, the Df doesn't shoot video. Nikon claims that this unusual feature choice was meant to allow photographers to focus on still images. "It was specifically removed because the concept of this camera is just for photographers," Mark Soares, technical marketing manager at Nikon, told Tom's Guide.

The internals of the Df are far from retro: It uses the same 16.2-megapixel full-frame sensor as the flagship Nikon D4, and offers an ISO range of 100 to 12,800, with high ISO modes that go up to 204,800 — the same as for the Nikon D4 and one of the highest for any camera. To put that into perspective, such high sensitivity would easily allow you to capture photos of dark scenes that you could barely discern with the naked eye.

The Df also uses Nikon's signature 39-point autofocus system, which works well in low light and for tracking a moving or off-center subject. It also has a 3.2-inch, 921k pixel LCD screen. In addition, it can use Nikon's WU-1a Wi-Fi adapter to send images to a mobile device and from there to the Internet, or to control the camera from a remote PC wirelessly. There is no built-in flash, but a hot shoe that supports most flash units is included. The Df also supports Nikon's proprietary Creative Light System (CLS), which can control several flash units at once.

This retro-style approach to design also means that this is the first DSLR from Nikon that can use the company's older lenses. Those made by Nikon before 1977 under the Nikkor brand don't include a feature called automatic maximum exposure indexing (or Ai), in which a small notch in the lens mount lets the camera body know the maximum aperture of the lens. The Df is the first DSLR that can use lenses that don't have Ai, which could open up new possibilities for yard-sale lens buying. Nikon has a guide on how to figure out if a lens has Ai (and the later AiS variant).

Of course, these older lenses will not have the same features as newer ones; they will offer only manual focusing, for example.

Nikon is also releasing a new special-edition lens to go with this camera's vintage styling. The 50mm F/1.8G Special Edition lens has the same aluminum focus ring and color as these older lenses, but it uses the much newer AF-S connection, which allows for full autofocus. The lens will cost $279.95 if bought separately. The Df will be priced at $2,749.95 for the body only, or $2,999.99 with the special-edition lens.  Both the camera body and lens will go on sale in late November, according to Nikon.