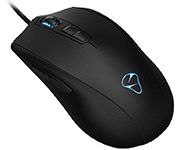 The Avior 7000 should have been a much better mouse, but broken software and questionable design choices hold it back.

In the competitive gaming-mouse market, competence is not enough. The Mionix Avior 7000 ($79.99) is an accurate, responsive and precise piece of hardware, but so is almost every other gaming mouse available.

Although the Avior 7000 looks pretty, it falls far short of the mark in terms of comfort and workable software, making it a potentially very expensive mistake. In a world that's filled to the brim with excellent mice, there's no compelling reason to choose the Avior 7000.

The Avior 7000 is a fully ambidextrous mouse, but that means it's not very comfortable for either righties or lefties. The mouse has a matte texture all around, without any specialized textures for the thumb or two outermost fingers.

As a result, the Avior 7000 is not exactly hard to hold, but it's not nearly as comfortable as it could have been. Otherwise, the mouse is long with a low profile, making it suited — but not optimized — for either palm or claw grips.

The button placement on the Avior 7000 is easily its biggest design flaw. In theory, users can program nine different buttons, but in practice at least two of them will go unused. Since the Avior is an ambidextrous mouse, it has thumb buttons on either side. You'll need to disable whichever two you don't use, or else risk clicking them every time you click one of the primary mouse buttons. Thumb buttons that don't get in the way by default would have been a better design choice.

Aside from the second set of thumb buttons, the buttons are straightforward enough. The thumb buttons are distinct and provide a satisfying click. The Avior 7000 also possesses a left button, a right button, a clickable scroll wheel and two dots-per-inch (DPI) sensitivity buttons directly beneath the scroll wheel. Each button feels good and functions well.

The Avior is perfectly usable, but unimaginative and burdened by a few recurring annoyances.

Except for driverless mice like the Feenix Nascita, gaming mice live and die based on the quality of their software. In this respect, the Avior 7000 is all shine and no substance.

At first glance, the Mionix Avior 7000 Software has everything a hardcore user would want to customize the mouse: five distinct profiles (with the ability to import and export more), customizable illumination to tell the difference between them, granular DPI settings between 50 and 7,000 and a simple menu for assigning commands to each button. In addition to mouse and keyboard commands, users can also program macros or switch profiles.

The major problem is that the software is a broken, buggy mess. We were able to reproduce a catastrophic error on every system we tested. Attempting to alter more than one parameter at a time caused the software to crash without registering the changes.

Restarting the program and attempting to change even a single parameter would cause it to crash again. Rebooting the computer had no effect, nor did reinstalling the software. We eventually rectified the issue by resetting every profile to default specifications, undoing all of our meticulous work.

We were shocked to find software this buggy attached to a mouse with an $80 price point. That it has such an obtuse fix is only salt in the wound. We contacted Mionix to ask whether it was aware of the bug or intended to fix it, but did not receive a solid answer.

Even without the bugs, the software is still nothing to write home about. It lacks the ability to link profiles with games, meaning you'll have to manually apply them, and has no internal profile storage. If you need to take profiles with you, you'll have to export and transport them manually.

If you can grapple with the profile software long enough to get into a game, the Avior 7000 does not disappoint. It's a good all-purpose mouse that worked well with each of our test games: "BioShock Infinite," "StarCraft II," "Batman: Arkham City" and "World of Warcraft." Our movement always tracked well, and the response time from each of the buttons was flawless.

The two extra buttons also made tasks like sneaking up on enemies in "Arkham City" or selecting battalions in "StarCraft II" very easy. For titles that don't need DPI adjustment, such as "World of Warcraft," we could even reassign the DPI shift buttons to access other useful features, such as a quest log or an auto-run command.

The only real negative aspect about the Avior 7000's performance is that it's not meaningfully different from other gaming mice. In fact, in our experience, it was much less receptive to non-gamepad surfaces than most comparable devices.

To its credit, the Avior 7000 boasts phenomenal Z-axis tracking (picking up the mouse and replacing it causes no perceptible cursor movement). Its liftoff range is customizable, letting users decide how far off the surface they can raise it before it stops responding.

With a good performance and a sleek interface, the Avior 7000 should have been a much better mouse than it turned out to be. Instead, broken software and a few questionable design choices hold it back. For its hefty $79.99 price tag, you could — and should — invest in a much more reliable piece of technology.