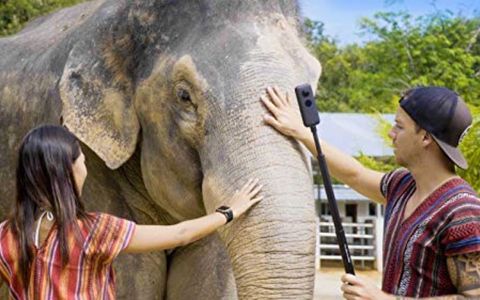 It's not just the quality of the photos and videos that impressed us about the Insta360 OneX; it's what we could do with them after that makes this 360-degree camera so great.

360-degree cameras are still a niche product, but if companies like Insta360 keep finding new ways to take advantage of their immersive video and photo capabilities, these devices could catch on quicker. Insta360's newest camera, the OneX, is remarkable not just for the quality of the images it captures, but what it lets you do with them afterward. At $400, the OneX isn't cheap, but its features and design make it one of the best 360 cameras around.

Where the older Insta360 One has a pill-like shape, the OneX has a flatter design — like the Ricoh Theta V —  that makes it much easier to stuff in a pants pocket. Measuring 4.5 x 1.9 x 1.1 inches, the OneX should slide in comfortably, too. I liked its soft-touch finish, which helped me steady the camera in my hand; you have to hold it pretty far down to keep your fingers from getting in the photo.

On one side of Insta360's camera are two buttons, which are used to power on the device, select various options (such as switching between photo and video modes) and start and stop recording. It takes a few minutes to figure out how to navigate, but after that, the OneX was pretty easy to use.

On one of the elongated sides is a hatch for the camera's removable battery, while the other side has a microUSB port, which you can use to both recharge the battery and connect the camera physically to your phone. The bottom edge has a microSD card slot and a tripod mount.

The Insta360 OneX can record 5.7K video at 30 fps, which is higher than all other consumer-grade 360 cameras. That said, you need a pretty good memory card (UHS-I V30, exFAT[FAT64] format; max storage capacity 128GB) to record at that resolution. When I tried several lesser cards, the camera stopped recording after a few seconds. Still, if you switch to a lower resolution (4K/50 FPS or 3K/100fps), you can get away with using a different card.

In bright environments, the OneX delivers detailed photos and video. When biking around on a sunny day, the fall leaves were sharp and clear, and were even better defined at 4K. Photos, too, were crisp. However, in overcast or darker conditions, the camera starts to lose details; it's harder to pick out individual blades of grass or tree leaves.

But what makes this camera particularly innovative is not image quality: Insta360 has added new features to the OneX that take advantage of the camera itself. The most significant is FlowState Stabilization, which automatically smooths out video, no matter how bumpy the platform.

The Insta360 OneX can record 5.7K video at 30 fps, which is higher than all other consumer-grade 360 cameras.

To show off this feature, Insta360 mounted its camera to a hawk; not having one available, I used a drone instead. While the drone itself — a DJI Mavic 2 Zoom — was quite stable, the video from the OneX was as steady as if it were mounted on a tripod.

Insta360 has added features to the OneX that take advantage of the camera, such as FlowState Stabilization, which automatically smooths out video, no matter how bumpy the platform.

In an even more extreme test, I then mounted the Insta360 OneX to the back of my dog Hunter, and took him for a few runs in the park. With him running at full tilt, there's a little bit of shakiness, but given how much Hunter is moving, it's remarkable how steady the footage is. With Flowstate turned off, the horizon pitches 45 degrees to the right and left several times a second; with Flowstate turned on, it barely moves.

As interesting as the 360 video is in itself, it can be hard for the viewer to figure out what they should look at. The Insta360 smartphone app (for Android and iOS) includes some smart editing tools that really take advantage of the format. For starters, it lets you connect to the camera via Wi-Fi, so you can get a live look at what the OneX is seeing, and start recording videos or take photos.

Once you've shot your masterpiece, using the app you can select objects or people of interest at various points in the video, and the editor will automatically pan the camera to those points. There's also a person-tracking feature, if you want to keep a particular subject in the center of the frame.

The OneX also has an algorithm that automatically removes selfie sticks attached to the camera for a more immersive image. If you're holding the camera in your hands, the tips of your fingers get cut off, but otherwise, this feature performs as advertised.

Originally debuting on the older Insta360 One, the Bullet Time feature gets an upgrade to 3K resolution on the OneX. This innovative feature lets you create Matrix-style videos; first, you record a video while spinning the camera around your head using a selfie stick or the included lanyard. The camera then stitches the video so that you can view yourself from all angles. It's pretty cool.

Other features include TimeShift, which lets you speed up and slowing down sections of the video, and options for adjusting color, exposure, tone and more.

Insta360 also has a beta desktop app for Macs and PCs, but as of this writing, it lacks many of the features found in the mobile app such as person-tracking and TimeShift.

Is the $100 price difference between the OneX and the One worth it? Besides the design, the main difference between the two devices is that the OneX has a higher-resolution camera than the One, but while it can record 5K video, the OneX's still shots have a lower pixel count. The OneX can also take HDR 360 photos, interval 360 photos and RAW 360 photos, where the One cannot. Finally, the OneX has Wi-Fi built in, so you can preview and control the camera wirelessly from your smartphone.

Otherwise, all of the features — Bullet Time, Flowstate and SmartTrack — are available on both cameras.

Consumers looking for great quality 360 photos and video in a pocket-friendly form should get the Insta360 OneX. Action-sports junkies may prefer the more compact — but more expensive — Rylo 360 ($499), which has a GoPro-like shape and  image stabilization. But for most, the Insta360 OneX will suit the best.