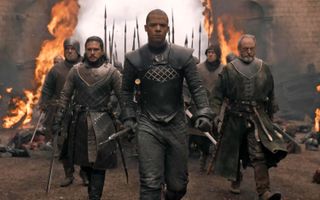 As I've stated before, I haven't watched Game of Thrones in five years, so I don't really have a dire wolf in the fight over the ending. Was it the only logical culmination of the story? Was it a victim of Season 8's rushed plotting? Was it so bad that you want to hire a new creative team to completely redo it?

While I'm hesitant to throw fuel on that particular fire, there may actually be a way to do just that.

No, I'm not suggesting that you go out and sign some kind of asinine petition. (If we learned anything from the Mass Effect 3 debacle, it's that we should probably respect the sanctity of the creative process, even if we don't like the end result.) What I am suggesting is that if you hated the Game of Thrones ending and are convinced you could have done a better job, there is actually a very simple method of putting your money where your mouth is. Better yet: It's inexpensive, fun, and a great way to hang out with your friends for a few hours with some pizza and beer.

The answer, of course, lies in the Game of Thrones tabletop role-playing game.

Wait, come back! Before you run away screaming, let me acknowledge that tabletop RPGs have a (somewhat deserved) reputation as an insufferably nerdy pastime, one step above folks who hang out in the woods pretending to be vampires on the weekends. But frankly, you're the one who just spent eight seasons watching dragons burn down castles in a medieval fantasy kingdom, not me. It's time to own up to your nerdy tendencies; you may as well go all the way down this rabbit hole.

For the record, I should state that I am not the only person to come up with this idea. The Friday before the Game of Thrones finale aired, the fine folks at Green Ronin had the same thought. Green Ronin, of course, is the eclectic RPG publisher behind games such as Mutants & Masterminds, Dragon Age and, of course, A Song of Ice and Fire.

Without going into excruciating detail, Green Ronin has been publishing ASOIAF RPG materials ever since 2009. (Guardians of Order published a different Game of Thrones RPG in 2005, but went out of business shortly thereafter. The two events are probably not related.) A Song of Ice and Fire Roleplaying is based on the books rather than the TV show, but since the two settings are basically identical, there's no reason you can't use the system to make your very own television finale — or your very own Season 8, if you've got the time and inclination.

MORE: 10 Reasons to Keep HBO After Game of Thrones Ends

For those who have never played an RPG before, here's how it works: You and a bunch of friends get together for 3 to 5 hours, preferably in person but possibly via video chat. Most of you, the players, have character sheets, which you've designed from scratch as your avatars for the game. One of you, the Game Master, has basic notes for how the adventure will unfold. It's up to the players to act out their characters as best they can, and it's up to the Game Master to adjudicate the rules, in addition to playing all the supporting cast members and villains.

If this all sounds intimidating, don't worry; it's basically just playing a board game while doing some improvisational acting. No, your first session is not going to be the stuff of legends, but if you've ever played a video game RPG in which you design a character and make storyline choices, you already know the basics. Besides, a lot of lifelong RPG fans started playing Dungeons & Dragons in middle school. If a 12-year-old can figure out the rules to games like these, so can you.

What you need to play

First things first: I haven't actually played the Song of Ice and Fire RPG yet. I've read the quick-play rules, and my RPG group is interested in playing. But, as any battle-hardened GM can attest, the hardest part of a game is not reading a 300-page rulebook, or memorizing an intricate combat system, or bringing a world to life with only the power of your voice — it's getting five grown adults with everyday responsibilities together for 4 hours every week.

As such, I can't comment on the quality of the game, but from my perspective, it seems to have everything you need to stay true to the show. Combat is fast and brutal, and social encounters — known as "Intrigue" in the game — have their own rules and regulations, including character dispositions, relationships and rhetorical techniques. (For example, you could try to make a political alliance through charm, intimidation or seduction.)

MORE: Game of Thrones Wouldn't Be a Phenomenon Without Babylon 5

You'll also need all the standard RPG trappings, such as scratch paper, pencils and dice (about 10 six-sided dice, or 10d6, will work for this particular game). Those are easy to get. What's a little tougher is knowing which Green Ronin RPG books to purchase. After all, there are six hardcover books, to say nothing of downloadable extras.

The first thing you'll need is "A Song of Ice and Fire RPG: A Game of Thrones Edition" (Green Ronin Publishing, 2012). This is the game's core rulebook, and so it contains everything you'll need to know to play the game. Read through this cover to cover if you plan on running the game; read Chapters 1-10 if you simply want to play. The book costs about $50 hardcover at Amazon, or $20 for a PDF copy at DriveThruRPG.

If your group is extremely unfamiliar with RPGs and they don't want to read 200 pages of material, you can summarize the rules they'll need to know. You can also point them toward the much-more-digestible quick-play rules — which are free.

If all you want to do is create your very own house and go adventuring in Westeros, the core rulebook is all you need. But our project here is to rewrite the show's ending, which means we'll need all the relevant characters. While you generally create your own characters in tabletop RPGs, there's nothing stopping you from playing as established characters, particularly in licensed settings. For this, you'll need A Song of Ice and Fire Campaign Guide: A Game of Thrones Edition (Green Ronin Publishing, 2012). It costs $50 for a hardcover on Amazon, $20 for a PDF on DriveThruRPG.

This book contains descriptions and full stats for just about every important character who shows up in the books — and by extension, the show. All you have to do is copy their stats over to a character sheet, and you're good to go. To save you a little time, here's where you can find the characters who play a major role at the beginning of Season 8:

That's eight characters, and since you'll probably have three to five players, you'll have more than enough to choose from. If you need other characters, like Samwell Tarly, or Varys, or Robert Arryn, don't worry; they're in the campaign guide as well.

And as for planning adventures, that's actually the easiest part. Simply rewind the Game of Thrones story to the point where you felt it went off the rails (from what I can gather, this is the beginning of Season 8), and play out the same basic stories. Except, this time, your players will be able to make smarter/better/more in-character decisions, depending on what exactly it was you disliked about the show.

The Game of Thrones Wiki has episode recaps available, if you need to kick-start your memory. Be aware, though, that as your sessions continue, they're likely to stray further and further from the canonical episode stories, so you'll have to do some more legwork to keep everything in line.

Also bear in mind that it's entirely possible that you and your players will have different ideas about what the show's ending "should" have been. I don't have any particular advice for dealing with that, save to just play it out and see what happens. Remember, tabletop RPGs aren't about telling your perfect story; they're about creating a story together. If you're a good GM, that means the story is not going to turn out quite like you imagined it would.

Of course, the show didn't turn out quite like you imagined it would, either. But at least this way, you and your friends have some control over the outcome.