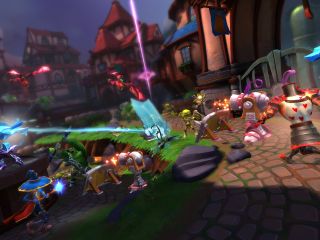 "Dungeon Defenders 2" is now strictly a tower defense game with role-playing game (RPG) elements rather than a MOBA (like League of Legends) That should be music to fans’ ears. After seeing what developer Trendy Entertainment is up to during this year’s New York Comic Con (NYCC), that tune sounds like a crescendo. Even in the game's pre-alpha state shown on the NYCC show floor, it’s much more comforting to see Trendy sticking to the original game’s roots.

But first, some background. In "Dungeon Defenders," four players team up, taking the role of one of four teenage fantasy heroes: a wizardly apprentice, a knightly squire, a disciplined monk and an agile huntress. Their mission is to defend a series of gates and a central point from an onslaught of fantastical monsters using special abilities and automated, stationary “towers” with varying abilities. Hence the moniker “tower defense.” Of course, "Dungeon Defenders 2" wouldn’t be a worthy sequel without some marked improvements on that formula.

For starters, the developer has made each of the game’s four default characters slightly more powerful to start, with two abilities and two types of towers mapped to the number keys. Of course, players are still limited by the amount of green (for towers) and blue (for abilities) mana they have, which drops off of the slain in the form of crystals. However, what stands out more than ever is how these towers and abilities work in tandem.

Trendy seems to have spent quite a lot of time focused on this mechanic, laying the foundation for players to discover interesting combinations. For instance, the wizard comes equipped with a twister attack that sends enemies upward for a few seconds. This gives the wizard a chance to freely charge his devastating wave attack. Yet this ability also enables the huntress’s nearby anti-air Skyguard towers to attack otherwise grounded units. (It helps that this is the most damaging tower in the game, currently.)

"Dungeon Defenders 2" is filled with these potential combinations. Another example is using towers in conjunction with environmental defenses. These defenses — such as dynamite installations or explosive firecrackers — are laid out on each map for any player to use, but with a limited number of charges. To make the best of them, the apprentice could slow enemies down with his freezing towers right next to a dynamite charge beset by the squire’s spiked blockades … and you know the rest.

These deadly combos will require much coordination between players, which is plenty welcome in a four-player cooperative tower defense. And based on how intense just the fourth wave of enemies — replete with armored orcs and flying demons — was during the demo, you’re going to need them.

For a demo of a pre-alpha build, "Dungeon Defenders 2" already looks gorgeous. Save for some missing graphical effects, like when players repair towers, Trendy seems to have the visual style of "Dungeon Defenders 2" down pat. This time around, the game seems even more attentive to detail, with towers and characters more animated than ever.

Trendy also promises that even more is in the works that the team wasn’t able to cram into its demo for NYCC, namely in-depth loot and skill point systems for heroes. Taking cues from more compulsory action RPGs, like "Diablo," only stands to make "Dungeon Defenders 2" even stickier. (If they’re implemented well enough, of course.) "Dungeon Defenders 2" is set to launch in Spring 2014 for Windows, Mac and Linux.