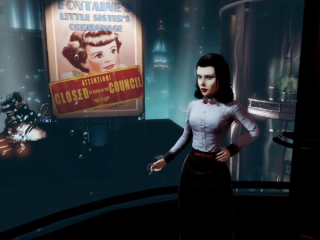 Irrational Games' "BioShock Infinite" took the gaming world by storm when it was released last March.

So gamers were thrilled when Irrational Games announced that a new downloadable content (DLC) entitled "Burial at Sea" was on its way.

MORE: BioShock Infinite DLC to Take us Back to Rapture

"Burial at Sea" will take Booker and Elizabeth, the main characters from "Infinite," to the underwater city of Rapture, the setting of the first "BioShock" game released in 2007. If you've played "BioShock Infinite" to the end, you know the reason why they're in Rapture.

It appears that "Burial at Sea" will have multiple parts; the trailer specifies that "Episode 1" will be released around the upcoming holiday season.

The video opens in darkness, with muffled, distorted voices shouting as if players were hearing them from underwater. You can hear Elizabeth say "He's lying!" and another man shouting before Booker (through whom players experience the story in a first-person view) awakens at a desk in a dimly lit room, coughing as if he'd just choked down water.

"Burial at Sea" is heavily inspired by the film noir of the 1940s and '50s. Elizabeth's entry is one movie reference after another. Her line "how about we start with a light?" recalls Lauren Bacall's line "anybody got a light?" from the 1944 film "To Have and Have Not."

Elizabeth asks Booker to find a young girl, and hands him a picture of a girl with a doll; the words written on the picture are "Sally with Sarah 1957."

When Elizabeth turns her back, Booker looks down at his hand, which is holding the head of the doll in the picture. Booker says the girl is dead, but Elizabeth says she's alive, and offers to pay Booker to help find her.

After Elizabeth exits, the cutscene ends and the player takes control. An objective appears at the top of the screen: "See what Elizabeth knows about Sally," as does a health meter.

Elizabeth says she knows someone who knows where Sally is, and she then leads Booker (the player) through a gleaming, prosperous Rapture that has yet to fall into the ruin in which "BioShock" players found it. "BioShock" players will recognize Little Sisters, Big Daddies, and other familiar sights.

Pay attention when Elizabeth and Booker reach an elevator decorated like the 50th anniversary cover of the novel "Atlas Shrugged" by Ayn Rand.

Here, their conversation suggests that Sally is Booker's daughter, that Elizabeth is a newcomer to Rapture, and the Little Sisters have something to do with both of them.

In the elevator, you can see the letters "AD" tattooed on the back of Booker's right hand, like in "BioShock Infinite."

Booker continues to ask why Elizabeth believes Sally is alive.  "A cop friend of mine, Sullivan, says they found [Sally] floating in the docks," he tells her. Sullivan was a character in "BioShock," Andrew Ryan's head of security. Though he died before the player arrives in Rapture, several of his audio diaries can be found scattered across the map, which give his account of Rapture's fall.

Elizabeth replies that in the hypercapitalist world of Rapture, childhood is just another commodity, and there are people who make their living buying and selling it.

"I'm taking you to one of them," she says, stamping out her cigarette as a poster for "Fontaine's Little Sister's Orphanage" looms in the background just before the screen fades to black.

What do you make of the first five minutes of "Burial At Sea: Episode 1?" Leave your theories and observations in the comments.