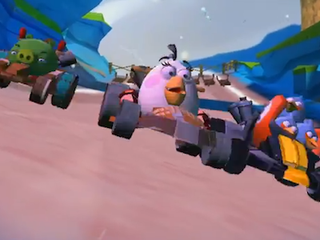 For years, the "Angry Birds" have established themselves as the leader in combo action/strategy games, with a number of releases over the years through Rovio Games, including the more recently "Angry Birds: Star Wars II." This December, however, the birds and pigs will turn in a new direction, hitting the road in a new kart-racing game.

Titled "Angry Birds Go!," the game was first teased a few months back with a teaser trailer featuring live-action costumed characters racing against each other. Today, though, Rovio revealed actual gameplay footage, where characters race against one another in high-stakes kart-racing action. You can view it in action below.

Like any traditional kart-racing game, such as the "Mario Kart" series, "Angry Birds Go!' will feature an array of characters from the series, along with power-ups that will help them catapult into the lead, as well as aerial stunts to gain turbo boosts. A number of modes will also be available, where players can challenge one another to see who's king of the track.

"Angry Birds Go!" also marks the first time that the series moves into full 3D, rather than the traditional side-view set-up that past games like "Angry Birds" and "Bad Piggies" have taken.

The game is currently scheduled for a December 11th release date, though there's no word on pricing just yet. More DLC (downloadable content) is also being planned, and should be announced shortly after the game's release.

One thing, though – if the birds and pigs don't have any arms…how can they steer?!