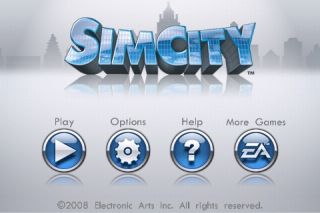 For you sim fans out there, Electronic Arts has just released Sim City for the iPhone and iPod Touch this week to the [iTunes App Store->http://itunes.apple.com/WebObjects/MZStore.woa/wa/viewArtist?id=284800461#B#]. For those unfamiliar with the franchise; it is a fairly accurate simulation of city planning, design, and management by allow the players to become the Mayor of a virtual city. The latest iPhone iteration is a feature complete release (unlike Spore Origins).

Sim City for the iPhone also uses the multi-touch interface and allows users to pinch for zooming, swipes for screen movement, and double taps for preset zoom levels. We’re happy to report that, for the most part, the interface functions very well and allows players to quickly get to what they need. There are; however, graphical slowdowns when you are moving between option screens, or zooming in and out of the cityscape. But in general, the game runs very well on the iPhone. We experienced more graphical slowdown with a game such as Aurora Feint than Sim City, which is very impressive.

There are times when the UI wasn’t as responsive as we would have liked and the precision needed to place specific stretches of roads or plots on a grid proved a challenge. However, EA has implemented a solution where you can readjust the placement of your items after you’ve selected the area of the grid; you are also given the option to confirm/cancel your action so accidents are kept to a minimum.

Natural disasters are all present and players will have the option to turn them on or off at the options screen. Long time players will tell you that there’s nothing better than unleashing UFO’s on your city just for fun.

An events ticker scrolls at the bottom of the screen, informing you of the important current events. Players also has access to “advisors” that can offer you insight and advice on such current events. Advisors for all areas of the municipal management are available for your use, while petitioners (concerned citizens) will sometimes bring you concerns directly.

The game can only be played in landscape mode and there is no option to rotate the screen or to do a 3D spin on the city model -- but the sprites and detail level are astonishing for a game that is running on a smartphone. In fact, Sim City for the iPhone looks even better than Sim City for the Nintendo DS. This version is pretty much a port of Sim City 3000 and besides some tweaking and UI changes, it plays almost identical.

If you are a fan of the series and have always wanted a portable SimCity then this is it. EA has done a fantastic job of putting a true to form Sim City experience in the palm of your hand. This rendition of Sim City is worth every penny of the $9.99 USD asking price and will offer players many hours of enjoyment.

SimCity (v.1.0.0) for the iPhone was tested on an iPhone 3G 16GB with Firmware 2.2 installed. EA recommends you have the latest version of iTunes installed and for best gameplay results, reboot your iPhone/iPod Touch before playing.