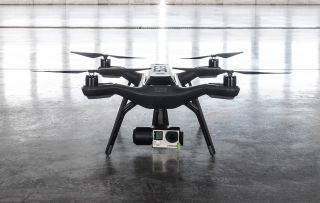 BERKELEY, CALIF. — For novice drone pilots, few things can trigger a rush of panic like being handed the controls for a $999 drone and being told to take 'er on up. Yet, there I was on the roof of drone maker 3DR's office building, ready to send one of its Solo drones skyward on a fairly breezy morning as a row of power lines looming menacingly close to my launching pad.

I've flown a few drones prior to this, but only under ridiculously unchallenging circumstances with someone who knew what they were doing ready to seize the controls at the first sign of trouble. This 3DR Solo test flight felt more like a newly licensed driver being handed the keys to a race car at the Indianapolis Motor Speedway and told to bring the vehicle back in one piece.

As it turns out, I needn't have worried too much. The Solo may be a pretty sophisticated drone, but 3DR designed it with an eye toward taking some of the guesswork out of operating the quadcopter. An onboard computer on the drone itself can handle flight or camera duties — or both, if you set things up that way. I may not have much flight time under my belt, but on this particular day, I was able to pilot the Solo around 3DR's headquarters, capturing some pretty smooth-looking video in the process.

I paid a visit to 3DR's office not just to try my hand at flying one of the company's drones but to also get a glimpse of the software that powers the quadcopter. "The software is really the calling card," Roger Sollenberger, 3DR's editorial director, told me as part of an overview on what helps the Solo take flight.

The software powering the drone not only manages the Solo's autopilot capabilities but also powers the special camera effects that have made the Solo an appealing choice for capturing video since its debut last year. 3DR calls those features Smart Shots, and they're impressive to see in action.

I'm particularly enamored with Orbit, which sends the Solo in a circle around a fixed point. As the drone circles, the camera remains locked on whatever it is you're filming, adding a dramatic swirling point-of-view to your shot. I took the Solo for a preprogrammed spin around a silo located right next door to the 3DR office. Using the controller, I could adjust the altitude and the radius of of the Solo's orbit, while the camera continuously captured smooth, steady video.

Other Smart Shot tricks up the Solo's sleeve include Follow, in which the drone will stay on your tail as you move, keeping its camera focused on you; Selfie, where the drone pulls back and up to turn your self-portrait into a landscape shot; and Cable Cam, where the Solo stays on a steady flight path as if it's traveling along a wire. That lets you pan and tilt the camera without having to keep the drone on course.

A software update last month from 3DR expanded Cable Cam's reach. Now pilots can set up flight plans with multiple points, allowing the Solo to capture video as it moves from point to point. I tested a prerelease version of the multipoint Cable Cam feature, first swooping down over a railroad track and then later flying in an arc around the vicinity of 3DR's office. (This week, 3DR released an aerial analytics platform called Site Scan that lets you use the Solo drone to survey work sites using a Sony Xperia tablet and cloud support from Autodesk.)

I could adjust the speed with which the drone moved to each point; I could also control the camera, panning and tilting until I had the view I wanted. It's an impressive feature that produces professional-looking shots, even in the hands of a novice like me. (The software update also adds a new capability to the Follow Smart Shot, giving pilots full control over the camera when in Follow mode, though I didn't get a chance to test this enhancement.)

3DR has other tools in the works, including a flight school app that acts as a flight simulator for would-be pilots. The app will let people familiarize themselves with the drone's controls before the Solo ever leaves the ground. 3DR's flight simulating app is slated for a release this spring.

That said, the controller for the Solo was simple enough to use that I felt pretty comfortable with it by the end of my 15-minute flight. In addition to the standard toggles for adjusting direction and altitude, the Solo's controller cleverly buttons for operating the camera on its top side. Those buttons let me do everything from adjust the camera's tilt to start recording video. I also appreciated the controller's pause button, which makes the Solo hover in place while you get your bearings, and the haptic feedback that alerted me when the drone's battery was getting low.

Not everyone is going to want a $999 drone with a price tag that climbs to $1,399 when you include a 3-axis gimbal. But the fact that a newbie like myself could pilot the Solo — and come up with some pretty sweet-looking footage thanks to the Smart Shots feature — makes 3DR's drone a compelling option for videographers who want to take to the skies.