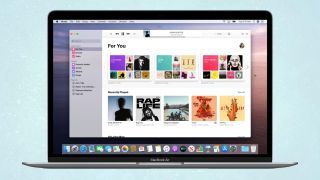 Now that your Mac (be it a MacBook Air, iMac, or any other macOS machine) is telling you that a major new update is here, it's time to talk about if you should update now, or wait. And unlike most updates, macOS Catalina gives some users a serious reason to hold off for now.

So it's time to answer your questions about iTunes' death, the end of the line for 32-bit apps and Sidecar mode, which turns the iPad into a second screen for the Mac. Here's everything you need to know about macOS Catalina.

iTunes didn't get to see its 19th birthday, as Apple killed the media manager that launched on January 9, 2001. In its place, we've got a trio of apps: Music, Podcasts and TV, which split the monolithic app into the same set of apps you get on other platforms.

The great news for long-time iTunes users such as myself is that iTunes' power user features didn't die with the app's name. For example, you can still upload your own tracks to iCloud Music Library (the major reason why I haven't ditched Apple Music for Spotify) and you can still edit metadata tags for your music.

Even better, Music has one new feature that Spotify's desktop version doesn't: lyric integration. When you're listening to a song, click the little icon in the top left corner to see said lyrics. Hopefully it catches up to iOS' Music app some day by highlighting the lyric you're currently hearing.

Oh, and there's one iTunes feature that didn't get moved to those other apps: device management. When you connect an iPhone or iPad to your Mac, you'll now edit settings for that gadget in Finder. It makes sense, acting just like external hard drives.

Apple Arcade, one of the most exciting service Apple is launching this year, is bringing Apple's treasure trove of games to Macs. Will this solve the years-old gaming drought that Mac gamers have been feeling?

That's not exactly a given, yet, but this is a good start. I'm excited that I can play the trippy Sayonara Wild Hearts racing game on every Apple device I own, not just my iPhone. Apple Arcade is also bringing the Dark Souls-like Bleak Sword, the genre-bending card-game/rogue-like Card of Darkness (from Pendleton Ward, the creator of Adventure Time and mobile games genius Zach Gage).

Just don't expect every Apple Arcade game you see on your iPhone to appear on the Mac. We're not sure if these titles will take more time to arrive, but the beautiful puzzler Assemble With Care, as well Lego Brawls and Sonic Racing, are not in the Mac App Store.

The biggest reason to wait before downloading Catalina is because this update bricks older apps. Yes, programs written in the 32-bit format are not supported by macOS Catalina, which is the culmination of those system warnings we've all been getting about how some apps need to be update.

We've got a full guide to finding the 32-bit apps on your Mac, which you'll need to do before updating, so you can learn if any of your super-critical programs will stop working on Catalina. Hopefully, those apps now have 64-bit versions, as Apple has been warning developers about this impending change for a while.

Once you find your 32-bit apps, Google those apps to find out who makes them, and use the contact information to ask if 64-bit versions are available. The folks behind OpenVPN, an app I rely on for my job, showed me its 64-bit version, and I'm glad I asked them for the help, as I couldn't find it on the company's site.

Your Mac and iPad love each other so much that they're practically getting married, thanks to Sidecar, a new feature in Catalina that allows you to tether the devices (even wirelessly). As cool as this is, though, there's one thing you need to know about how it works: you'll want an Apple Pencil.

When we first heard about Sidecar, we were a bit too optimistic, hoping that Apple made a touch-screen friendly version of macOS. It turns out, however, that your fingertips can't interact with macOS on the iPad, as they can only tap and activate the Touch Bar-like buttons on the sides of the screen. To move Finder windows and perform other tasks, you'll need the Apple Pencil, as macOS is still designed to be used with a cursor, or in this case, the stylus' small tip.

macOS Catalina's Sidecar won't work with Macs made before 2014

macOS Catalina gets iPad apps (and it needs more soon)

In exchange for 32-bit apps dying, Apple's adding a new category of apps from one of its other devices: the iPad. These apps arrive thanks to Catalyst, a new tool that Apple gave iPad developers, gave them the ability to easily convert iPadOS apps to macOS apps. This is especially important for smaller app studios, where only a few people are in charge of building and maintaining an app.

So far, we've seen major apps including Rosetta Stone and TripIt by Concur show up on the Mac, and even indie darlings, such as the Lire RSS client, are also here. I've got my eye on other iPad apps, such as the Overcast podcatcher and Twitch, that I'd love to see on the Mac.

Reminders, Apple's check-list app for managing your to-do's, always felt a little sparse, especially as third party apps (such as Todoist) gained ground. That changes in macOS Catalina, which adds natural language recognition, and the additional levels of complexity that your increasingly complex life needs.

For example, I was able to set a recurring reminder by writing "every other day," which the Reminders recognized and let me apply.

The app lets you create lists of reminders, which I use to split up my day job, personal life and other various assignments. You also get new filters, to see reminders due today, those scheduled for the future and those flagged as a high priority.

macOS Catalina's Find My app finds all your iStuff

The Find My iPhone tool, once stuck on iCloud.com, finally has a desktop home. It can also see where all of your other items, including Macs and AirPods and iPads, are as well. This new app, Find My, is located in your Applications folder.

I've never really loved Apple's own podcasts app, but this latest version blew my mind with its new search tricks. Not only does its search engine scan titles, descriptions and authors, but it also manages to find words in the actual audio of podcast episodes.

Built with Siri and machine learning, this new feature works so well it found the times my name was mentioned on The Polygon Show by my friend Simone de Rochefort.