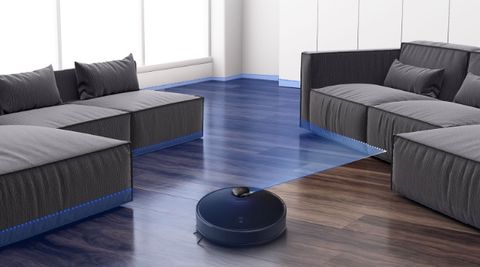 Robotic vacuums make keeping your home clean a whole lot easier than it otherwise would be, and robotic vacuums from the likes of Roborock have gotten much more high-tech over the past few years. Perhaps the most notable change it that the most high-tech robotic vacuums now use laser-based navigation systems over camera-based ones.

There are a few things that make laser navigation systems so much more precise. Camera-based systems, for example, can really only see what’s right in front of the camera lenses — and even with multiple cameras, there may still be pockets of missing information. Considering the fact that vacuums then need to process massive amounts of visual data, the end result is pretty imprecise. Laser systems, on the other hand, can scan a room hundreds of times per second — meaning that they’ll always have an up-to-date view of a room and objects in that room.

Once that map has been created, it means that you can clean the room with much more precision. You’ll be able to see a map of your house on a phone, for example, and pinpoint a room, or even a particular spot in a room, on a map. That’s perfect for things like cleaning up after a spill or cleaning the room of your messy kid, rather than having to clean the whole house. On the opposite side of that, using that ultra precise data you can also pinpoint areas you don’t want the vacuum to clean. You might, for example, be worried about the vacuum cleaning near a fragile object. For example, the Roborock S6 can easily create a real-time map of its environment, ensuring that it cleans your home as precisely as possible.

Of course, no one’s house stays exactly the same at all times — but the fact that laser navigation systems work so quickly means that they can see changes to your home in real time. You can even move things around while the vacuum is working, and it’ll be able to adapt to those changes.

Perhaps the biggest advantage to laser navigation systems over camera-based ones is that laser systems can work in all lighting environments. Cameras require light to work properly, and that means that you can’t really set a camera-based robotic vacuum to work at night, or even with the lights off. With laser-based navigation systems, you can set your robotic vacuum to work at night while you’re asleep, meaning you can wake up to a clean house. Alternatively, you can set it to work when you’re away from the home — meaning you don’t have to keep the lights on when you’re out of the home. That’s really what robotic vacuums should be able to do, after all. The Roborock S4 is a perfect example of this — it can use its laser navigation system to work, even in dark situations.

The end result of a more precise system is energy savings, and you can’t argue with that! Because the vacuum is more precise, it won’t have to clean for as long as it would with a camera navigation system, nor will it have to clean with the lights on — so there are plenty of ways you could save on energy costs.