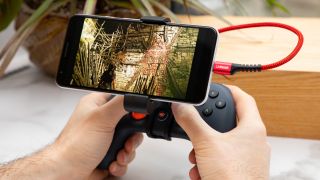 It’s been a rocky launch for Google Stadia, the game-streaming platform from the world’s most popular search engine.

While the ambitious technology mostly works, it’s still missing a number of features, including the ability to buy games without a Premium subscription, sync the controller wirelessly to phones and PCs, get 4K resolution without a Chromecast Ultra and play on iOS devices. However, Google has finally implemented an important feature: achievements. You can now see all the in-game achievements you’ve earned — provided you’re on the right platform.

Google announced the news in a tweet, along with a few hints on how to use it. (It’s not as easy as it seems; more on that later.)

“Our achievement system is here and you will now receive notifications when playing on desktop, laptop, and TV,” it reads. “You can view your full achievement list on the web, including all the ones you’ve earned since you began playing Stadia.”

For the record, Google is as good as its word. I went back and checked my games on Stadia, and was pleased to find that I’d been accumulating achievements in every game I touched, from Just Dance 2020, to Gylt, to Shadow of the Tomb Raider. If I continue to play these games on a TV or PC, my new achievements will pop up in real time.

There are two caveats to this setup, however. First and foremost, eagle-eyed readers may have noticed that “Android” is not one of the platforms listed in the tweet. Indeed, achievements notifications aren’t yet available on Stadia’s mobile app. If you get an achievement while playing, you won’t know it, and you’ll have to check it out retroactively on a computer.

That’s also not as easy as it sounds. When I first went to check my achievements, I thought that perhaps I had to clear my cache and reload the page, because I could not find them anywhere. There’s no drop-down menu when you select a game, nor do they show up anywhere in your profile settings.

Instead, you have to click on your Friends list (the two people with the “plus” sign in the upper-right), then click on the Achievements button. From here, the rest of the process is simple, but I’m not sure why Google hid this feature in a menu that’s not really optimized for it.

As for the achievements themselves, they’re much like trophies on PS4. Each game has a different number of achievements (from 23 in Gylt up to 99 in Shadow of the Tomb Raider), and they cover standard stuff like completing chapters and undertaking side quests. If you’re an achievement hunter, you can rest easy that Stadia has them available; if not, you can ignore them and play the way you want to play.

It’s good to know that Google is working to implement all of Stadia’s promised features, but it’s less encouraging that there’s no hard timetable just yet. Fans who are waiting for Stadia to reach its full potential will have to keep waiting for at least a little longer.