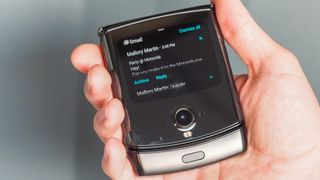 The newly unveiled Motorola Razr brings back one of the previous decade's premier cell phone designs but with a 2019 spin — flip open the phone and you're staring back at a 6.2-inch OLED screen. It's an eye-catching design that also enables you to slip a foldable phone easily into your pocket — if you can swing the four-figure asking price.

Yes, the Motorola Razr will be an expensive phone, costing $1,499.99 when it goes on sale next month. If there's a silver lining, that's nearly $500 less expensive than the $1,980 Galaxy Fold, a rival foldable device from Samsung.

Verizon looks like it will be the exclusive carrier for the Motorola Razr at launch. At the phone's unveiling tonight (Nov. 13), Motorola said that pre-orders for the Razr will begin at Verizon on Dec. 26. The phone will reach stores in January 2020, with Verizon and select Walmart locations offering the Razr. You'll also be able to buy the phone directly from Motorola.

Canadian shoppers will be able to buy the Motorola Razr sometime in early 2020.

You won't have to pay that $1,500 all in one fell swoop if you don't want to. Verizon will let you pay off the Motorola Razr in installments, spreading out monthly payments of $62.49 over two years.

It's unclear at the moment if Verizon will offer any deals for the Motorola Razr, but we'll update this article with any pre-order specials as they're announced.