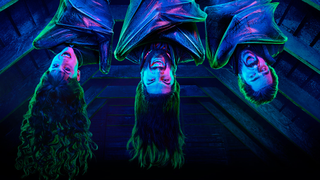 AUSTIN, TX — I never expected 2014's What We Do In The Shadows — a brutally awkward and funny mockumentary about vampires living in New Zealand — to get its own TV show. And even when news broke that FX hired the writer/director duo of Jemaine Clement (Flight of the Concords) and Taika Waititi (Thor: Ragnarok) to adapt their classic into an episodic series, I was still not exactly sure it would live up to its legacy.

Turns out I was wrong, as I just saw the first episode of the series, which screened at the SXSW festival and delighted the audience. Even with a whole new cast of blood-suckers and vamp-adjacent humans — as well as a new location — the pilot episode of What We Do In The Shadows had me in stitches and ready for more.

The show maintains the high-quality banter of the film through two means. Firstly, the premiere features the work of two great writers Stefani Robinson (Atlanta) and Tom Scharpling (Ant-Man and the Wasp), who find the laughs in awkward adults who live with each other as roommates, and also thirst for human blood.

On top of that, the cast is top notch, especially Matt Berry (The IT Crowd) and Mark Proksch (The Office, UK), who play two of the vampires, with the latter exhibiting a unique supernatural skill that turns into an excellent gag.

And at the core of the show, you've got two relationships with tons of dynamics to explore. Nandor (Kayvan Novak) is a vampire who's worked with human Guillermo (Harvey Guillen) for a decade, but doesn't show much appreciation to his assistant. Berry plays Laszlo, who's dating their other roomate Nadja (Natasia Demetriou), and neither of them appears to have much intent to be faithful.

All in all, this adds up to a solid set-up for a series that has 10 episodes in the can (the pilot will debut on March 27) that should garner enough attention and praise for a second helping.