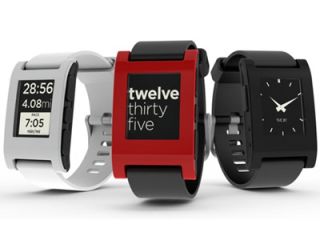 History of the Smartwatch

On Jan. 13, 1946, comic strip detective Dick Tracy strapped a "2-Way Wrist Radio" to his arm and spawned an unlikely love affair with high-tech watches that has now endured for nearly 70 years.

The cultural fascination with having endless power not in a hand but rather just a few inches above it is a curious one. In 1979, author Douglas Adams summed up the mania of the time perfectly in the seminal "The Hitchhiker's Guide to the Galaxy," describing Earth as "an utterly insignificant little blue green planet whose ape-descended life forms are so amazingly primitive that they still think digital watches are a pretty neat idea."

Fast-forward to 2013, where one of the most talked-about products comes from a little company called Pebble, a business that came out of a record-setting Kickstarter campaign. Pebble raised an astonishing $10 million (it had only asked for $100,000) because of deep interest in its sole product: A smartwatch with an E Ink display that could be customized in myriad ways. You can get your incoming texts piped from your phone to your wrist! You can run apps on it! It's waterproof!

Is it possible that the smartwatch has truly, finally arrived?

Today's smartwatch lacks a commonly accepted description. Some are mini-PDAs that fit on your wrist (Pebble), some are more luxe analog watches with tiny digital screens embedded on their face (Martian

Watches). Some are designed to run apps (Sony SmartWatch), some you can even talk into just like Mr. Tracy (Kreyos Meteor). Some are now being equipped with cameras (Neptune Pine).

The near-universal key, though, is that smartwatches get their jobs done by communicating with the smartphone in your pocket. By leveraging a wireless connection to your handset, the smartwatch of today can do all kinds of tricks that weren't possible a few years back.

Today’s smartwatches receive text messages and Facebook updates from your handset, control media playback, run apps and — yes — tell time. The biggest advantage of a smartwatch is that, instead of having to whip your phone out of your pocket upward of 150 times a day (seriously, count it sometime), you can take a quick glance at your wrist to see why your phone is buzzing you. Smartwatches don't just tell time — they should save you time.

There's no telling how big this market might be, but many analysts are quite optimistic. Canalys recently announced its prediction that more than 5 million smartwatches would be shipped in 2014, nearly 10 times the number of sales predicted for 2013.

From SPOT to Pebble

No failure in the smartwatch space is more glaring than Microsoft's experiment with the SPOT watch. Introduced in 2004, the SPOT was a self-contained, stand-alone device that received news headlines, weather updates and Outlook appointments via a quirky, subscription-based FM radio service called MSN Direct. The devices didn’t have enough capabilities and cost $10 per month to operate. As a 2004 Gizmodo review put it (not quite accurately, but succinctly nonetheless), "I don't feel like paying a yearly fee to tell time." Microsoft finally killed the project in 2008.

It wasn't until a few years ago that the industry moved toward using smartphones as the brains for smartwatches. It's hard to pinpoint the very first connected wristwatch — Fossil was shipping its first Bluetooth- connected watches as early as 2006 — but a steady trickle of these devices started arriving on the market around 2010.

The idea was fairly simple: to be a sort of one-way, remote viewscreen for your phone, letting you stream data feeds such as weather forecasts and email messages from your pocket to your wrist. This shift didn't just make smartwatches more powerful. Chucking all the traditional guts required to run a portable computer also dramatically reduced the size of the device to something you might conceivably wear on your arm.

Bill Geiser, the original smartwatch evangelist who pioneered the MetaWatch in 2004 while he was part of Fossil, has watched this business crawl to its feet since the days when the Motorola RAZR was the hottest phone on earth. "These products didn't do very much, but they were very well-received," he said. "The people who bought them were enthusiastic about them. But if you stopped 100 people at the time and told them this idea, 99 would tell you you're nuts." The need just hadn't arrived, as habitual phone-checking had not yet become a national addiction.

Sure enough, nothing made much of an impact until 2012, when things abruptly started to pick up. That’s when Pebble blew through its funding goals on Kickstarter. On the surface, the Pebble watch is a fairly unassuming device. It's available in a handful of colors and the screen is small and black-and-white. Oh, and it doesn't look like a pebble at all.

But thanks to Kickstarter preorders and an auspicious deal with Best Buy, the little watch that could has commanded some 275,000 sales, a mind-boggling number for a company that is still wrestling with its training wheels. To put that number in perspective, Apple sold fewer iPods than that in the iconic music player's first nine months on the market.

Now the smartwatch market seems poised to explode, driven by a perfect storm of economics and technology: Cheaper MEMS sensors, better Bluetooth, and the mass adoption of smart phones by consumers.

There are now at least half a dozen smartwatches now on the market, and many more are in the works.