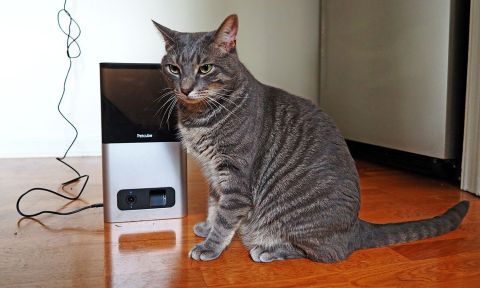 While pricey, the Petcube Bites is a fun way to check in on your pets remotely and send them treats.

Hi, everyone! It's Mervin, and I'm back to review yet another treat-dispensing pet cam. This one, the Petcube Bites, costs $249, which means nothing to me, but my owners think it's pretty expensive. They also seem to think it's pretty cool. All I know is that over the past week, I've eaten a ton of treats.

I've gotten a lot bigger since I tested the Petzi Treat Cam, and now, I'm a full-grown, 14-pound cat. My taste in technology has become a bit refined, too. For one thing, I think the Petcube Bites is a lot nicer-looking than the plasticky Petzi Treat Cam. With its brushed-aluminum base, the Petcube matches my owners' stainless-steel appliances, which they seem to like.

The Petcube is also built a lot more solidly. Unlike the Petzi, which had a spring that fell out, the Petcube Bites feels like it's made to last. It's a lot easier to load treats, too: Simply remove the lid on the top. Walter (my big brother) and I tried to paw it open, but had no luck.

As if by magic, the Petcube Bites whirred to life, and then shot out a bunch of treats. My owner said something about how he could adjust how far the treats were flung using a smartphone app, but I was too busy eating.

Then, he showed me video from the Petcube, which looked a lot better than the video from the Petzi (which is just 640 x 480). I hear that's because the Petcube has something called a "1080p camera," whatever that means. I could easily see myself and Walter, especially when he sat down right in front of the camera. Unlike Petzi's camera, the Petcube let my owners record and save video clips.

My owners also seemed to really like the other stuff they could do with the Petcube Bites using their phone. They showed me how they could send me treats by pressing and moving a little dog bone on the screen, and that they could schedule when treats were delivered. So that's how it's done!

They also showed me how they could see video clips from other times Walter or I walked in front of the camera, even in the middle of the night, when I went for a snack. I showed up in black and white, but I could still make out my stripes. It even caught me when I jumped up on the kitchen counter. I would be embarrassed, but I have no shame.

A few times, when my owner wasn't home, I heard his voice coming out of the Petcube. A second or two later, treats came flying out all across the floor. Walter and I ate well that day!

Because the camera activates when it senses motion, it records everything it sees, so there were a lot of clips of my owners just walking around the kitchen. There's no way to delete a lot of recordings at once, either. It's a good thing that you can put the camera into a Sleep mode so that it doesn't detect and record events.

If he wanted to, my owner could get alerts on his phone every time the Petcube Bites sensed motion. He could also pay to get 10 days of video history for $10 a month, or 30 days for $30 a month. That's three times as much as real security cameras, like the Nest Cam,offer. I have a feeling he'll stick with the free 4-hour history. After all, he can save clips to his phone, and most of them were just a few seconds long.

I'm not sure if the Petcube Bites will stick around my house. I hope it does, but my owner says that $249 is a lot to pay for something that just gives treats to Walter and me, and lets them see video of us. It's a lot of fun, though! Now, back to my nap.

When he's not sleeping, Mervin the Sheriff of Rottingham can be found looking for birds on Twitter at @sheriff_mervin.