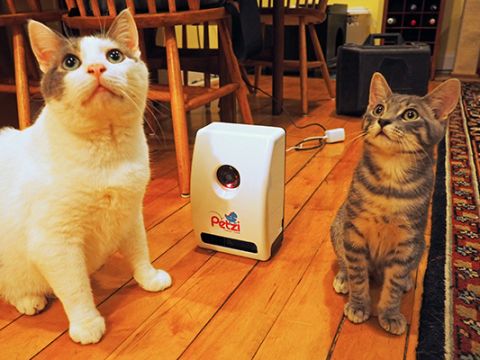 A true first-world gadget, the Petzi Treat Cam lets you remotely view and feed your pets.

When I'm not sleeping, playing or cleaning myself, I'm usually eating. During a typical day, I like to wake my human minion just before the sun rises, by meowing loudly, nibbling his toes or both. But my servant is gone for most of the day, and he removes my food bowl when he leaves. What's a hungry kitten like me to do? Fortunately for me, he brought home the Petzi Treat Cam ($179). This thing is pricey, at least to those who worry about money, but it gives me treats when no one is home.

What's in the Box?

I was pretty psyched when my human caretaker brought home a new box. The outside said "Petzi Treat Cam," but I was more concerned about whether I would be able to sit in it. Being a small kitten, though, I fit into it really well.

But there was something else in the box: a big, shiny, white-and-black rectangular thing with a big circular eye in the front. Also in the box were three bags of treats, two for dogs (ugh) and one for cats. Annoyingly, my human servant wouldn't give me any, but instead dropped them into the shiny, boxlike thing with the eye.

He then spent the next 15 minutes looking at the box, then looking at the small black rectangular thing in his hand that he sometimes holds up to his head and makes noises into (he calls it an iPhone, whatever that is). He seemed really irritated, like when I jump on the kitchen counter, until he said something like, "reset button." At least that's what it sounded like. I really only know my name.

I Can Haz Treats?

My human minion then placed the shiny, black-and-white box on the floor and left it there. All of the sudden, it made a funny noise, and a few seconds later, a bunch of treats flew across the floor. Sweet! I wasted no time eating most of them, but my furry companion, Walter, was quick to help himself, too.

As Walter and I were eating, I heard my human minion's voice coming from the shiny box. That's pretty weird, I thought, but I was too busy getting my fill of snacks. And it's not like I actually come when he calls me anyway.

After I ate, I wanted more snacks. But I couldn't get them out of the box. Walter even knocked it over, but the treats still wouldn't come out. What kind of fiendishness is this? Something that only feeds us randomly?

Later, my servant-person showed me pictures he took using the Petzi thing of Walter and me eating. They were OK, but looked a little blurry. He said he wanted to show me video, too, but wasn't able to record it from the Petzi camera onto his iPhone, because the Petzi app didn't allow it. He also said that he couldn't hear me meowing, as there's no microphone on the Petzi itself. He also seemed a little annoyed that the power cord for the Petzi was so short that he needed to use an extension cord to place it where he wanted.

One other problem popped up: A small spring, which helps push the treats across the floor, came off after the first day. Minion was able to reattach it, but afterward, the spring still had trouble getting the treats out of the Petzi.

The Petzi Treat Cam is a near purrfect device. It gives me food, and it lets my human servant check in on me when he's away. The video quality isn't going to replace the Dropcam, but then again, that camera can't feed me. I just wish the Petzi could save videos, or let me upload them to YouTube, so I could become the next Maru. But I'll settle for a nice snack and a good scratch behind the ears.

When he's not sleeping, Mervin the Sheriff of Rottingham can be found looking for birds on Twitter at @sheriff_mervin.

Michael A. Prospero is the Reviews Editor at Laptop Mag and Tom’s Guide. When he’s not testing out the latest running watch, he’s probably using the latest kitchen gadget. Follow Mike at @mikeprospero. Follow us @TomsGuide, on Facebook and on Google+.