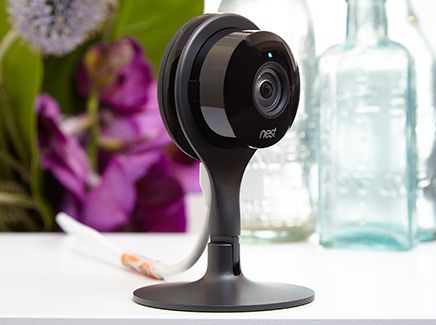 As the successor to Dropcam, the Nest Cam continues to set the standard for wireless home security cameras.

Thanks to its easy setup, clear video and integration with other smart-home products such as the Nest Learning Thermostat and Nest Protect smoke alarm, the Dropcam Pro has been our top-rated wireless security camera.

Its excellent successor, the Nest Cam, delivers even sharper 1080p video, top-notch night vision, and improved sound and motion alerts, which is why it's one of the best home security cameras you can buy.

Update (August 2019): Google is updating the Nest Cam so that users will no longer be able to turn off the camera's status light; while you will be able to dim the light, it will always glow green while the camera is on. Additionally, when streaming live video, the Nest Cam's light will blink; the ability to disable this function is also being removed.

The Nest Cam sports a sleek design, with a smooth, cool-gray metal stand supporting a glossy black camera eye that very much makes one feel as if one's being watched. The magnetic base provides stability for the camera while supporting a slim, pivoting leg that attaches to the lens. At the top of the lens is a single LED that flashes blue when the camera is trying to connect to the network, and stays solid green when it's on and recording.

The convenient, 10-foot power/USB cord plugs into a microUSB port in the back of the camera. The USB portion disconnects from the plug prong, allowing the camera to plug into any USB port, such as on a laptop or desktop. The Nest Cam comes with a magnetic base and a wall-mounting plate and hardware, giving you several options for camera placement: on the wall, standing on a flat surface on a tripod or even stuck on the fridge.

The camera's small size and cleverly engineered adjustable stand — as well as its wide, 130-degree lens — give you convenient flexibility when it comes to defining the area you want to capture. The entire unit measures 4.5 x 2.8 x 2.8 inches, with a leg that rotates 180 degrees, and the camera head atop it that rotates a full 360 degrees.

One of the major pluses of the Nest Cam is its crisp 1080p streaming video. Coupled with the camera's wide-angle lens and 8x zoom, the picture quality is tough to beat.

Nest has also upped the ante with enhanced night vision, which is more impressive than you would expect, considering that Nest doesn't sell it as the camera's best feature. The camera's 3-megapixel lens, which is ringed by eight LED lights, picks up impressive detail, though there's still is the typical motion delay associated with home security cameras.

You can set your preferences, in either the desktop interface or the mobile app, to receive sound and/or motion alerts from the Nest Cam. You can't tweak the settings; each kind of alert is simply either on or off.

The device was designed to trigger fewer false alarms (cars passing, shadows moving, etc.) than the Dropcam Pro. However, you don't get the maximum benefit of this "advanced sensing" without subscribing to Nest Aware.

The Nest Cam has a scheduling feature, so you can choose which hours of the day you want the camera to be on and recording, and when to turn it off so that your TV-watching time isn't recorded.

The Nest Cam also gives you the ability to talk and listen through the camera. The feature is like a two-way baby monitor; you can check in on and coo at your pets from the office, say "hi" to the kids when they get home from school or even spook an intruder. It's worth noting that the camera's basic intercom attributes are just that — basic. The quality of the sound in either direction is certainly not hi-fi.

Another unique feature is the camera's compatibility with other Nest devices. If you own Nest's Learning Thermostat and set it to "away," the Nest Cam will automatically turn on. With the Nest Protect carbon-monoxide-and-fire detector, if smoke is sensed in the home, Nest Cam will automatically record a clip to capture the events and help you figure out what happened.

The free Nest app for Android and iOS is basic and straightforward. A simple home page displays all of your installed Nest devices, with a drop-down menu giving access to settings and account information.

You need to simply click on the Nest Cam icon, and any cameras you have set up in your home will be displayed by a photo icon and the camera's name (e.g., Living Room, Bedroom). You're then taken to the live video stream, where you can view and listen to your video, use the talk option, zoom in and change your settings.

To get the full perks of the Nest Cam,, you'll have to pay to subscribe to the Nest Aware app. Recently updated for better performance, the app gives you video history and alert summaries, allows you to specify "activity zones," and will record continuously for 10 or 30 days.

Nest Aware comes with one feature particularly worth noting. With the app's starting subscription rate of $5 per month, your camera will use "advanced algorithms using depth sensing and face detection" to produce more accurate sound and motion alerts. It won't tell you who's who, but it can tell if someone enters a room — and helps ensure that you receive fewer false alarm alerts while you're away. Here's how Nest's cloud-storage plans compare to Ring and Arlo.

The app will also record a short clip every time it sends you an alert, so you can review the footage later, if necessary, to see what triggered the motion or sound sensors.

Nest Aware also includes a couple of fun, creative options. It lets you create short clips from your video footage and share them through social media outlets like Facebook and Twitter, as well as your own time-lapse videos.

When played on a smartphone, the 1080p footage from the Nest Cam can make your family room look almost like the set of an action film. The advantages of this upgrade in resolution from the Dropcam Pro — which maxed out at 720p — are clear.

It's true that the 720p default setting on the mobile app will load video faster when your Internet signal is weak, but viewing the 1080p footage on a strong connection is second to none. With sharp focus and silky-smooth video, it is truly high-definition. There was a slight, roughly 1-second delay in real-time viewing, but lag time is not a problem for the Nest Cam.

The Nest Cam's 130-degree range of vision — one of the widest available — and its 8x zoom allow for maximum flexibility in surveying your palace. Placing the camera in a corner will capture the entire room, and then some. You can view a full-screen stream from your smartphone, tablet or computer; while larger screens show more detail, the video appears slightly darker.

MORE: Smart Home: A Guide to Products, Services and Security

The Nest Cam's 8x zoom works quite well, allowing you to pinch and zoom in or out on a certain area on your touchscreen device. It's a nice feature, but doesn't capture a great amount of detail when fully zoomed in, even when employing the "enhance" function.

However, the Nest Cam's night vision is phenomenal: clear, well defined and plenty bright. You can activate night-vision mode manually to capture low-light areas; it will also turn on automatically when the lights go out.

One of the unique selling points of the Nest Cam is its "talk and listen" feature, which functions almost like a walkie-talkie with video. When viewing your remote stream (which captures decent audio) you can press the Talk button on the app to be connected to a speaker on the camera.

On the front of the camera unit, a blue flashing light will appear and a beep will sound as a signal for someone on the other side to talk. The idea is that you can talk to your pets or family through the camera — or perhaps scare off an intruder by shouting at him remotely.

I'll admit to having some fun while testing this feature. On the app, you can set the camera to give an alert beep before you begin talking, or you can let your voice project without warning. I tried the latter setting on my girlfriend, and let's just say she was not amused.

Nest boasts up and down that installation literally takes only a minute. And, surprisingly enough, it really does. I plugged the camera into the wall and then downloaded the Nest app, which is available for iOS and Android. From there, it's a matter of filling in a few information fields.

When you set up a new account with Nest, the app will walk you through a quick setup before giving you the option to add the Nest Cam by scanning the QR code on its back plate and connecting it to your Wi-Fi network. Five seconds later, you can watch yourself finishing the setup from your smartphone.

One of the beauties of the Nest Cam is that it works with other Nest home devices, such as the Nest Protect and the Nest Learning Thermostat. If you already have one of these products, you just have to visit your Nest app and click "Add."

Both the mobile and desktop apps are easy to use and have fairly intuitive settings. You can change the alerts you get, the "talk and listen" settings and more.

The Nest Cam is a superior security camera that offers easy setup and usability. The camera's wide-angle lens and crystal-clear 1080p resolution are truly high-def, and the night vision is unbeatable.

These features don't come cheap, though. At $199, the Nest Cam is a bit of an investment, and additional benefits and add-ons cost extra. Still, with Nest Aware, you can store up to 30 days of footage in the cloud, and you'll get app enhancements such as more-sensitive motion alerts.

Although the Nest Cam works with other Nest devices, like the Nest Learning Thermostat and Nest Protect, the Nest network is not a home-automation system. But for painless operation, solid security footage and the ability to interact with (and through) the camera, the Nest Cam is a great choice.